I was able to stop in at Hide-A-Way Hills briefly yesterday morning, and check out Ohio's only currently known nest of Mississippi Kites. I recently wrote about these kites HERE, and HERE. As previously reported, there is one chick in the nest, and it is continually being stuffed with cicadas and other goodies by the adults. As a consequence, Junior is growing like a weed, but is still heavily beset with white down and is still a ways from making its inaugural flight. It appears that we are still on track to aim for Saturday, August 13, for the 2nd annual Kite Day.
Thanks much to Melissa and Elizabeth for getting me into the high security Hide-A-Way Hills compound so I could make these photos and issue this update. And please forgive the lack of crisp frame-filling photos. My biggest lens is a 300 mm, and we really need the big boys and their 500 and 600 mm's to adequately deal with these high-flying kites. 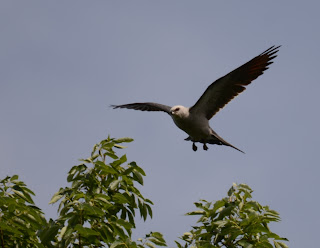 An adult Mississippi Kite launches from its favorite sentinel tree, just a stone's toss from an active nest. We saw both adults, and one or the other would spend a fair bit of time at the summit of this tree, scrutinizing all of the happenings in the area, including us. At one point, a Pileated Woodpecker foolishly entered the sphere of the large white ash in which the kites have made their aerie. As if shot from a cannon, the guard kite hurtled from its perch and into the ash, bushwhacking the woodpecker and delivering a raking blow. In turn, the woodpecker bolted from the tree is if he had been shot out of a slingshot. 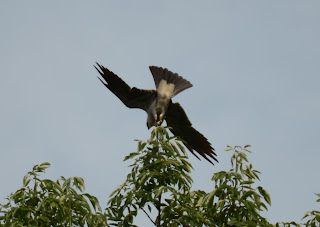 An embarrasingly ungraceful landing. We pretended not to notice. Once airborn, Mississippi Kites are impeccable aviators. 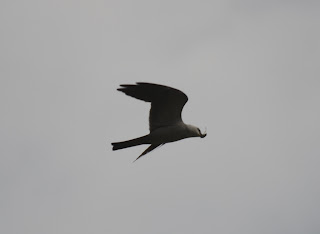 An adult wings towards the nest, carrying prey which is probably an annual cicada. As dramatic evidence of their flying abilities, the kites deftly pluck these fast-flying if somewhat clumsy insects from the air. Much more impressive is ther ability to snag dragonflies on the wing. Few animals can outfly a big dragonfly, but they've more than met their match in these kites. 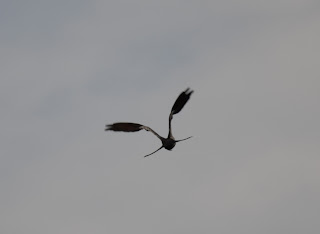 This shot shows the incredible versatility of the wings and tail of these birds. While a Mississippi Kite is not all that much smaller than a Peregrine Falcon in dimensions, it weighs little more than a third the weight of the falcon. This translates to an incredible bouyancy, and an astonishing ability to jig, jag, dive or accelerate with extreme rapidity. Small tweaks and flicks of the tail or primary flight feathers send the bird onto a new course, instantly. If using a car analogy, the kite would be a Mazda Miata, the falcon, a Bugatti Veyron. 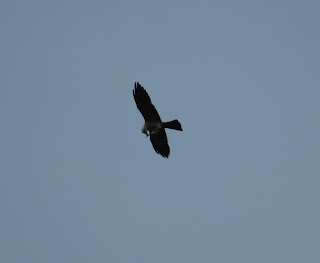 Not every scrumptious cicada is delivered to Junior - the adults have to eat, too. Here, one eats its prey on the wing, adeptly transferring the morsel to its bill while tracing languid circles high in the sky. 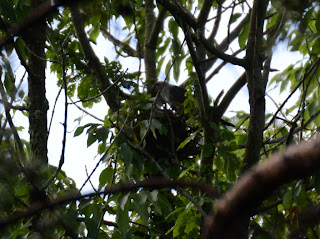 It's hard to see through the dense foliage, but that's the nest with an adult kite stuffing something into the young kite. This nest is in a good place, high in the spindly boughs of a white ash, where few predators of substance can get at it, and where the adults can keep an eye on it. Except, they chose an ash. We've not yet seen any sign of the emerald ash borer here, but it's coming. That's another story, though, and we - or the kites - don't have to worry about that issue in Hide-A-Way Hills at least for a while.

How can we sign up for Kite Day? I had to work last year and really want to see them if possible.

We'll give as much notice as possible, and just have interested parties email a contact - likely me - so we can get their names on the list. The Hide-A-Way Hills security staff has to have names of guests in order to let them in.

I put you down Howard, but we don't know for sure tht the 13th will be the day. I'll keep everyone posted.

On the way to vacation last Saturday I spotted a Swallow-Tailed Kite. My first.