I love to get out at night and look for critters that one doesn't ordinarily see during the day. Tonight afforded an opportunity to slip off to an interesting patch of woods just a stone's throw from my house, and the following photos were made during this brief foray. 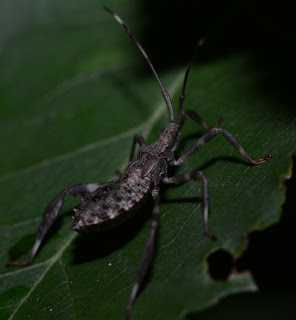 A wheel bug nymph, Arilus cristatus, stalks the leaves looking for victims. An army of predators emerges under cover of darkness, and the nighttime forest can truly be a dangerous place. 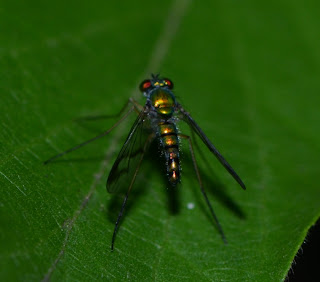 One can often find "sleeping" creatures such as this beautiful long-legged fly that are normally active by day. Assuming you can adjust your camera's flash correctly, it can actually be easier to photograph animals such as this fly at night. During the day they are hyperactive and often tough to approach. 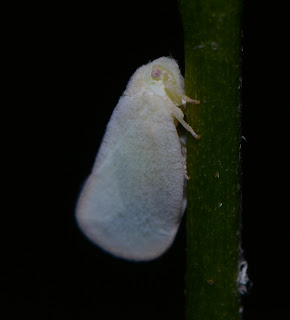 A flatid planthopper at repose on a stem. Planthoppers are stipule mimics; they resemble the little flap of tissue where a leaf petiole joins the plant stem. During the day, planthoppers will nestle into the base of stem-leaf attachments and they look just like part of the plant. They become more active at night, and I saw a great many this evening. 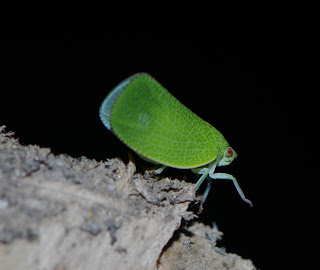 Another type of planthopper, probably one in the genus Acanalonia. Note how the wings are impressed with venations that greatly resemble the veins of a leaf. Planthoppers are great leapers, able to jump many times the length of their body. Adults and the odd-looking fuzzy nymphs pierce plant tissue with needlelike mouthparts and extract sap. 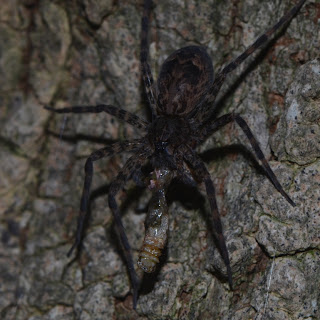 I was quite pleased to shine my light on a tree trunk and see this spectacle - a common fishing spider, Dolomedes tenebrosus, in the act of consuming a caterpillar. This spider is one of the big ones, with a leg span of up to four inches. They enter homes on occasion and strike terror into the hearts of the occupants. But like nearly all spiders, they are utterly harmless unless you are something such as this caterpillar. 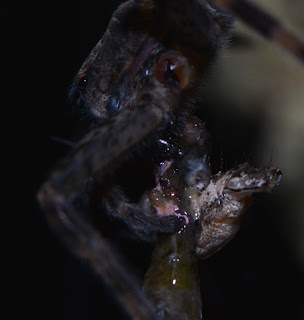 I was able to get in pretty close, as the spider was preoccupied. In this photo, you can see her fangs piercing the caterpillar's soft tissue - a bit like jamming steak knives into a rotten banana. This is, no doubt, a very nutritious meal for the spider. 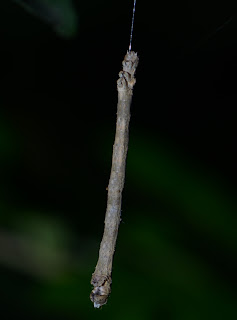 To live life as a caterpillar is to live in great peril at all times. During daylight hours, birds, tachinid flies, and various parasitoid wasps will be hot on your heels. At night, hunters such as the aforementioned fishing spider lurk. So, caterpillars have evolved incredible crypsis, or camouflage. This is a caterpillar in the massive geometrid family, the adults of which tend to be plain jane little brown moths. I noticed it because this "twig" was dangling where a twig shouldn't be and a closer look revealed the silken strand from which the caterpillar was dangling. 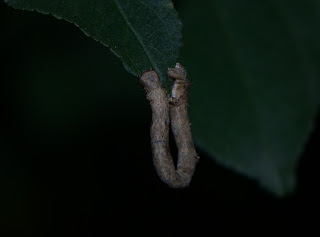 I gave the caterpillar a tap or two and it scuttled up its silken rope and adopted the classic inchworm pose that gives this group of caterpillars the name "loopers". During the day, loopers such as this one affix themselves to similar sized twigs and freeze stiffly in place. Good luck spotting one then. 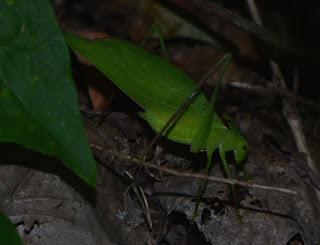 This locale always has a decent population of oblong-winged katydids, Amblycorypha oblongifolia, and their song is rather easy to learn. It sounds rather like a frog to my ear; sort of a rib-itt! The song has good carrying power and can be heard some ways off. The katydids are not particularly shy and it usually isn't too hard to find one of the singers. 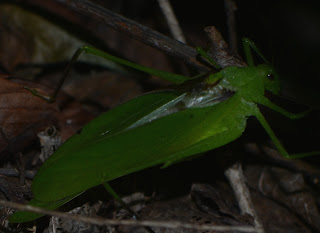 I caught this one in the act of "singing". To make its call, it rubs a file-like projection across a roughened "scraper". That brown area just behind the head is termed the stridulatory area, and the animal is revealing its translucent wing bases as it rapidly vibrates the wings and scrapers to create its song.
at July 29, 2011

What is your secret for getting such good night shots? Do you illuminate with a flashlight, or some other device, then shoot? Does the light bother the critter? Please do tell!

Thanks Auralee. I'm still learning. Usually I find the subject with the aid of a flashlight to help focus the camera on it. The real trick is using full manual exposure, way underexposing the shot, and letting the flash compensate. I have an adjustable flash stack that clips onto the camera's hotshoe, and I usually turn it to the lowest power flash adjustment, and might shoot with apertures of F11 and shutter speeds of 125, 160 or more to keep the shot from overexposing.

In most cases, just using the camera's full auto settings seem to result in badly blown out or everexposed images at night.