The chittering horde has arrived. Bedecked in pinks and greens, with bill tips crossed over as if torqued with a pair of vice-grips, the White-winged Crossbills have invaded Ohio. No one is complaining.

Indeed, few winter finches cause the stir amongst birders that crossbills do. Doesn't matter if they are White-winged or Red (we've had a few of the latter, too) - either species is exciting. Of course, the Reds bring their own set of problems. It seems as if there are eight "types", someday to be species? If these entities are ever foolishly split, and suddenly we've got eight "species" of Red Crossbill roaming the landscape, crossbill madness will ensue among the listers and all sorts of crossbill experts will arise from the mire of dubious taxonomic decisionry. Have fun, bird records committees. But that's another story. 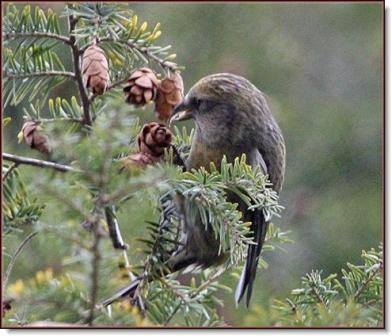 Yesterday, Aaron Boone found one White-winged Crossbill at Green Lawn Cemetery in Columbus. Today, Bernie Master found about three dozen there. I suspect they all came in today, as an increasing number of crossbills sweeps south of the Great Lakes from their boreal forest haunts. Bernie took this outstanding photo of a female attacking the cone of an Eastern Hemlock, and the photos that follow.

The mandible tips of crossbill's bills do just what the name says: they cross. These contorted beaks enable the birds to more effectively pop the scales from the cones of conifers and get at the seed sheltered within. They no doubt play a vital role in the ecology of the vast boreal forest in terms of dispersing the fruit of spruce, fir, larch, hemlock, and pine. In the scheme of things, the conifer-dominated northern forests are quite young, much of the area that they occupy having been steamrolled by glaciation some 10,000 years ago.

Thus, the crossbills are still assorting themselves and actively evolving as they nomadically exploit the various species of cone-bearing trees. Think Darwin's Finches of the north. Conifer fruit varies greatly, from the dainty little cones of hemlocks to the massive mini-pineapples produced by White Pine. So, the crossbills - Reds in particular - are hard at work evolving a bill for all sizes. Compounding the madness is that all conifer species are cyclical in their cone production - lean year, lean year, boom year, lean year - or similar cycles. This probably accounts for the nomadic wanderings of crossbills, and their occasional en masse peregrinations to the south. A further wrench in our understanding of how all this works is that the same species of conifer might have boom production in one part of its range, and bust production in another. 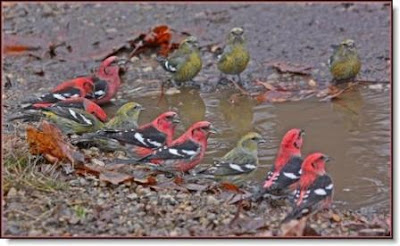 An awesome shot by Dr. Master. We can all only wish we had been there. A parcel of crossbills descended to a puddle to bath, and probably take grit. The males are a rather extraordinary pinkish hue, especially when young - in my opinion, not only the showiest of the crossbills, but one of the best-looking North American passerines. They are great fun to watch. Social in the extreme, crossbills are often very tame and allow close approach. They remind me of little parrots as they clamber about the branches, tearing cone scales off and sometimes using their bills to help pull themselves about.


Crossbills are talkers, too. Non-feeding flocks emit a constant twittering, and that's how most of them are detected initially. Be aware, though - intensely feeding birds are often silent, the only sound being created is that of the pop and rip of cone scales being shucked, along with the visual of little cone shards drifting down from above. 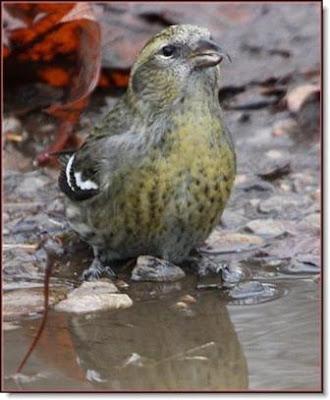 This female is allowing us a close view of her crossed mandible tips. A great shot by Bernie here. They give their beaks a workout. One bird can allegedly dig out and eat a few thousand seeds a day. Imagine what several dozen birds might do to a stand of hemlock. Multiply all of the crossbills throughout the boreal forest and it is easy to see why they play such an integral role in northern forest ecology.

Beautiful map by Ethan Kistler of the White-winged Crossbill situation to date in Ohio, but I suspect Ethan will be making regular updates to the map. Looks like over 300 birds reported thus far, and they'll be many more to come, I'm sure. We haven't had an invasion like this for some time.

If you've got a park or cemetery nearby with lots - or even a few - big ornamental conifers, especially hemlock, go check it out. You might be rewarded with some of these parrotlike pink crossbills.
at December 04, 2008

What great pictures. I have seen them in IN only one time. My lifer, at a friends feeder, many years ago.

The bulk of the crossbills seem to have kept right on moving through southeast Michigan and down to your neck of the woods.

I wrote a piece some time ago on the whys and hows of the direction crossbill bills cross. It's still the subject of study.

Interesting. I'll have to look around when I'm home for Christmas. We've had them here in NJ/NY too.