A perennial and favorite topic, whenever serious birders band together, is the NEXT GREAT BIRD. Such chatter reaches the level of a psychosis, really. We all fervently dream of the NEXT BIG ONE, and of course, secretly or not so secretly hope that we are the ones to find it. Rarely happens, though. Once in a while it does, and most of us who have been peeking through the bins long enough have some cool find or finds to claim.

But the one depicted below MAY be the most coveted AYTBSUTMRTITLACORB (as yet to be seen ultra-thrilling mega-rarity that inflames the listserv and cements one's rep bird) for Ohio birders. We're due, and it'll happen eventually. They've been seen everywhere else in the Midwest, it seems.

I know it's first on my list of rub the bottle genie pops out and grants any wish bird.


Fork-tailed Flycatcher, Tyrannus savana. It occurs widely in Central and South America, but wanders regularly far to the north. One or at best a few might appear in the States each year, generating lots of excitement. Not only is it rare here, but just have a look at the thing! Who wouldn't want to see this!

This photo kindly provided by Gary Meszaros, one of the country's top nature photographers. Gary resides near Cleveland, but just picked off the Fork-tail on a recent Florida trip. The streamer-tailed beauty was at Pelican Island National Wildlife Refuge, and even made the press. Allegedly this was Roger Tory Peterson's last North American lifer.

Speaking of Gary Meszaros, be sure and check out his galleries of work. He's got some of the finest natural history photos, anywhere. I'm flattered that he agreed to collaborate with me on a book featuring the very best of Ohio's remaining natural areas. It should be out early this spring. 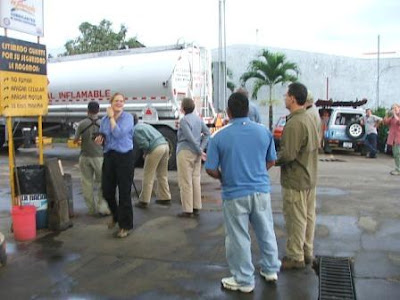 Quick Fork-tailed Flycatcher story. Gas station in San Isidro, Costa Rica, where our birding group had stopped to refuel on a February 2006 trip. Most of the folks are with our group, and the woman in the blue shirt, facing the camera, and giddily stamping about is Jen Sauter. Why?

Because we had just seen a Fork-tail! I had gotten out to stretch, and saw the bird on a distant snag, so we all roared out of the van, and set up a scope right in the parking lot. Not being overly bashful about sharing thrilling birds, we soon had most of the locals present, including the driver of that big rig, queued up for looks at the bird through the scope. They, too, seemed thrilled.

Birds like this are great ambassadors for the feathered crowd.
at December 17, 2008

We had this handsome brute in Indiana last year. It was a treat/lifer for both my husband and I. People came from everywhere to see it.

Can't wait to see your book.

Jim
Maybe your post will bring us good luck for our state Ohio to get to see the Forked-tailed Flycatcher this coming year! IT WOULD BE NICE. Saw the Scissor-tailed a few years ago in the plains states, very pretty birds with those long tails!
Gary Wayne