Return of the Cave Swallows!

Like clockwork, those wacky Cave Swallows have returned, albeit briefly, to the Great White North. We had a Kirtland Bird Club trip last Saturday, led by John Pogacnik, and we visited a number of the east of Cleveland Lake Erie hotspots with Cave Swallow foremost on our minds. And there were plenty of other birders out and about along the lake this day, hitting the tried and true spots.

Then, Sunday - wham! There they are. Larry Richardson and Jan Auburn found seven of these long-haul swallows of the southwest at Bradstreet's Landing in Rocky River just west of Cleveland. Not only that, but they hung around all day and many people got to view them. This is not the norm. Most of the Ohio Cave Swallow records have been flybys - if you weren't on the spot at the moment they strafed by heading to who knows where, you missed them. Virtually unchaseable.

I was tied up with stuff on Sunday and didn't become privy to the reports until the afternoon and by then it was too late to make the Rocky River run. But I was intrigued by reports of a few of the swallows entering a crevice in the metal wall of the Bradstreet pier not long before dusk, apparently seeking shelter from worsening weather.

I saw my opportunity. Figuring that the Cave Swallow or swallows would attempt to overnight it in that pore in the pier, I thought that my best chance would be to arrive on the scene this morning, well before daylight, and see if they were indeed still holed up. Swallows are diurnal - daytime - migrants, so this seemed a reasonable plan.

So, it was up at 3:15 this morning and off by 4 am, arriving at Bradstreet Landing around 6:30. Upon arrival, it was plenty dark, somewhat windy, 28 degrees, and snow flurries. Not what one would typically think of as swallow-chasing weather.

The scene of Petrochelidon Fest '08, Bradstreet Landing, Rocky River. The swallow - just one as it turns out - was holed up in the wall of that pier not far from where the tall light pole is. When I got there, I walked out as far as I could on that sand spit and from there had a great view of the hole where the swallow had secreted itself. Only problem was, it was too dark to tell if anything was in there. It was kind of a surreal morning. As the break of day loomed and things became lighter, it seemed more certain that there indeed WAS a birdlike shape huddled in the orifice of the rusted bulwark. Lighter and lighter, and finally, with the hole and shape filling my scope field, it moved! Yes!

The swallow lived! By now the viewing wasn't bad and the lone Cave Swallow is starting to shake and shiver, probably in an effort to get the blood flowing. Another birder arrived and we both were treated to wonderful views of the swallow as it stretched and gazed out on the world, probably wondering if it was in the midst of a bad dream. This ain't Texas! Finally, at 7:25 am it darted from the hole, promptly shot over the pier and disappeared out over Lake Erie headed west. This was truly a case of the early bird getting the worm, and I am very glad that I got up there as early as I did, or I never wold have seen this one. For what it's worth, #357 in Ohio. 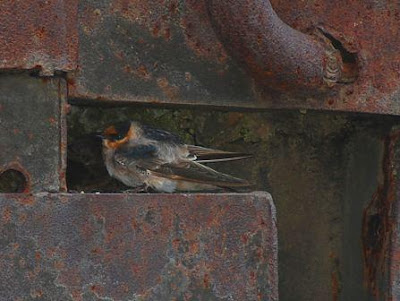 The Cave Swallow in its abode. Thanks to John Pogacnik for letting me use his photo, taken yesterday afternoon. It was too dim this morning for me to get any photos. I suspect this is the same bird, though, and that's the niche he/she was in this morning.
Ohio's first Cave Swallow record dates to November 5, 2005, when the aforementioned Pogacnik confirmed at least one individual but saw 13 other swallows too far to ID but they too were almost certainly Cave Swallows. Several dozen others turned up in the next week and a half, and on November 20 one was found dead in Lakewood, providing the first Ohio specimen and confirming that it was Petrochelidon fulva subspecies pelodoma, the subspecies that occurs in the southwestern U.S. All of the vagrant eastern Cave Swallows that have been found dead or photographed well enough to tell have proven to be this subspecies.
We've had at least a few Cave Swallows along Lake Erie in November every year since. Is this a new pattern of dispersal, or did birders just start to notice them? I vote strongly for the former. The region of Lake Erie where our records come from is one of the most heavily covered areas of the state by birders, and has been for a long time. Unlikely that people just started to notice Cave Swallows in 2005.
Our observations mirror the overall explosion of recent records in the east, too. The first eastern Cave Swallow record in the U.S. north of Florida dates to 1990 at Cape May, NJ. There have since been about three dozen occurrences of swallows there, and it is now regular and to be expected at Cape May in November. Since then, increased numbers have been reported throught the eastern Great Lakes. This November, I know of the following records:
November 8 - Quebec, 2; Wisconsin, 2; Delaware, 3; Pt. Pelee, Ontario, 8; Connecticut, 10
November 9 - Ohio, 7; New Jersey, 5; Ontario, 6; New York, 1; New Hampshire, 1; Wisconsin, 1
November 10 - Ohio, 1; Ontario, 1; Connecticut, 2; Indiana, 3
The overall Cave Swallow population in the southwest is booming, so there are far more birds to wander. This species first turned up as a nester in Texas in 1914, and was found breeding in New Mexico in 1930. For some time, they only were known to breed in a handful of caves, such as at Carlsbad Caverns. In about the last twenty years, they have learned to use culverts and bridges as nesting sites, and thus greatly expanded their sitable breeding locales. It will be interesting to watch the spread of Cave Swallows over future years, and see how far north and east the breeding range creeps.
at November 10, 2008