This stunning image of a rather rare blackbird, for us Ohioans, comes courtesy of Aaron Boone, who snapped this photo on November 1 in Champaign County. When seen like this, the iridiscent silky tones of the plumage are apparent and one can see why Brewer's Blackbird has sometimes been dubbed the "Satin Bird" or "Glossy Blackbird". Thanks to Aaron for sharing this photo with us. 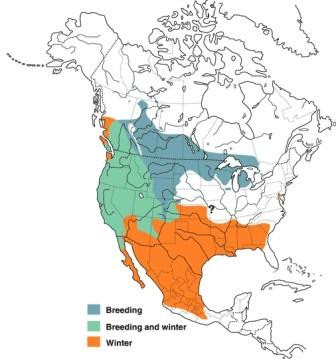 The range of Brewer's Blackbird, map courtesy Birds of North America online. Look how close it comes to Ohio as a breeder in Michigan. There as yet is no Ohio breeding record, but I think that this species could well be found nesting here. Extreme northwest Ohio is the place to look, and Williams County would probably be the numero uno hotspot. I think next year it is time to organize a "block-busting" weekend in Williams County and finally pin this species down. We'd find lots of other interesting species as well.

Below is a piece I wrote about possible new additions to the Ohio breeding bird roster, published in the inaugural edition of the Ohio Breeding Bird Atlas II newsletter. I hope that the prediction comes true!

Brewer’s Blackbird. It is almost surprising that this species has not been documented nesting in Ohio yet. Brewer’s Blackbird would be easy to overlook, as possible nestings would be in a region that isn’t heavily birded, and it would certainly be possible to dismiss them as other more common blackbirds like Common Grackle without a careful look. They would also likely occur in towns, parks, farms or other well-settled and relatively uninteresting areas that could easily be ignored by birders.
Brewer’s Blackbirds began an eastward expansion around the 1920’s, and have colonized as far east as southern Michigan and eastern Ontario, Canada. This species has an interesting relationship with Common Grackles where the two come into contact. There is competition between the two species, and in some areas grackles dominate and apparently exclude Brewer’s Blackbirds in suburban sites. In less populous open field and brushland habitats, Brewer’s have dominated. Brewer’s has bred within fifty miles of Ohio in Michigan, and Fulton and Williams counties would be key areas in which to search. Look for them at places like Lake La Su An Wildlife Area in Williams County, the Maumee State Forest in Fulton, Henry, and Lucas counties, and in or around small towns in this region.
at November 05, 2008

Jim,
Is Brewer's in Magee Marsh in spring? I believe we have seen it during birding at Warbler weekends?