Eastlake, Ohio, just east of Cleveland. Hard on the shore of Lake Erie, it is distinguished by that large power plant looming in the backdrop. As part of its operations, thousands of gallons of heated water are regularly spewed into the lake, attracting scores of Gizzard Shad. Also working in our favor here is the nearby Chagrin River, which confluences with Lake Erie just to the east. The reaction of river water hitting lake water seems to also attract lots of fish.
The upshot is, if you are a fish-eater, this place is the horn of plenty - a piscine paradise. And Red-breasted Mergansers are as into scaly swimming things as a Londoner is into fish & chips. 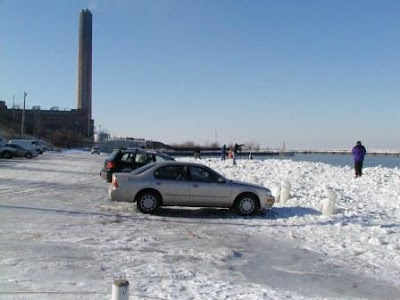 Of course, it does get cold here. In fact, in a good winter - a winter as winters ought to be - the lake freezes solid. But not the pool of water behind the plant. When conditions are as above, the winter birding is spectacular.

But by then, when ice has overtaken Eastlake, most of the Red-breasted Mergansers are long gone. Now into early to mid-December is the time to catch one of Ohio's most sensational avian shows. This is the time for massive swarms of migrant sawbills (a colloquialism for mergansers) to gather. On Tuesday, I saw tens of thousands between Eastlake and Mentor, which is a bit further on east. Some estimates from skilled observers have put the total sawbill count seen in one day in this area as high as 200,000.

The central basin of Lake Erie is indisputably a global hotspot for this duck.

This video gives one a taste for the number of birds here. This was shot on Tuesday, and according to locals the birds had been present in much greater numbers in the few days preceding. And the video doesn't begin to show all the mergs that were present. Scanning out on the lake with my scope, giant swirling storm clouds of Red-breasted Mergansers were visible on the horizon.

Truly a spectacular show, and an act worth catching.
at November 21, 2008

I loved seeing the blizzard of Sawbills. I have never seen this many in one place before. It must be awe inspiring.

I am cold just seeing where you have been birding lately. I think that Lake front birding is some of the coldest birding I have ever done. Usually if I Lake front bird it is over by Chicago, Michigan City area.

Wow...lots of mergansers...i am wondering if the fish are safe for them to eat in that area...

Gees, Jimmy Mac, you make me miss Lake Erie. And to think I lived in a lakefront home til I was 17 and did not know about birding! For shame! I could see the power plant in your pics from my backyard.
Thanks for the vicarious visits to my home state!

Hey Janet L - long time! And you don't have it so bad where you're at - I'm envious! Pine Warblers at the feeders, beautiful hills, highest trillium diversity on the globe, boatloads of Sandhills nearby, and Al Gore!