Eastern Screech-Owls are everywhere. Because they are so strictly nocturnal, few people other than knowledgeable birders see them. But, the uniformed often hear these small owls. Their weird, quavering whistles are certain to catch any ear, especially at close range, and the listener won't be able to help but to wonder what the source is.
Suburbia or wildlands, it makes no difference. There'll likely be screech-owls nearby. In fact, it's likely that no one reading this is further from a mile away from one of these eared owls, and probably much closer than that. For instance, participants on the 1981 Toledo Christmas Bird County tallied 112 owls in the 24-hour count period. This in only a 15 mile diameter circle!
Jim Dolan from up in Columbiana County sent along a few fascinating photos of some Eastern Screech-Owls. The photographer was Kathy Dyke, and I'm grateful to her for letting me use them here. 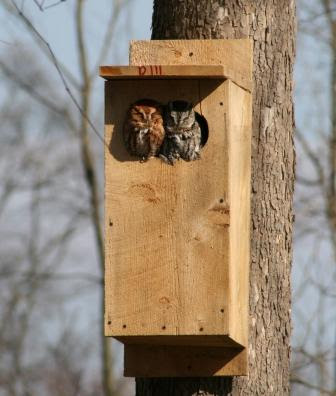 This is one of the coolest photos I've seen of this species. They have appropriated a nest box that was built specifically for one of Ohio's rarest breeding birds, Common Merganser. Little Beaver Creek, which flows through Columbiana County and is one of Ohio's most pristine streams, supports Ohio's only breeding population of these saw-billed fish-eating ducks. In an effort to bolster merganser populations, Jim Dolan and compadres have installed a number of these boxes. Like Wood Ducks, Common Mergansers are cavity nesters.

The little hooters didn't care who put this box up, and why. Apparently they felt it fit them just fine. Here we see them attempting to block any merganser who might try and enter :-) 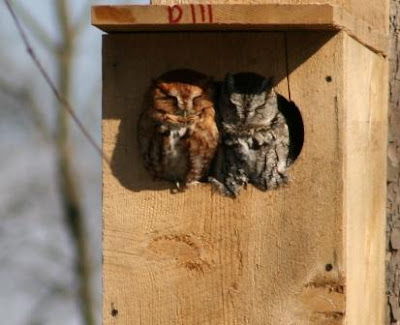 What's more amazing is that this pair is of mixed morphs - both a red and a gray screech-owl. Data shows that gray morphs become increasingly common northward in Ohio, while reds and grays are about equally common in the southern part of the state. But, you don't often see the two together like this! There is a rare brown morph, intermediate between the two. Perhaps we'll get a brown bird from these two, who knows.

Columbiana County is one of the most beautiful areas in Ohio. It is full of interesting breeding birds, and there are probably lots of interesting and unexpected finds to made there. With that in mind, Jim Dolan has organized a "blockbuster" for Columbiana County as part of the ongoing Ohio Breeding Bird Atlas II. It'll be the weekend of June 7 & 8. I'm going up, and I believe Atlas coordinator Aaron Boone is too, along with a number of other birders. Should be an interesting and fun time. If you would like to participate, we'd like to have you. Just flip me an e-mail at: ambrosia@columbus.rr.com and I'll get you details.
at May 26, 2008