I've spent some time the past few days searching for one of the coolest plants in Ohio. I'm lucky in that the only known populations are within 15 minutes of where I live. Spreading Rock Cress, Arabis patens, is an outstanding little mustard that is an obligate saxicole; it must grow on exposed rock faces. And therein lies the rub. Invasive plants like rocky ledges, too, but more on that in a bit.
Spreading Rock Cress is only known from a few limestone gorges along the west side of the Scioto River in Franklin County, and the populations are tiny. I think I've seen them all, and even found one or two, and I'd say that the total number of plants in the Franklin County gorges numbers maybe one or two dozen. Two days ago I visited a site that had several dozen ten or so years ago, and couldn't find any. This plant is slipping away before our eyes.
Fortunately, a few years back Mark Dilley and I located a population just over the Franklin County line in Delaware County, which supports far more plants than all of the other sites combined. A visit there this morning located perhaps 80 individuals, but this site is also being invaded by weeds.
The rich Scioto River floodplain was filled with a diversity of spring flora this morning, including many Large-flowered Valerian, Valeriana pauciflora, one of our showiest spring species.
Typical Spreading Rock Cress habitat. These steep limestone gorges are one of the most interesting aspects of natural history in the Columbus area. Unfortunately, many of them have suffered the ravages of rock mining, overdevelopment, abuse from rock climbers, and increasingly, invasion by invasive plant species. This gorge is probably the least disturbed one around here.


Spreading Rock Cress is not the easiest plant to get at. Taking good photos is often tough. Here it is - the little white flowered plants - adorning a small ledge some 40 feet above the creek, and in a nearly unreachable nook. Which is good; it's away from people and pickers, but still not safe from other overtaking plants.

Here's a flowering specimen jutting out into space, high above a gorge I'd not want to fall into. Ohio plays a real role in the history of this extraordinary little mustard. Spreading Rock Cress was first collected and descrbed to science by botanist William Starling Sullivant in 1842. 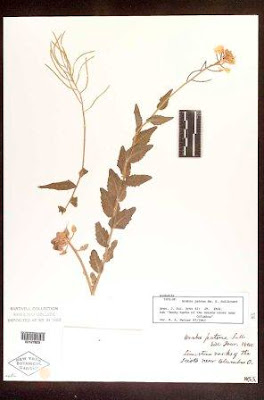 This is a photo of Sullivant's original specimen, collected 166 years ago and housed at the New York Botanical Garden. The label says "Limestone rocks of the Scioto near Columbus, O. 1842" We have no idea exactly where along the river Sullivant made this collection, but it was no doubt within a mile or two of where I took these photos this morning. Back in Sullivant's day, long before invasive plants and development, Spreading Rock Cress was probably a locally common species.

Rare plants can be considered rare for a number of reasons. Some are merely overlooked. They are so obscure and so few people look for them or can recognize them that few reports are made. When an inspired botanist or two set their sights to really determining the range of some of these obsurities, they prove to be far more common than originally thought. Some are rare only in certain political boundaries where they are on the edge of their range. These are still vital to protect, but that's a whole different topic.

Then there are the bona fide rarities. Spreading Rock Cress is one. It is a conspicuous, even showy, species that occurs only in a very well-defined and relatively easily searched habitat. There are no problems with confusion with similar species, and blooming plants stick out like sore thumbs.

Spreading Rock Cress halfway up an inaccessible cliff face. Nonetheless, the bright white flowers can be seen from quite some distance. I use my binoculars when botanizing, too - something more botanists should do. Through my 8 x 42s, I can spot Spreading Rock Cress from extreme distances, and thoroughly inspect otherwise hard to study cliffs. Then, good cameras like my Panasonic FZ-30 with 12x zoom make it possible to document the find.

Here's the main reason we're losing our rock cress. These ledges in the above photo no doubt used to harbor Spreading Rock Cress and other cliff-dwelling native species, but now are completely overrun with invasive plants. The worst, by far, is Garlic Mustard, Alliaria petiolata. It chokes cliff ledges, utterly pushing out native competitors. Others make their way on to the cliffs, too, like Amur Honeysuckle, Lonicera maackii. From above, nearby homes send down their escapees who jumped the garden wall, like English Ivy, Hedera helix and Wintercreeper, Euonymus fortunei. The latter two are vines that literally smother everything if they take hold.

This map depicts the total distribution of Spreading Rock Cress. It is listed as critically endangered or extirpated (locally extinct) from nearly every state it occurs in. I wonder if there is anywhere left that still supports vigorous, healthy populations. It seems to me that this beautiful little mustard is a prime candidate for federal listing.
at May 24, 2008