A smashing good time was had at the OOS's fourth conference, held at the magnificent Mohican State Park Resort. The festivities began last Friday, and we wrapped everything up yesterday. In the process, all of the birders on various field trips radiating out through the region picked up about 140 species, including many a life bird for many a person. I want to thank everyone who does such a wonderful job making these enjoyable and memorable events, particularly Jen Sauter, who truly is masterful at orchestrating these affairs. A big thanks to all who so generously donate their skills and time; you know who you are, and so does everyone that was there.
A pastoral scene near Mohican. Although this conference is mostly about forest birding, we hit other habitats, too. In the habitat above, we found Grasshopper, Savannah, and Vesper sparrows.

At the other extreme, we hit dense shady hemlock gorges littered with massive sandstone slump blocks calved from towering cliffs. Many excellent boreal breeders, quite rare in Ohio, were found in the gorges. Some of these included Canada and Magnolia warblers, Blue-headed Vireo, and Winter Wren.

During pre-conference scouting, we turned up an alfalfa field full of Bobolinks. Before heading along to our field trip locales, most groups stopped by to take in the spectacle of the R2-D2-like bubbly gurgles of testerone-riddled males courting admiring females. In the process we found and got great looks at other goodies like Northern Harrier and American Pipit.
My field trip co-leader was Peter King, OOS treasurer. He had just purchased an outstanding new scope from Time & Optics, and like an infant with a new teddy bear, he lugged it everywhere we went. Which was good, as we had everything from Orange-crowned Warbler to Scarlet Tanager to Bobolink to Indigo Bunting filling the view-finder for all to admire. I snapped this shot of an obliging Swainson's Thrush through Peter's prized possession.
We also had great evening field trips, which included bat-banding in the Mohican gorge. Merrill Tawse, bat researcher extraordinaire, graciously accommodates our trips, assisted by his son and other volunteers. Bats are fascinating and certainly misunderstood, and Merrill does a tremendous job educating people about them. This is a Northern Long-eared Bat that they caught in their mist nets. Looks a bit like a furry Mr. Spock. 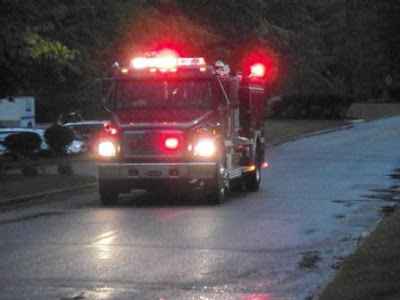 We all had the wake up call of wake up calls when, at 6:04 on Sunday morning, an alarm system malfunctioned, tripping the alarm system. Not knowing it was a malfunction at the time, the entire lodge evacuated. All of the local volunteer fire departments came on over for a look, too. Lemonade came from these lemons, though, as that false alarm held us up just long enough for the rain to quit, and by the time we got in the field the great out-of-doors had turned into the most glorious spring weather possible. And I'm sure we'll look back on that uncalled for wake-up call with fond memories, eventually. Photo by Ernie Cornelius. 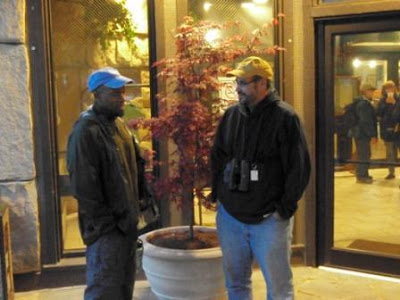 Waiting for clearance to re-enter the lodge for breakfast are Dudley Edmondson, left, and Michael Packer. Dudley gave an outstanding program on Saturday evening featuring some of the finest nature photography to be found. A Duluth, Minnesota resident, Dudley travels the country making photographs, and shared his recent journey to Nome, Alaska with us. He finished his program with an overview of his book, Black & Brown Faces in America's Wild Places. Dudley is at the forefront of encouraging minority participation in outdoor activities, and shares that message eloquently. Michael, as last year, delivered a stellar evening program on astronomy, greatly aided on both evenings by night skies that were clear as a bell and studded with stars. Photo by Ernie Cornelius.
Our other speaker were Dana Bollin and Bill Thompson, both of whom were awesome. I'll try and share other photos of them and others later, and talk more about the conference. Watch for a detailed write-up in the next Cerulean newsletter, along with photos.
A big thank you to all who came, and in addition to all of the Ohioans from Cleveland to Cincinnati to Whipple, we had participants from Kentucky, Michigan, and Arizona.
I just returned from an interesting meeting where we plotted out what will probably become the 2009 OOS conference, in conjunction with another should-be-phenomenal event. We look forward to announcing the details of the '09 affair soon - stay tuned!
at May 19, 2008

Bat banding--how interesting!
Is this something snyone can participate in, or would you have to have some previous experience. I'd love to see these some time!

I also appreciate your promotion of events to come--very often, I find out about something after-the-fact, and wish I had known about it. It's nice to get a heads up!
Thanks for all your very pertinent info!