Last Sunday was a fantastic immersion into natural history, high on a ridgetop in rural Washington County, Ohio. A bunch of us were guests of Julie Zickefoose, and we explored her property and some nearby lands. A highlight was nocturnal mothing and caterpillar-hunting. Many interesting finds were made. I'll hope to share some more of them here, eventually.

While nighttime mothing activities yielded scads of moths, including some very notable species, for me the most noteworthy was a day-flyer and one I had not seen before. It follows... 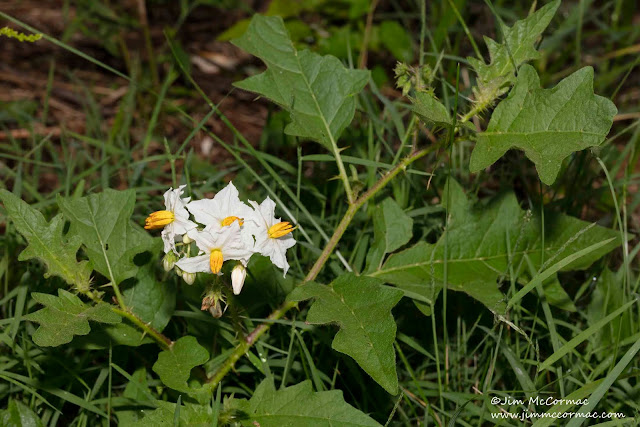 We must begin this short tale with a familiar plant; a species many of you have probably seen. It is Horse-nettle, Solanum carolinense, an inhabitant of old fields, barren ground, and open areas often disparagingly referred to as "waste places". It isn't a nettle at all, but a member of the nightshade family (Solanaceae), the same tribe that produces tomatoes and potatoes. As a native group the nightshade family is small, with only six Ohio species. Most of those (4 species) are ground-cherries in the genus Physalis, and there's one other native Solanum, the Black Nightshade, S. nigrum.

If one can ignore the prickly stems, Horse-nettle is certainly the showiest of our native nightshades with its clusters of ivory flowers (sometimes light violet), each with a prominent cluster of lemony anthers, Later, small yellow-orange fruit that resemble elfin tomatoes will form - these are said to be deadly poisonous.

Weedy and widespread Horse-nettle may be, but it produces one of the most interesting moths in eastern North America. The caterpillars of the scaly marvel that follows eat only this plant. Julie took us to a dry ridgetop meadow rich in Butterfly Milkweed, Asclepias tuberosus, and scattered about were many Horse-nettle plants and other interesting flora. And it was here, amongst the plants that spawned it, that we saw the following moth. 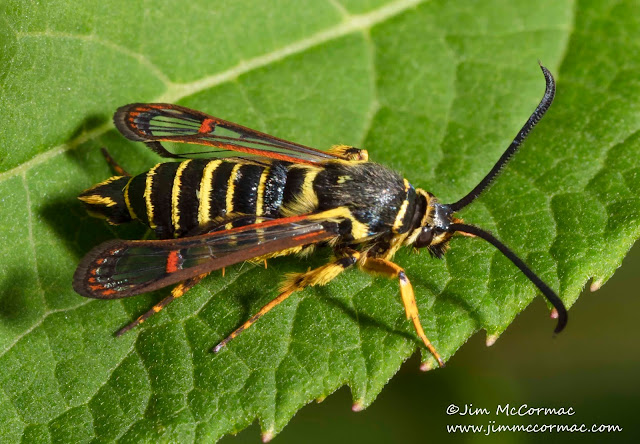 Riley's Clearwing Moth, Synanthedon rileyana, one of the most remarkable hornet mimics around. In particular, it resembles the Eastern Yellowjacket, Vespula maculifrons, and anyone who has been stung by one of these ground-nesting hornets knows what a punch they pack. So, if you are a moth and can successfully evolve the look of one of these stinging insects, a lot of would-be predators will probably leave you alone.
A number of moths - especially the clearwing borers - are superb wasp and hornet mimics. As are myriad flies, beetles, and other insects. This must be a defense primarily against bird predators. Birds seem to learn fast and well the painful lessons learned from trying to eat stinging insects, and avoid them, or insects that look like them, such as this moth.
Being the spitting image of a yellowjacket won't thwart Summer Tanagers though. These beautiful songbirds are major consumers of hornets, bees, wasps and their ilk, and would probably be all over over a Riley's Clearwing Moth if they saw one. But the vast majority of songbirds would likely be repelled, thus gaining this interesting moth a distinct survival advantage.

Wow! This is so cool!!!! You're at Julie Zickafoose's house and you found a moth that hosts on Horse nettle. It doesn't get much better than this. So cool.

Great catch, we have horse nettle in abundance in some places, but I've never found the moth among the plants.