A gorgeous Trumpet Vine Sphinx, Paratraea plebeja, rests atop a flower of its host plant, Trumpet-creeper, Campsis radicans. Occasionally I'll throw up a mercury vapor light and UV (black light) in the backyard to see what comes in. This one did a few nights ago. The plants that nourished its caterpillar were only about ten feet from the lights that attracted the moth, so I moved it over to the host plant for better photo ops.
I've probably spent more time afield nocturnally this summer than diurnally. Most of those efforts have gone towards moths, and increasingly, caterpillars. In general, the latter group gets better as summer turns to fall, and peak caterpillar season around here is from late August into early/mid September. Some recent finds are shared here. 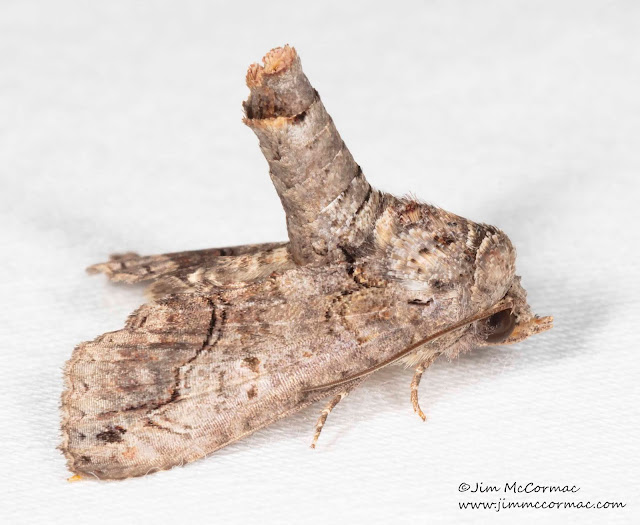 The same night that the Trumpet Vine Sphinx came in, so did this interesting moth, the Large Paectes, Paectes abrostoloides. Check out that amazing abdomen, which it holds upright when at rest. It is a mirror image of a broken off twig, and undoubtedly provides great disruptive camouflage when the moth is at rest on branches during the day. This species is a Sweet Gum specialist. And wouldn't you know, I have a fine specimen of Liquidambar styraciflua at the back of the yard. Plant it and they shall come, as is often said. A point of interest, to me at least, is that I live a good 50 miles north of the native northern limits of Sweet Gum, which is a southern tree. So, to split hairs, it is not native here in Worthington, Ohio. But this showy tree is commonly planted well to the north of its indigenous range and this moth has probably expanded its range as a result. 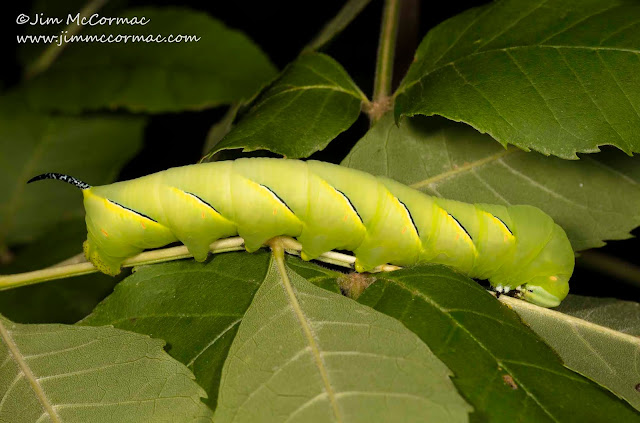 On a recent mothing excursion in Crawford County, Kyle Bailey located this stunning caterpillar, the Fawn Sphinx, Sphinx kalmiae. It's an ash specialist, and that's what this one is feeding on. In my opinion, this is one of the prettiest caterpillars in this neck of the woods. Fawn Sphinx cats almost appear luminescent, as if lit by some inner light, and the oblique slashes and little blue-peppered tail add additional interest. 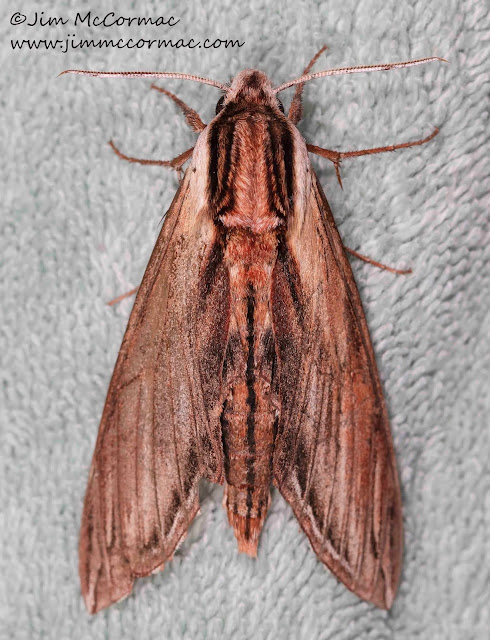 Here is what the caterpillar above becomes, if all goes well. And as is often the case, the moth goes by a different name: Laurel Sphinx. At least some people call it that, although some people call the caterpillar the same, but others call the moth Fawn Sphinx. Insect common names are not standardized by a governing body, as are bird names. But in this case, it can always be called Sphinx kalmiae which is unambiguous.
While the moth looks cool, I would press the case that the caterpillar outshines it. Such reverse ugly duckism is not uncommon in this world. The larvae often look better than the adult moths that they morph into. 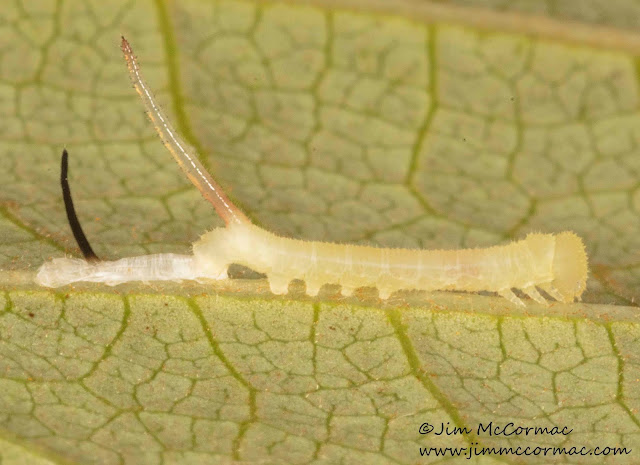 Some of us had an epic mothing night last Friday in a very isolated locale in Pike County. Some interesting caterpillars turned up, including this one. It was spotted by nine year old Quinn Pohlar, who must have bionic vision and certainly abounds with intellectual curiosity. Her father Tim works for the Arc of Appalachia, and the Arc has a conservation easement on the property we were on.
Anyway, this is a truly tiny Pawpaw Sphinx, Dolba hyloeus. It has just completed molting from its first instar (small shed with black horn on left) to its second instar. Even the larger freshly molted version is only about 5mm or so in length. I'm guessing first to second instar based on the still tiny size.
Caterpillars grow through a series of molts, and each stage is termed an instar. A great many of our species go through five instars before growth ends, and the changes from 1st to 5th instars are remarkable. Right after chewing from the egg, the cat is so small you'd likely never see it. By the time it's in its last instar, the caterpillar might be hundreds (thousands?) of times more massive, and look quite different than when its life as a tubular eating machine began. 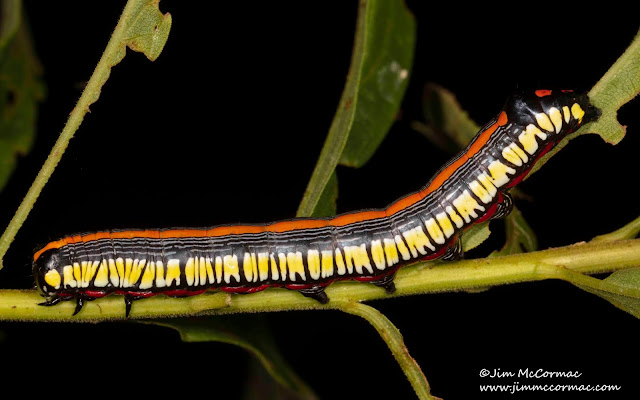 This stunning bag of goo was found the same night as the previous caterpillar. It is a Brown-hooded Owlet Moth caterpillar, Cucullia convexipennis. Cucullia caterpillars are among our showiest lepidopteran larvae. This species stands out even amongst its fellow Cuculloids. It is as if the animal was hand-painted by an artist with eclectic tastes, then glazed to create a glistening sheen.
One might think that such a beauty surely requires some fancy plant as fodder for growth. Not. Brown-hooded Owlet cats specialize on goldenrods, and sometimes asters. This one was eating our most common goldenrod, Tall Goldenrod, Solidago altissima. 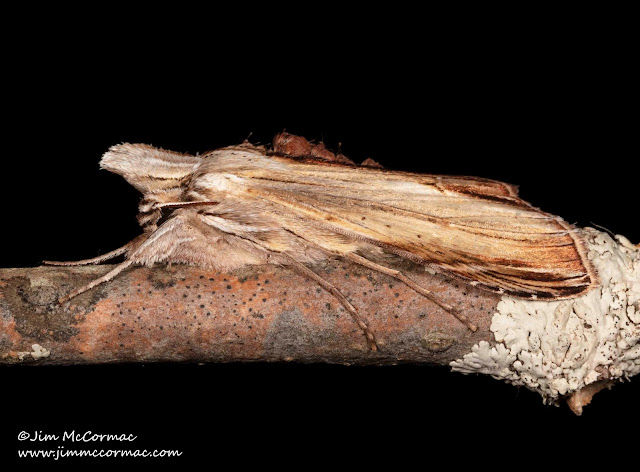 I made this photo a week or so prior at another site. It is the Brown-hooded Owlet Moth, the ultimate phase of the preceding caterpillar. While the moth is nowhere near as showy as its larva, the winged form is still of great interest. It is a fantastic twig or bark mimic, and if ensconced on woody vegetation, your chances of seeing it would be about nil if you didn't know it was there. 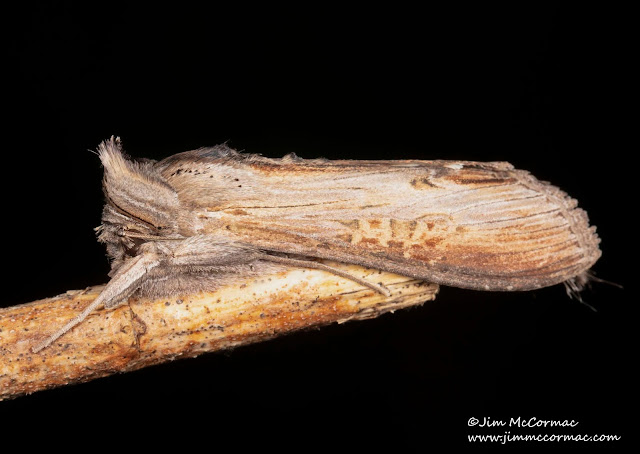 Here is a very similar moth to the preceding one, and a close relative. This one came into our Pike County lights, and I moved it off the stark white sheet and onto a twig. I have noticed that if you can coax one of these bark mimic moths onto your finger, then offer it a natural perch such as this twig, it will usually scuttle quickly onto the perch and nestle right in.
This one is fancifully named The Asteroid, Cucullia asteroides, and as you may have guessed, its caterpillar is quite the beauty. 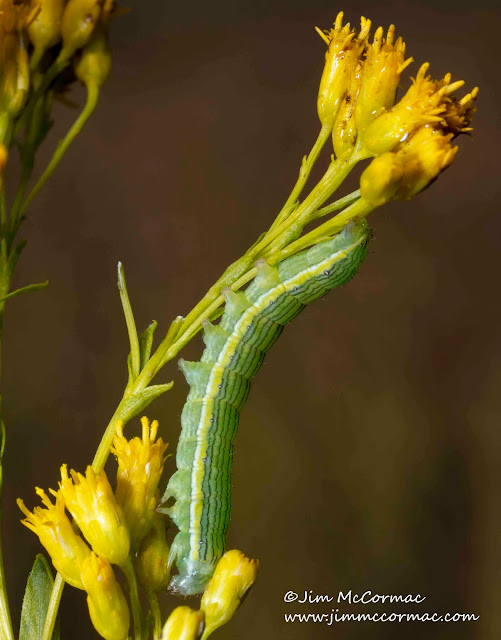 And here it is, the amazing Asteroid caterpillar. Like the Brown-hooded Owlet it is a specialist of asters and goldenrods, although I personally have seen more of these on asters in the genus Symphyotrichum, and Brown-hooded Owlet cats more frequently on goldenrods. But this one has chosen a goldenrod, and a special one at that.
I photographed this Asteroid a few years back in a Ross County (Ohio) fen. It's eating the Buckeye State's namesake - and rare - Ohio Goldenrod, Solidago ohioensis. This caterpillar also reinforces the reverse ugly duckling tale so common to the world of moths and their larvae.
at August 05, 2020