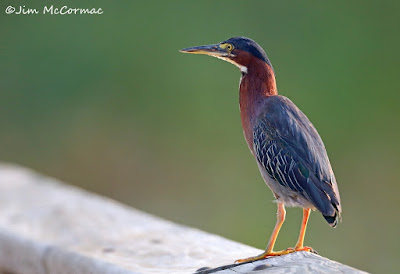 An adult Green Heron stands on a boardwalk railing at a marsh in the Cuyahoga Valley National Park, yesterday. He flew in and landed about 20 feet away from where I was standing.

Maybe it's just good luck, but I seem to have seen many more Green Herons this summer than usual. Just about everywhere I go, there they are. I'm not complaining, these pint-sized waders punch way over their weight in terms of beauty and interest. 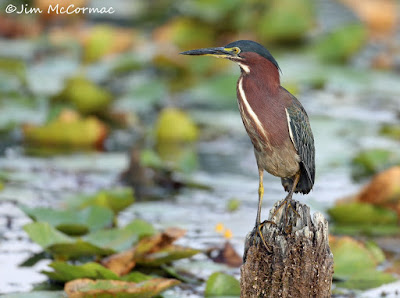 This is the same bird as in the previous photo, but in much better light and far more natural habitat. In the preceding shot, the light was terrible - here, the sunlight is coming over my shoulder during the golden glow of early morning. Thanks to the heron for being so cooperative.

Ever since I was a little kid, I've been captivated by Green Herons, even when they were known by the overly hyphenated name of Green-backed Heron. Not only are they showy, but their behavior is interesting. Like many herons, this species is slow and methodical, patiently stalking small aquatic prey with movements so slow and measured that the animal virtually oozes closer to its victim millimeter by millimeter. 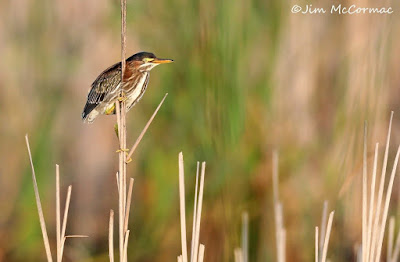 A juvenile Green Heron admires the view from high on a cattail stalk.

Not only are these herons adept hunters, they take hunting to a new level among their ilk. This is one of relatively few birds that is known to employ "lures" for fishing. Sometimes a Green Heron will seize a feather or some other object, and toss it in the water within striking range. If a small fish swims up to investigate, the heron strikes. 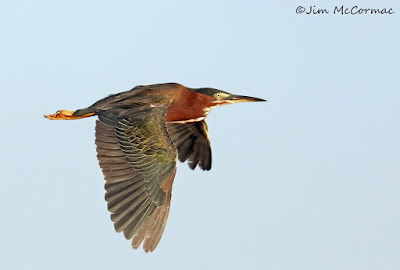 An adult Green Heron wings by my hiding spot in a marsh at Battelle Darby Metropark last Sunday. The molt pattern can be well seen on its wing feathering, with older brownish feathers being replaced by newer greener feathers.

In flight, Green Herons suggest the appearance of a crow, but have a distinctive deep and regular wingbeat that allows them to be identified nearly as far as they can be seen. When flushed, a bird often lets loose with a loud, piercing SKEOW! call that can't be missed. It often expels a prodigious white stream of guano, too - the latter habit leading to one of its many nicknames, "chalk-line". 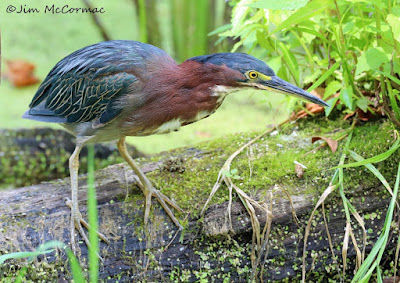 I shot this Green Heron yesterday as it hunted from a log in a swamp. The birds at this site in the Cuyahoga Valley National Park are quite habituated to people and easy to approach. This bird was fixated on a frog, tadpole, or some other small creature and was ever so SLOWLY moving its bill towards the quarry.

PHOTO TIP: For a minute or so, the heron in the shot above froze motionless in this position. I was shooting with a tripod-mounted telephoto lens from only about 25 feet away. When I saw that the bird was remaining stock still, I switched to live view (scene displayed on the viewfinder on the back of the camera). This mode locks the internal mirror up, so when a shot is taken there will be no "mirror slap". Slight as that mirror movement may be, it can cause a bit of shake that might manifest itself at slow shutter speeds. I then flipped the camera's drive mode to 2-second timer delay, in order to eliminate any movement caused by me handling the camera to trip the shutter. Even though the heron's haunts were very dim and shady, this allowed me to stop down to f/8 for better depth of field, and use a relatively slow 1/100 shutter speed while still keeping the ISO to 640. In hindsight, I probably should have slowed the shutter speed even more to bring the ISO down further, but the Canon 5D IV handles higher ISO settings well, and I usually don't worry much until the ISO creeps north of 800. Also, the 5D IV has a touch-activated rear viewing screen, which is worth its weight in gold when making shots like this. All I need do is frame the subject, then touch the part of the screen where I want the camera to focus, then hit the focus button ( back * button on my setup; half-tap of the shutter button for most). This sort of touch-sensitive back screen will become commonplace on digital cameras before long. 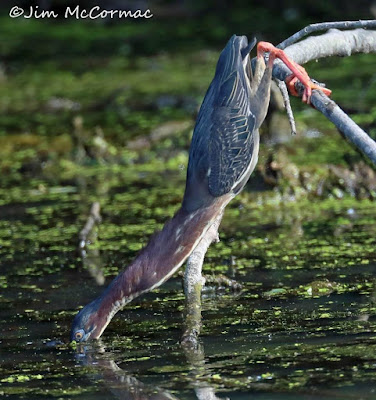 A Green Heron strikes! I made this shot back in July at Lake Logan in Hocking County. It's amazing how far these birds can extend themselves when they lunge. It doesn't seem possible that this bird could pull itself back up after this, but it did, effortlessly.

I feel fortunate to have spent much quality time this year with Green Herons.

Green Herons are one of my favorite herons too. They aren't as often seen as some of the other herons. I have never heard it called chalkline. I will think of this each time I see one now.

Jim, That was a great post and one of the better posts I've read. I enjoyed your writing and the accompanying photos. Your writing is clear and informative (very important, I'm learning). And as a fellow-shutterbug, I enjoyed the photo tip. FYI, I've just begun studying Green Herons in the field, myself. And I agree. They're fascinating birds. Keep up the good work!
Dave Gibson www.birdpartner.com