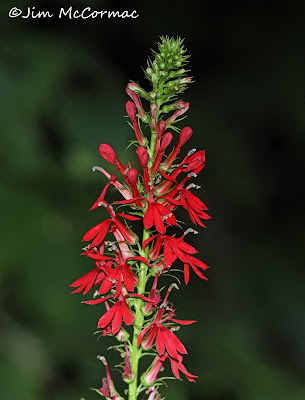 The brilliant red flowers of Cardinal-flower, Lobelia cardinalis, form a conspicuous spike that just can't be missed. This is one of the flashiest plants of late summer and fall. I've seen plants that regularly attain heights of four feet, and the occasional giant that towers to over six feet. Its favored haunts are the rich alluvial soils of floodplain terraces, sometimes in fairly heavy shade but usually doing best where much sunlight reaches the plants for a good chunk of the day. 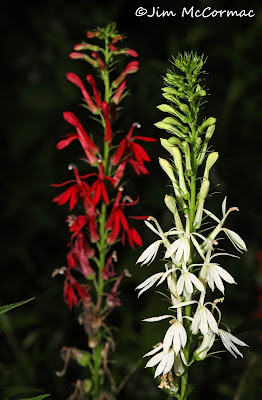 Even more interesting than the typical rich red form of Cardinal-flower is the far scarcer white-flowered type, which has been described as forma alba. I've only seen this variant in nature a handful of times, so when Dave Riepenhoff tipped me to a colony in Scioto County, Ohio, I was pleased indeed, especially as I had a trip planned to that area a few days later.

It wasn't hard to spot the plants. I rounded a slight bend in the road, which followed a small creek, and saw dozens of typical red-flowered plants. Not far behind were a dozen or so magnificent white-form plants, and they fairly glowed in their shady haunts. Above, one of the white plants grows side by side with a typically colored form for ease of comparison. 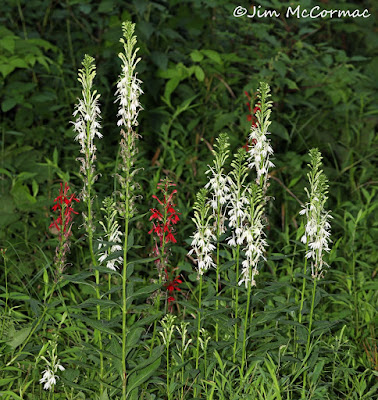 Here's the colony, with the tallest white-flowered plant reaching nearly four feet in height. Quite a striking sight. Stretching for perhaps a few hundred feet down the creek were dozens of other plants, all of those the typical red-flowered form. 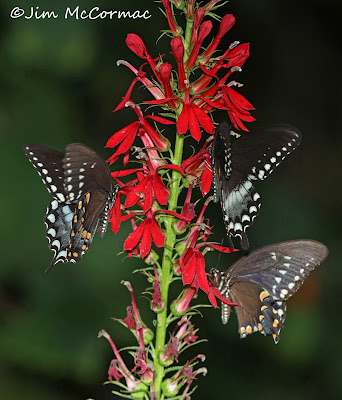 It is often said that Ruby-throated Hummingbirds are the primary pollinators of Cardinal-flower, and some sources even claim it is the only pollinator. The elfin birds do indeed thirst for this species' nectar, and I've seen them visit the flowers many times. Indeed, that's why I arrived at this spot very early in the morning, and set up photographic shop - my aim was to create high-quality images of hummingbirds visiting the flowers, especially those of the rare white form.

Well, there were indeed some hummingbirds about, but they only occasionally visited the Cardinal-flowers and never did come into the white-flowered plants which I set up on. They seemed far more smitten with the numerous Spotted Jewelweed, Impatiens capensis, another wildflower which is coveted by the little birds. In fact, there was a huge patch of the stuff right behind my position, and a male Ruby-throat was guarding it fiercely. He'd drop down and feed at the flowers for a few minutes, then zoom back up to a conspicuous perch overlooking his kingdom, only 15 feet behind my head. Any other hummers that came near were promptly driven away.

As the air warmed, the swallowtails became active and eventually stole the show. At times, fifty or more were mobbing the Cardinal-flowers and three or four often sparred over the same plant, as in the photo above. These big butterflies quickly became my focus. 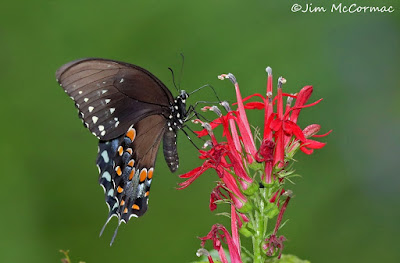 Virtually all of the butterflies were Spicebush Swallowtails, Papilio troilus, as above. I did see one or a few dark morph Eastern Tiger Swallowtails and Pipevine Swallowtails visit the flowers, but the overwhelming majority were the spicebushes. Interesting, even though plenty were about, I never saw a yellow form female Eastern Tiger Swallowtail or any of the always yellow males make an effort to visit the Cardinal-flowers. They stayed strictly with plants in the aster family, most notably Hollow-stemmed Joe-pye, Eutrochium fistulosum.

PHOTOGRAPHIC NOTE: Nearly all of these photos were made with the Canon 5D IV and Canon's superb 500mm f/4 II telephoto lens, mounted on a tripod. Big butterflies such as these really transcend macrophotography, and are easier to shoot from afar with a telephoto. This allows the photographer to remain far enough back to be completely unimportant to the insects, which will operate free of disturbance and as they naturally would. Most any lens of 300mm and up should work very well for swallowtail photography. 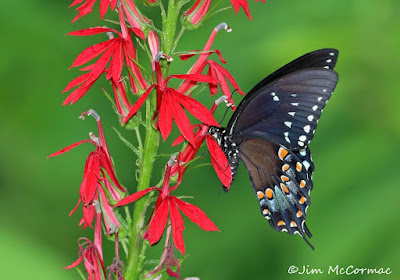 A Spicebush Swallowtail plunges face deep into the sweet spot of a Cardinal-flower. As I was observing and photographing the butterflies, I was thinking about the claims for hummingbird pollination exclusivity. It doesn't make sense that a plant such as this would evolve flowers that are so attractive to butterflies that they would be continually swarmed by the insects, and not derive much if any benefit in return.

Indeed, the flowers appear tailor-made for swallowtail access. The three lower petals hang down, offering a convenient perch for butterflies wishing to plumb the nectaries at the base of the long corolla tube. This arrangement puts the head of the insect in close proximity to the flower's reproductive parts, which are the grayish-white extensions at the top of each flower. When a flower is young, the reproductive extension is a brush or beard-like spur that contains the anthers, which hold the pollen. As the flower matures, the female stigma becomes exserted from the corolla tube - a stigma can be seen protruding from the flower directly opposite the butterfly.

So, the end game for the plant is to have an animal vector move pollen from anthers to stigma. As colonies of Cardinal-flowers, and even individual plants, will have a combination of flowers with exposed stamens/anthers and stigmas at any given time, flower-hugging butterflies would certainly seem capable of accomplishing this task. 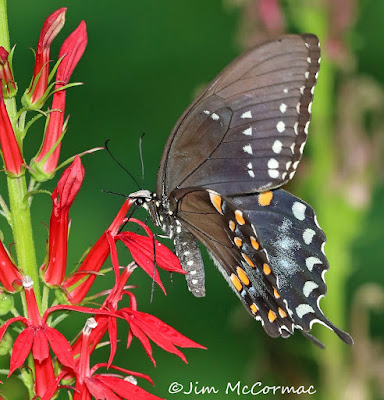 In this shot, we can see a swallowtail's head jammed right into a brush of anthers, and it certainly must be receiving a dusting of pollen for its transgressions. All the butterfly need do is eventually work its way to an older flower with an exposed stigma while some of those pollen grains remain stuck to its head, and Voila! Pollination. 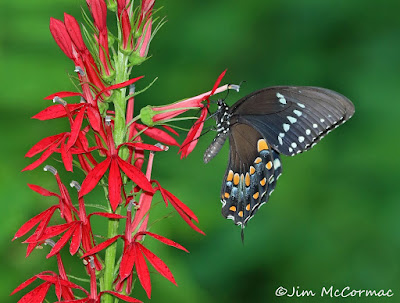 So, while hummingbirds are no doubt important pollinators of Cardinal-flower, I think a strong case can be made that swallowtail butterflies are also important to the gorgeous plant's reproduction. Maybe even more so than the bird.

How a cardinal flower is actually pollinated remains a mystery to me. I sat and photographed the sequence of the extension of the stigma past the beard. It appeared to me that the transfer of the pollen was accomplished as the moist stigma pushed past the beard. My conclusion was that an individual flower was fully capable of self pollination. My pictures included shots of yellow pollen staining the petals below the beard. Since I pictures were taken with a simple point and shoot camera, no birds or butterflies ventured near. The flowers under observation did produce seed. Is there an opening below the beard where the five petals come together? I am unclear just where on the flowers the nectar is gathered. Any insight? Your pictures were great.