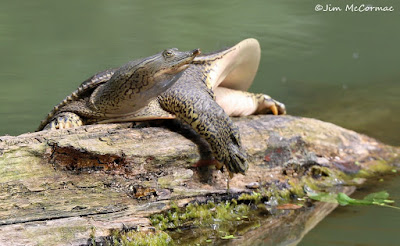 A massive Spiny Softshell Turtle, Apalone spinifera, hauls out on a floating log. Of Ohio's dozen or so turtle species, the softshells are my favorites (there is another species, the rarer and more range-restricted Smooth Softshell, A. mutica).

Yesterday, I was hiking through Eastwood Metropark in Dayton, lugging my tripod-mounted telephoto rig, having just photographed an active Ruby-throated Hummingbird nest deep in the park (thanks for the help, Dean Porter!). As I neared some backwater lagoons, I noticed two large turtles basking on an old log. Knowing something of turtles and their habits, I immediately veered away and began using obstructive brush to mask my movements. By doing so, I was able to get fairly close to the wary reptiles. As good fortune would have it, one of the turtles was the animal above, and the other was a Common Map Turtle, Graptemys geographica. Both of these species are very wary and will escape into the depths at the slightest disturbance.

I worked my way around into good light, and a convenient gap in the brush. In spite of my attempted furtiveness, the turtles were onto me in a flash and I only managed a few images of the softshell before they slid off the log. In spite of retreating to cover and patiently awaiting the turtles' reappearance, they didn't return in the half-hour I hung out. I really wanted map turtle shots, too, but that'll have to come another day.

Softshells are cool on every level. They get huge, and rather than the rock-hard carapace (shell) of their brethren, the carapace of a softshell is like a leathery dinner plate. Its face terminates in an odd beaklike nose, and the feet are large paddlelike appendages. The latter allow them to swim like fish, and a softshell in the water is the epitome of aquatic grace - a reptilian Esther Williams.

My memory bank is chockfull of great softshell memories. As a kid growing up in Worthington, Ohio, a stone's throw from the banks of the Olentangy River, one of my favorite pursuits was finding these turtles. Me and my little buddies often would locate them, and occasionally we'd capture one. We quickly learned that they burrow exceptionally well. One day we grabbed a small softshell, created a rocky enclosure in shallow water, and temporarily imprisoned the turtle in it. Upon returning some time later, we were surprised to see that our turtle had apparently escaped. One of us had the sense to root around in the muck of the enclosure, and there was our turtle, buried in the mud.

Another time, I was walking across a large bridge over the river, and looked down to see a pair of softshells swimming about in the clear water. Their movements were so fluid and graceful that they put the fish to shame.

Softshells possess a rather hostile temperament, and the large ones can be intimidating. They'll not hesitate to bite, but have little fear. Their mandibles are soft and leathery and can't do much of any harm. I learned this in a rather shocking way. I'd always been careful to steer clear of their jaws when handling them - who wouldn't! - but one day I was showing a friend a large one I'd caught. He exclaimed something like "Ooh! Softshell!! - and immediately stuck his hand in its face. The turtle snapped, it didn't faze my buddy, and its bluff called, the softshell made no more attempts to bite. 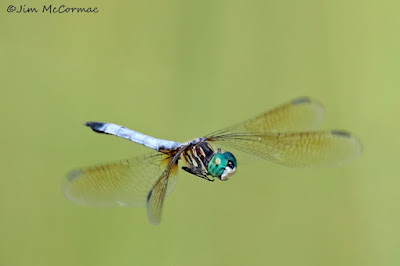 I spent an excellent morning recently at the sprawling Battelle Darby Metropark in southwest Franklin County, site of one of Ohio's greatest prairie restorations. The massive grasslands and wetlands have spawned the return of many notable bird species, and I obtained excellent images of Henslow's Sparrows, and Marsh and Sedge Wrens.

The rig of choice this day was the Canon 5D IV and 800mm f/5.6 lens, tripod-mounted of course. As I neared the parking area, having trekked about two miles around the prairie, I noticed a male Blue Dasher dragonfly, Pachydiplax longipennis, hunting from a prominent perch. Many of the skimmer dragonflies hunt like flycatchers, sallying out from a perch and returning to it after bagging aerial prey. These yo-yo flights are predictable, and I used this to my advantage to make the above photo. The camera rig I described above would probably not normally be thought of as a first choice for dragonfly photography, but as we can see it can work well. The camera settings were (in manual mode): f/5.6, ISO 640, 1/2000, +0.7 exposure compensation, and no flash.

I read with interest your article in this morning's Dispatch about the vanishing prairie. I thought you would enjoy this post from my blog, and the poem I wrote about the prairie.
http://365thingsthatinspireme.blogspot.com/2010/09/sept-13-2010.html