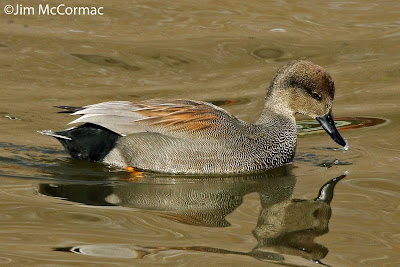 Of all our dabbling ducks, I would venture that the Gadwall may be the most overlooked. To ignore such a subtly beautiful animal would be an aesthetic crime on the part of the observer. The Gadwall in this photo is a drake, and it is finely etched with artistic vermiculations that create delicate op-art on its breast, flanks, and back. A beautiful tawny-brown head punctuates golden-tan highlights on the back, and the duck is capped rearward with an ebony rump.

I made this image last Saturday from an elevated viewing platform at the tailwaters of Hoover Dam in Westerville, Ohio. I normally don't much like shooting from that spot, because it forces one to shoot down on the birds at a fairly steep angle. This often means that there isn't enough contrast between ducks and water, and the ducks get lost among the reflections.

However, every now and then the water color and reflections complement the duck, and I think that's what happened with this image. As the air temperature was maybe 9 F at the time the photo was taken, the water was actively icing up in places, and that may have contributed in some way to its creamy texture. The image was made with the Canon 7D Mark II and 500mm f/4 II, with the 1.4x teleconverter. Shutter priority mode, f/5.6, 1/2000, ISO 400, using center point focus with four surrounding points active.

Good Shot Jim. I love this duck one of my favorites. Female ducks are often overlooked also, because one must look carefully at there demure coloring. Gary Wayne