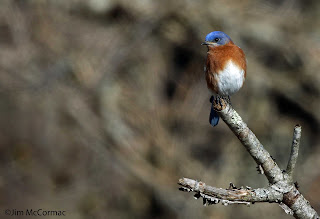 A stunning male Eastern Bluebird hunts insects from a conspicuous perch. While these seemingly gentle creatures are thrushes - a group known for shrinking violets in this part of the world - I think of bluebirds as "hawk-thrushes".

I found myself roaming parts of south-central Ohio last Saturday, on an unseasonably balmy day. Temps hit near 50 F, and that got some insects stirring. One of the places that I visited was Stage's Pond State Nature Preserve just north of Circleville. Recent habitat management there left a savanna-like situation, with a recently mowed meadow interspersed with scattered small trees. Perfect bluebird habitat, and sure enough there was a small flock hunting the site. 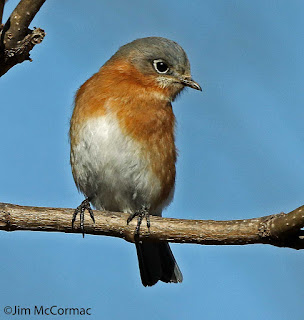 I'm certainly not the only one smitten by bluebirds. This species - all three species, actually - have a virtual cult following. Much of their fan club is driven by "bluebirders" who collectively erect scads of free housing for these cavity-nesters. I'm not among their ranks - I've just always liked these beautiful songbirds for their good looks, pleasing warbles, and interesting behavior.

So, when I noticed the pack of bluebirds waging battle against the insects in the grass below, I semi-concealed myself, remained as still as possible, and watched/photographed the animals for an hour or so.

The female in the photo above is watching the ground with keen eyes. Moments after I made the photo, she flutter-dropped to the ground and seized something. Maybe one of the sluggish but still active grasshoppers, I'm not sure. In any event, this is classic Eastern Bluebird hunting modus operandi. Sit on an often-exposed perch over good foraging habitat, watch for prey, and fly down and seize the victim. Much like a Red-tailed Hawk or many other raptors do. The scale of the prey is just smaller. 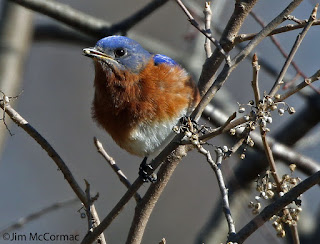 As I was working my way back to the parking lot, I spotted this male bluebird as it darted into an unkempt patch of vines adorning a small tree. Yes! - he was going to harvest the fruit of one of my favorite plants, and also give me an opportunity to photo-document yet another species feeding on the berries of poison ivy, Toxicodendron radicans.

Poison ivy is one of the most disparaged of our plant species, and I suspect most Homo sapiens who revile it don't know that it is native (or care). But poison ivy has been a part of North America's landscape for far longer than we've been around, and many animals have developed a relationship with the plant. Including bluebirds.

The berries of this dermatitis-inducing plant are apparently mighty tasty to the feathered crowd, and probably loaded with nutritional value, too. While this is the first time I've managed to photograph a bluebird in the act of eating ivy berries, it's not the first time I've seen such behavior. I've also watched American Robins, and Hermit and Swainson's thrushes eat the stuff. Yellow-rumped Warblers are addicted to the poison ivy fruit. It's amusing to watch gargantuan Pileated Woodpeckers dangle from the flimsy, swaying vines as they attempt to pluck the small berries. And many other birds take advantage of the fruit of this oft-reviled plant.

Should you be interested, CLICK HERE for "A Brief Essay in Defense of Poison Ivy" that I wrote almost exactly two years ago.