A few birds of late

Last Saturday, I got up really early, and was down in deep southern Ohio not long after sunrise. This was a bird mission, primarily, and my target was a large wild area in Adams County that I had not visited in a few decades. Time has not been kind to this place, and an infestation of nonnative honeysuckle shrubs and various other factors have caused a sharp reduction in plant diversity, and as a consequence, overall biodiversity.

I had to kick around quite a bit before finding a honey-hole. But finally, while cruising a gravel lane, I spotted a clearing surrounded by various native shrubs, saplings, with a backdrop of more mature forest. Best of all, there was a robust thicket of fruiting staghorn sumac, Rhus typhina. I knew this spot would produce some action, so I parked, hauled my rig in, and pushed up against some small trees. 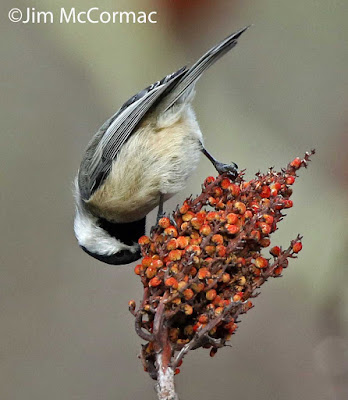 I spent the next two hours near the sumac, being treated to a regular procession of birds. Lots of species love to snack on the fruit of sumac, including this Carolina Chickadee. The chickadee was loosely accompanied by many other species. 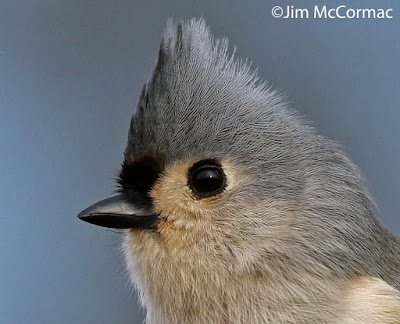 At one point, this inquisitive Tufted Titmouse came near, no doubt wondering who the odd-looking invader was. He gave a few husky grumbles, but mostly whistled loud clear Peter-Peter-Peters! The timouse's talking brought a number of other birds around to see what was going on. Through it all, I stayed still, camera at the ready. Small songbirds have short attention spans, and before long they would proceed with business as usual, allowing me to try to make shots of birds behaving naturally.

I had my Canon 7D Mark II on the tripod, connected to the 500 f/4 II lens with a 1.4x teleconverter sandwiched in between. Given the camera's crop factor, that makes the setup the equivalent of an 1120mm lens. With no cropping at all, the titmouse nearly filled the frame. When I reviewed the file later, I saw that the photo was pretty much razor sharp, so I cropped it down to highlight the bird's face and attendant plumage details. These are truly handsome little animals. 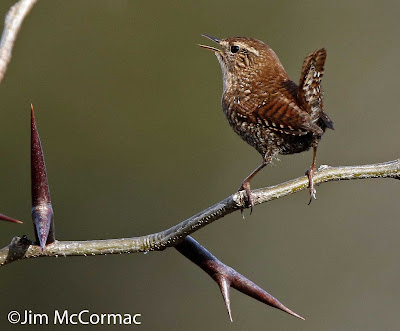 Another species that was apparently lured by the titmouse's fussing was this Winter Wren. While there was a lot of simultaneous action, I kept one eye on the wren to see if any opportunities would arise. This is a hard species to image well, due to their habitat of skulking in dense cover.

Finally, the unseasonably springlike day caused the wren to burst into song, and to my great pleasure, it jumped into the lower boughs of a honey locust to deliver its long gushing aria. Yes! By quietly moving a few feet, I got a narrow but clear opening, and was able to click off the best images that I have ever managed of this species. The honey locust thorns were a real bonus. 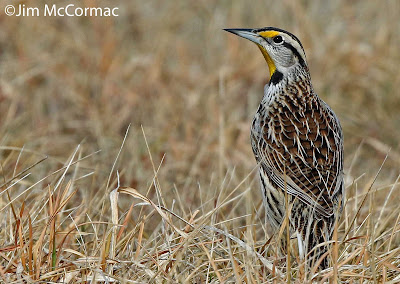 On my way out, I drove by a small meadow that was greatly enlivened by the flutelike whistlings of an Eastern Meadowlark. Spotting a discreet hiding spot, I parked and lugged the tripod and camera into some shrubbery. Within a half-hour I had managed a number of decent images. So full of the promise of spring was this meadowlark that he even sang as he waddled through the grasses seeking food, often closely approaching my position. While everyone oohs and aahs over this species' spectacular lemony breast marked with a coal-black chevron, note the incredibly ornate detailing of its back. I prefer this image to the full frontal shots that I made. 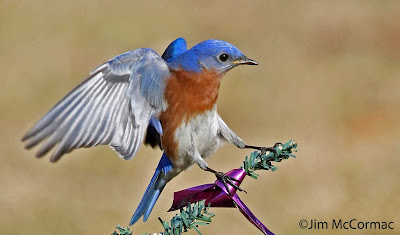 Various stuff precluded a full field day the following day, so I ran down to the local Green Lawn Cemetery for a bit. A recently felled tree and attendant ground-up stump must have harbored beetle grubs or other insects, and a tribe of Eastern Bluebirds were feeding there. Two nearby tiny fake conifers were regularly being used as perches by the birds, so it was a simple matter of positioning the rig where the light was optimal. I do regret not pulling that garish ribbon off the fake tree. But I worried that encroaching on the spot might spook the birds, and it wasn't my place to remove someone else's decoration. I suppose I can do that with Photoshop if need be.

When a bird habitually returns to the same perch, it is a photographer's dream. I just locked my focus on the tip of the tree, and didn't even look through the viewfinder. When I saw one of the bluebirds flying towards the perch, I'd just trip the shutter as it drew near, and the Canon's 10 frames a second burst mode produced some nice results.

I still wish I had pulled that stupid purple ribbon off, though.

Nice shots, Jim. Were you at Tranquility?

As I looked at the Eastern Bluebird photo, I did not notice the purple ribbon. Well, not until I read your words. :-) Your blog gives me great joy. Thank you so much.

Looks like you had a great couple of days! Thanks for sharing your beautiful images!