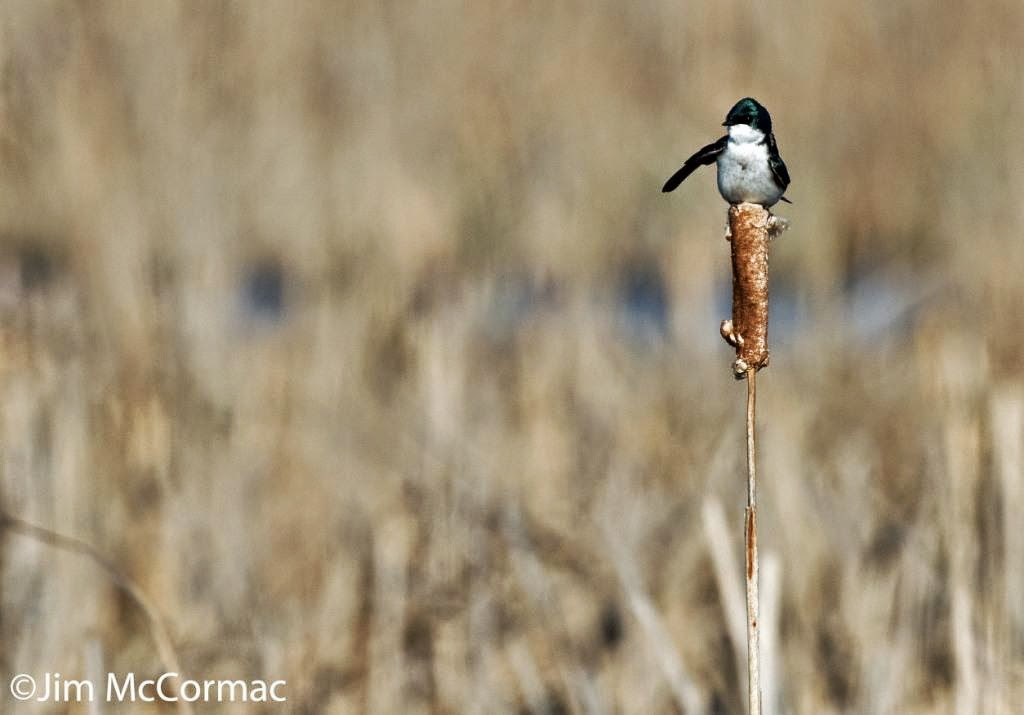 There are many avian harbingers of spring, but my favorite is the plucky Tree Swallow. Their return to northern marshes is a sure sign that winter's grip is weakening. In Ohio, the first scout swallows might appear by late-February. They are sure to be greeted by by crusts of ice, and the certain prospect of enduring several more freezes and nasty bouts of weather courtesy of an Old Man Winter who doesn't want to let go. 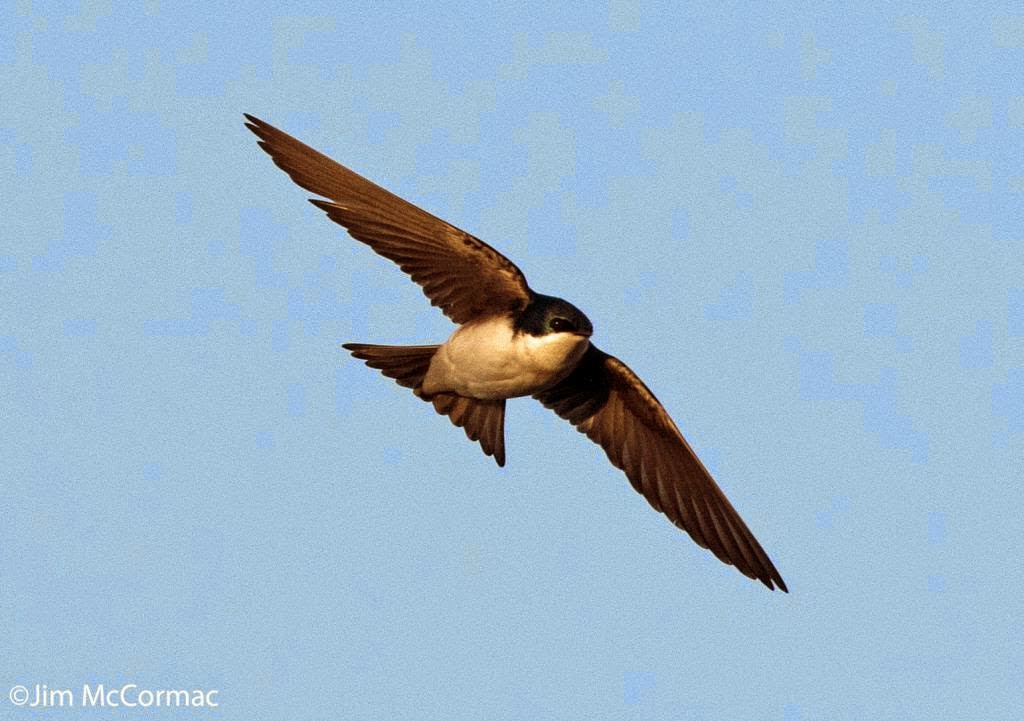 As the days lengthen and temperatures become decidedly milder, more swallows sweep north in their great seasonal occupation of marshes in the northern U.S. and Canada. Tree Swallows, like the rest of their kin, are primarily insectivores. Wetlands produce great crops of flying insects, and the swallows rush in to capitalize on this bounty, and perform their role in the food web. 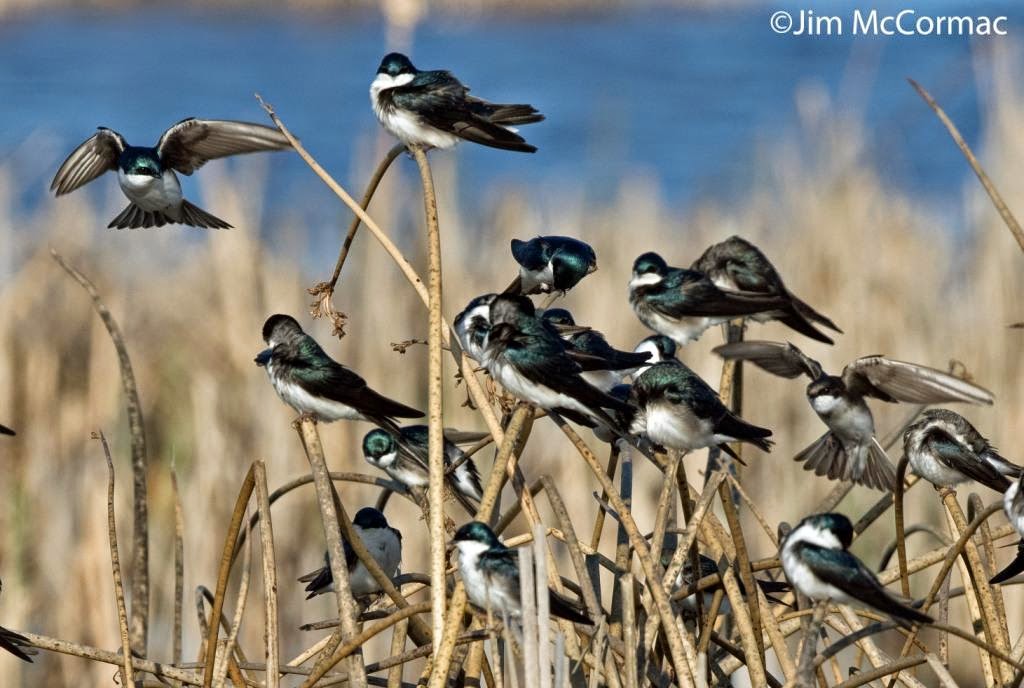 A flock of Tree Swallows finds the old culms of hardstem bulrush, Schoenoplectus acutus, to be suitable perches. This group was a tiny fraction of huge numbers of Tree Swallows that were present in the prairie marshes at Battelle Darby Metro Park in southwest Franklin County last Friday. Mixed among their ranks were a few Barn Swallows and Northern Rough-winged Swallows, but it was the early bird Tree Swallows that totally dominated.

I had an all day retreat for a board that I serve on at a nearby lodge within the park. So, I packed all my camera gear and when that was over, waded out into the marsh to see what I could see. Lots of birds were present - blackbirds galore, many species of ducks, a lone American Bittern flew over - but the feisty swallows ended up occupying much of my attention and shutter clicks. 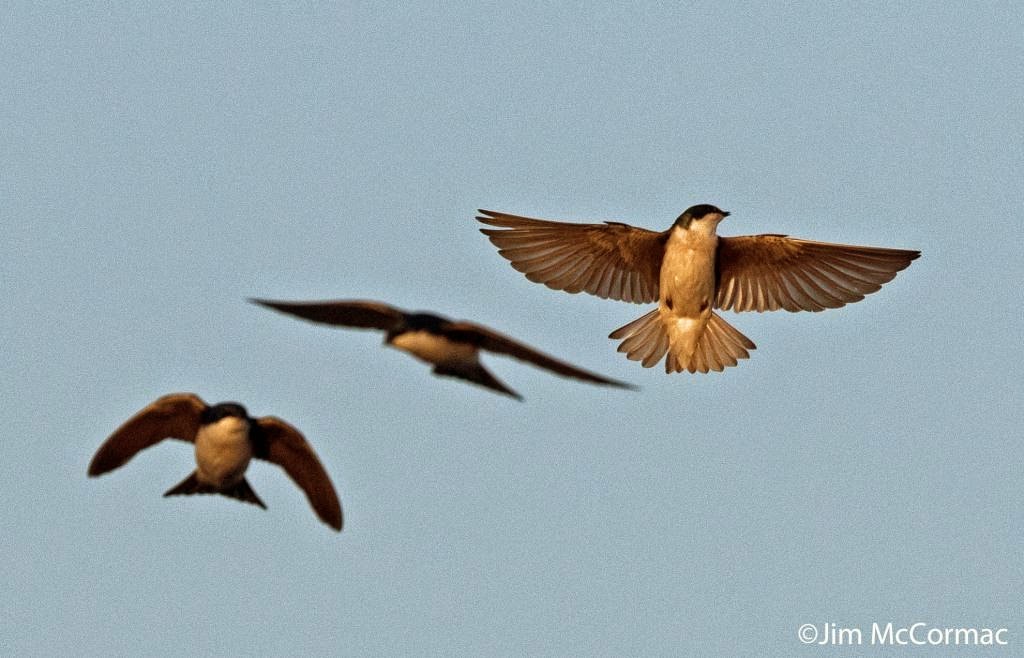 Shooting flying swallows is not easy - give it a try sometime. Most of my efforts went into the digital trash can, but a few were keepers. This image was made at a shutter speed of 1/3200, which is what it takes to freeze the speedy aerialists. While the golden light of late day was coming over my shoulder, which is good, it was near dusk. That meant an ISO of 500 had to be used, which even with the new cameras such as my Canon 7D Mark II is not ideal, as the higher the ISO the more the "grain", or digital noise. The birds really did align themselves this way, though.

Anyway, to the post's title. The Tree Swallow has long been one of my favorite birds. They seem rich in personality, their flying skills are nearly unrivaled, and they're meat eaters mostly (crunchy insects, but eh? - it's still meat). 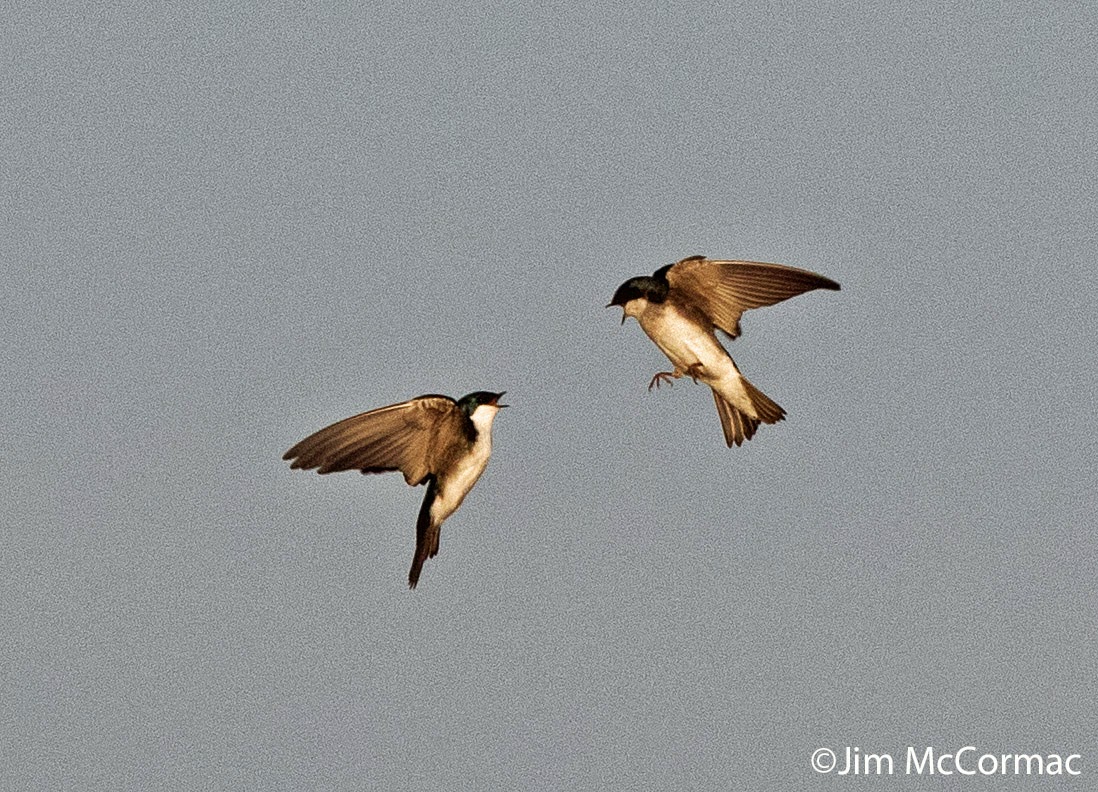 Most of us into birds have asked ourselves at some point: If I could be a bird, what would I choose?

Were such an opportunity to come my way, it might well be the Tree Swallow. For me, everything about them conjures good memories. They symbolize winter's end. Tree Swallows make wonderful liquid gurgling sounds, far eclipsing the noises made by many people that I've heard. Their aerial antics are endlessly amusing. The swallows have opted to become our companions of sorts, by utilizing scores of nest boxes that people erect for them (even if the erectors think the boxes are for bluebirds). They are also seemingly without fear, and intelligently opportunistic. I remember standing with a group of birders in a marshside grassy area on a cool day, and we must have been flushing mayflies from the grass. Bold Tree Swallows rocketed through our group at knee height and within inches, as if we were pylons for their flying circus.

When I am gone, I would consider it a great honor if some of my carbon is recycled into a Tree Swallow.

Hi Jim - your blog was recommended to me by my friend Ward Lutz. I wonder if some of the tree swallows you were observing had recently been observed by me down in Belize? I have seen thousands of them out over the swamp and creek behind our place down here. They are great birds, endlessly entertaining to watch individually and en masse. You got some great shots of them. They move so fast, even when "coasting". I am still working on getting them, but it will have to wait until they return in the autumn. Cheers, Wilma

Thanks for reading my blog! Some of "our" Tree Swallows may have been "yours" in Belize. At least some of our swallows undoubtedly make it at least that far south, and probably considerably further south. Don't worry, we'll be sending them back in about six months or so :-)

You're right that they are seemingly without fear. On several occasions, I've been walking at Dawes Arboretum when tree swallows were nesting in bluebird boxes, and if the trail went too close to the box, a swallow has dive-bombed me, flying close enough to ruffle my hair. One time when this happened, I stood somewhat nestled back into (and protected by the branches of) a nearby crabapple tree, and the swallow, extremely frustrated not to be able to reach me, kept flying as close as possible to the tree while uttering what must have been a string of swallow expletives!

I've enjoyed the company of a pair in the bluebird box at my vegetable garden for the past 3 years.
I so enjoy watching them...and they are quite patient with me when I NEED to be right next to the post weeding. I'm expecting them to show up any day now.