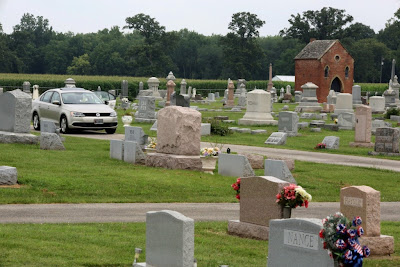 Your narrator's car, in a Madison County cemetery. My travels of last weekend put me within minutes of a fairly expansive graveyard, that's smack in the middle of one of Ohio's former prairie regions. The prairie is largely no more, having been converted to beans, corn, and wheat, but some of the prairie denizens continue on, including an interesting little mammal. 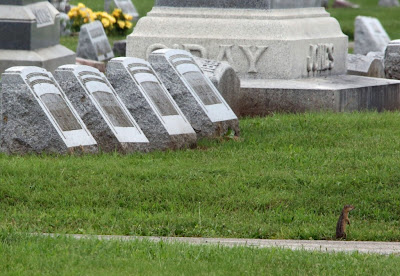 A Thirteen-lined Ground Squirrel, Spermophilus tridecemlineatus, stands sentry duty. Distant as I was, the animal was on to me and ready to whistle a warning to his mates if need be. I've written about ground squirrels before, and I probably will again. I've invested many an hour watching them, and trying to make images, and consider it time well spent.

13-liners love short grassy areas, and adopt cemeteries readily. As the animals are colonial and dig extensive underground labyrinths, their presence doesn't always sit well with cemetery managers and they sometimes are eradicated. I hope that doesn't happen here. 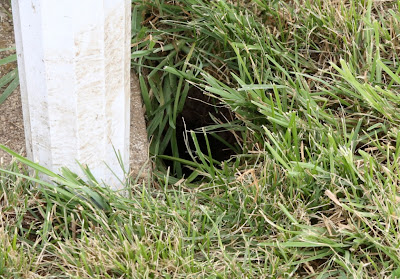 It didn't take long to find a burrow. A convenient bench was not far off, and I crouched behind that to await the surfacing of the squirrel that I had seen ducking into this hole. Thirteen-lined Ground Squirrels are true hibernators, even more so than Woodchucks. Probably the only other mammals that rival their Van Winkleian slumbers are the meadow jumping mice. The squirrels pack up and go subterranean in September or October, and don't poke above ground until late April or thereabouts. 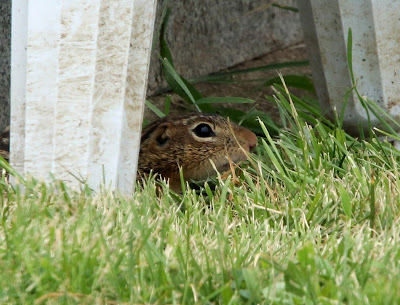 A few minutes of patience, and the little prairie dog popped out to see what the big bipedal dope was doing. I didn't move a muscle, other than to ever slowly hoist the camera into position, and was able to click off some shots without causing undue concern. 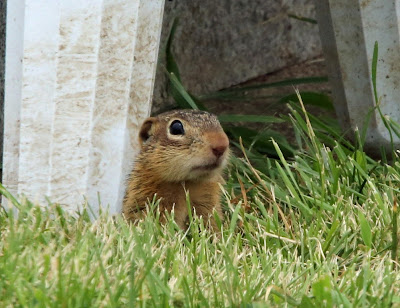 These are not bold animals, and are normally quite suspicious of interlopers. Not surprising, since the squirrels are sausages on legs and many a predator would relish one as a meal. However, in areas of high people traffic, the ground squirrels have adapted to humans and can be surprisingly tame, such as can be seen HERE. 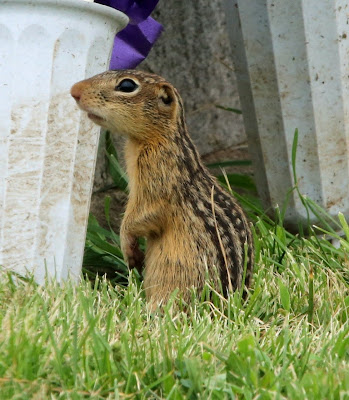 When on alert, ground squirrels often stand erect, the better to spot threats. The anvil-headed almond-eyed critters are quite good looking, if you ask my opinion, and their behavior and habits make them all the more intriguing. 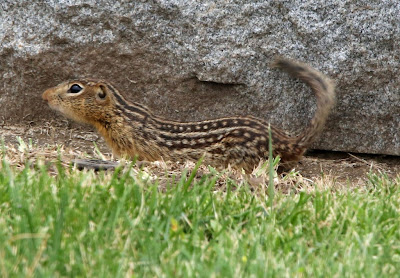 Finally, after about ten minutes, the squirrel began to move away from the safety of its burrow, revealing its handsome pattern of dashes and dots.

Thirteen-lined Ground Squirrels are no dummies. They thrive in the warmth of spring, summer, and fall. If things get too hot above ground, a cool subterranean retreat is never more than a few paces away. Come the cold, ice, and snow of winter, the squirrels go underground and sleep right through the whole mess. Not a bad gig!
at July 26, 2013

I love these guys - last spring they absolutely delighted me when they came out of hibernation and started hanging around the birdfeeders at the place in Wisconsin where I was working. I was pretty disappointed to realize that the locals all considered them pests.

Just the other day I realized that I hadn't seen any since moving here 6 years ago, although I used to see them quite regularly when we lived about 100 miles north of here. According to the "...in Kansas" books, they are supposed to be here in this county, so maybe just not in my area. I'd love to have a nice young couple move in.