A trio of moths, all in black

Even plants that get a bad rap as "weeds" can be mighty beneficial. In fact, one could argue that many of these so-called weeds, as long as they're native, support greater animal populations than do most of their rarer and sexier botanical kin. The plant above doesn't have much of a fan club, and is sometimes derided as a weed. It is common dogbane, or Indian-hemp, Apocynum cannabinum, an abundant and widespread species that occurs in every Ohio county, all lower 48 states, and most Canadian provinces. The plants in the photo are bursting through asphalt, a feat I see dogbane accomplishing with regularity. It's tough as nails. 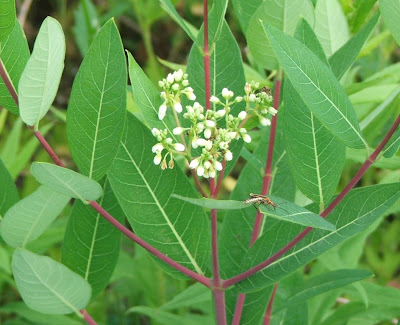 Dogbane always bears watching. The small white flowers grow in dense clusters, and they are insect magnets. It seems like dogbane flowers are never without a complement of pollinators, and that often includes some interesting bugs. A soldier beetle, Chauliognathus marginatus, rests on a leaf of this plant; it had probably just worked over the flowers, or is about to.


Dogbanes, while in their own family, the Apocynaceae, butt right up against the milkweeds on the family tree, and one can see the similarities in leaf structure. Rupture a leaf, and you'll stimulate the flow of thick milky latex, just as in milkweeds.

On a recent brief foray, I found myself in a small prairie remnant that was liberally peppered with dogbane plants. With my Nikon D7000 slung over my shoulder, I moved in to inspect the "weeds" and was quickly rewarded.

This strange-looking wasplike thing is actually a moth, and it probably hopes that you and everyone else thinks it really is a nasty stinging wasp. Mimicry of a six-legged bad boy that might pack a punishing sting is a good ploy if you are a moth that boldly flies during daylight hours, as this one does. It is a grapeleaf skeletonizer, Harrisina americana, a fairly common species whose caterpillars feed on various grapes, and Virginia creeper.

A dead giveaway that this grapeleaf skeletonizer is actually a moth are those pectinate (comblike) antennae. Other than that, the animal does a darn good job of acting the part of a wasp. In life, it lacks the forceful movements and loud buzzing flight of most wasps, though. Note the orangish-red neck collar - that's a useful feature to use to separate this species from a couple of similar day-flying moths.

This is another mostly black day-active moth, the yellow-collared scape moth, Cisseps fulvicollis. It's similar to the skeletonizer, but has a yellowish-orange collar. Scape moths look less flimsy and more beetlelike, too - they may be mimics of fireflies, which are distasteful and shunned by many predators.

The third species in this dark moth trio is the Virginia ctenucha, Ctenucha virginica (ten-oo-ka). It is probably another beetle mimic, and is most similar to the yellow-collared scape moth. Note the metallic blue upper body patch, though - a diagnostic field mark. This specimen is also enjoying the sweet nectar of dogbane.

All three of these interesting day-flying moths are on the wing now. Investigate some dogbane patches, and you'll probably find at least one of them sooner than later.

Thank you for this interesting look into the mimics, and putting forth such a good word for host plants. We try to leave mallows in the ground in the hope that our tiny blue butterflies will actually find it and lay eggs on it.

I saw that first moth on spreading dogbane the other day. Wondered what it was!

Its great and I love this blog i never visited before like this, I was research on black cohosh just. But This post is attractive and presentation of this post is wonderful. Thanks for sharing