Eastern Kingbirds have long been a favorite bird of mine. In fact, just a few days ago I was asked "ten questions" for an interview (you can read it HERE) and one of them was the obligatory "what's your favorite bird" line of inquiry. Since I don't have one favorite bird, I rattled off a half-dozen or so notables, and the kingbird was one of them.

So when I ran across the following photos yesterday, I just had to try and get permission to share them. The photographer, Allan Claybon, kindly consented. I've seen Allan's work here and there for quite some while, and his skills with a camera rise far above the norm. Check out his stuff HERE, and prepare to be dazzled. 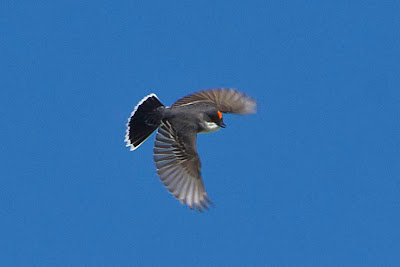 Eastern Kingbirds ooze personality. These feathered tough guys brook no invasion of their personal space by birds for which they have no tolerance, and that includes species many times their size such as crows, hawks, and eagles. If one of these comparative jumbos dares to violate the airspace over a kingbird's nesting territory, it is going to learn of its mistake right quick.

Like a feathered SAM (surface to air missile), one of the kingbird pair will quickly scramble skyward when an offending party lumbers into restricted airspace. The ensuing dogfight is a sight to behold. It's really not much of a dogfight, actually - the much clumsier and less agile hawk, heron, vulture or whatever the case may be starts madly rowing its wings to escape the kingbird's wrath. Reminiscent of a P-51 Mustang fighter plane, the kingbird rapidly gains altitude and gets above the interloper. It then dive bombs its target, brutally strafing the topside of the now panicked enemy. I have actually seen a kingbird land on the back of a Red-tailed Hawk and hammer away at it, while the poor raptor tries to shake its tormentor away.

Back to Allan's amazing photo, above. What a shot! The white-tipped tail, looking as if it was dunked in white paint, is on clear display. But best of all, we can see the scarlet crown patch - definitely not something one often can observe. Kingbirds normally conceal this war paint amongst the other crown feathers. But when battle time rolls around and enemy engagement is called for, the bird flares that feathered warning flag in can't miss fashion.

Here's what the protective parents are safe-guarding. A newly hatched kingbird can rest safe knowing that its parents are among the most savage of songbirds, and they're looking out for baby. I made this photo several years ago in Ashland County, and the nest was only about five feet off the ground in an autumn-olive shrub. I've also found kingbird nests as high as 50 feet up in a sycamore tree. It seems that they are rather general in their nest placement parameters, but one thing doesn't change - the kingbirds will protect that nest against all invaders, at least of the feathered kind. 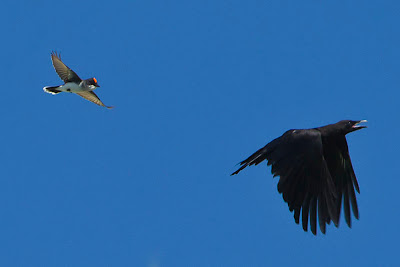 Warpaint flared, and kingbird hot on the heels of a hapless American Crow. It almost seems as if the crow is saying "Oh My God", and you can be sure it is hotfooting it the heck out of that kingbird's turf. Smart cookies that they are, it's likely that this crow will remember this bully, and not trespass here again.

There's much more to these interesting flycatchers, but that'd require another post. But Allan's stunning images certainly bring out one of their most interesting character traits. Perhaps you see why Eastern Kingbirds rank high among my favorite birds.

Thanks again to Allan for graciously sharing his work with us.

Every time I see Allan out in the field he is capturing great photos! These are spectacular. The Eastern Kingbird is special in my heart because it was the very first bird I ever ID'd on my own with a field guide. :)

I'm not a big kingbird fan, but I'll reconsider! Not sure if you do silly stuff like this, but I just gave you an award at myqualityday.blogspot.com

Great post. I love seeing their "warpaint" flair. The kingbird is a VERY handsome bird. Thanks!

My son has become a huge Eastern Kingbird fan. He has on his 'bucket list' for this summer to see one. Do you know of any bird sanctuaries or zoos that have them? We live in West Michigan, but are willing to drive a little to see one. Thanks!