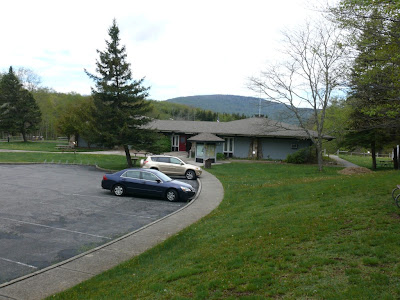 The Cranberry Mountain Nature Center, high in the Monongahela National Forest. A fabulous place, in a magical setting. Note the large red spruce, Picea rubens, growing to the left of the building, as they are important to this story.

Last Thursday, I was co-leading an expedition to nearby Cranberry Glades Botanical Area as part of the New River Birding & Nature Festival. We were strolling the road, when I heard the sharp kip-kip-kips of a Red Crossbill, Loxia curvirostra, flying over. These odd boreal finches are probably the most coveted of the bird species that might be encountered on this trip, and most years we fail to find them. While nearly all of the group heard the bird, and some saw the distant speck as it hurtled overhead, this was not a very satisfying immersion into the world of crossbills, and this would be a life bird for most in our party. 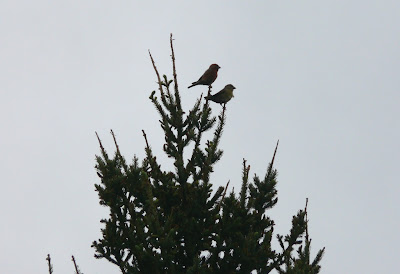 Around noon, we repaired to the aforementioned nature center to eat, and as it was a nice day we sat outside at picnic tables. As usual, I had one ear cocked outward, listening for whatever might happen by. Before long, I thought I heard the distant chatter of a crossbill, and quietly stepped away for a quick scan. And there it was - teed up on a spruce across the road! I let loose with a quiet shout, the group sprang to life, and we had it in the scopes in a wink. Everyone got the bird before a noisy logging truck steamed past, spooking the x-bill, which was not to be seen again that day.

I then went into the center to query the staff about these birds, knowing from past visits that they were familiar with the species. "Oh yes, they've been around all winter and we've got up to 30 coming in each morning" came the report! Turns out the nature center staff discovered by accident that crossbills enjoy snacking on salt, and they were casting the stuff right outside the garage doors.

Well. With this intelligence in the bag, we modified the next day's visit to Cranberry Glades and went straight to the nature center, leaving the glades for later. Sure enough, no sooner than we exited the bus, the distinctive notes of crossbills greeted us. Our gang of 20 stealthily sneaked up and set up shop about 50 feet from the salting station, and were rewarded with stunning views of these handsome birds. 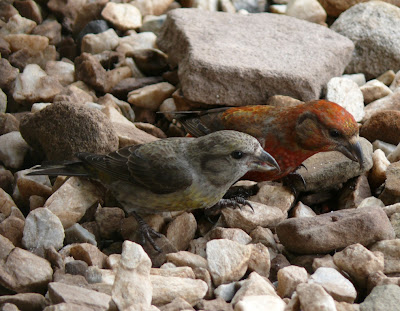 Nature Center staff reported that the crossbills wouldn't even fly when they opened the outside door and stood four feet away. Turns out the birds had learned to recognize them, and were comfortable with their presence. They said that I could snap some photos from the doorway, and after everyone had been satiated with good looks, I gave it a whirl. The birds DID NOT recognize your narrator, and flushed. But they were soon back.

When we returned to the center for lunch, the crossbills were still hanging out, and once again I tried shooting from the door. This time, the birds did ignore me, and I was able to take the photos in this post with my point and shoot from less than five feet, at times. The pair above is a male and a female, the former being the one with the brick-red plumage. Note their large parrotlike bills with the distinctive crossed mandibles. We were quite excited to see at least one fresh juvenile with the flock; a bird that probably has only been out of the nest a few weeks and was still heavily streaked. 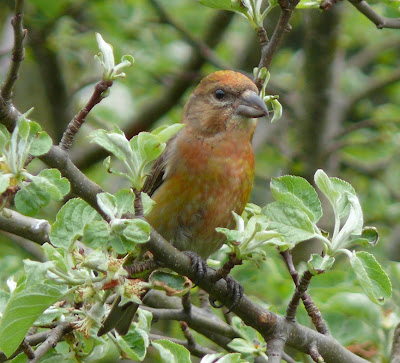 Crossbills use their strange tong-bills to force open the scales of conifer cones. The bird then darts its barbed tongue into the cone's depths and deftly extracts the protein-rich seeds. They're good at this, and an adept bird is said to be able to harvest several thousand seeds per day. 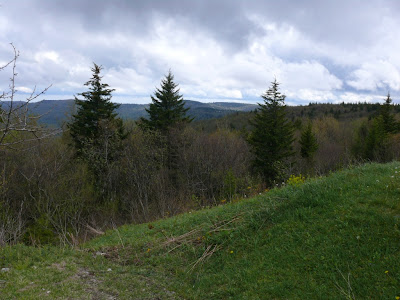 Red spruce dot the summit of nearby Black Mountain, which rises to over 4,500 feet. We had a dozen or so flyover crossbills here as well. The spruce are their primary food source, and as spruce cone crops go, so goes the crossbill. When cones are abundant, the crossbills respond and rear more young, and in lean crop cycles the birds can be scarce and quite tough to find. 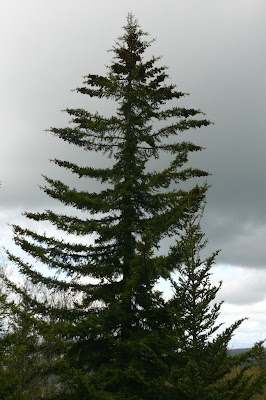 Stately and symmetrical, this towering red spruce was crowned with dense masses of cones, ripe for the plucking. So were just about all of the mature trees that we saw, and thus the crossbills are like feathered kids in a coniferous candy shop. 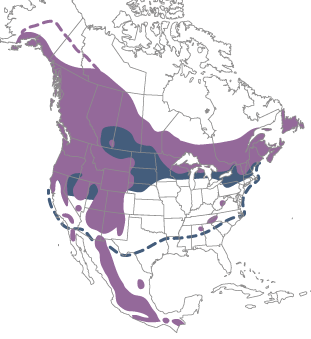 But there is more to the story.

Red Crossbills are a complex species, and have been divided into nine "types". Some authorities believe that all of them warrant recognition as distinct species; others think that at least a few of the types should be split out; and conservatives such as your blogger feel that the types perhaps merit subspecies level distinction at best.

But it is possible that some carving up of the Red Crossbill may occur in the future. If so, we'll have to work hard to determine which types these southern Appalachian crossbills are. Apparently they are most likely the so-called Type 1 or Type 2 populations. The best - only? - way to separate the types in the field is by vocalizations, so if any "new" species are split, you can be assured there will be many birders trying to master the subtleties of Red Crossbill calls.

The photos came out great, I'm sitting here with a big grin on my face; what an awesome experience. :)