I found this big cocoon last January, stitched to the branch of a shrub. It would (hopefully) go on to hatch one of our largest and most spectacular moths, the Cecropia, Hyalophora cecropia. Well, apparently the mild winter or perhaps other factors were conducive to the 2012 Cecropia hatch, as there seems to have been more reports of the adults this spring than I can ever recall. I wrote more about Cecropias and their life cycle HERE. 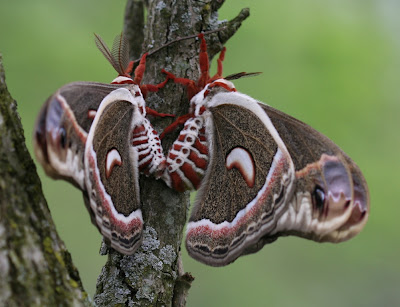 Jennifer Thompson had the great fortune to stumble into this pair of Cecropias in western Ohio, and made the spectacular image above. Giant silkmoths such as this species, for all of their beauty and grandeur, live for only a week or so. Their sole purpose is to find each and mate, and these two moths have obviously succeeded in this task. The smaller bodied male is on the left; he has much more grandiose antennae - they resemble little ferns. Now that he has accomplished his biological duty, his time will be short indeed. After she dumps her eggs on suitable host plants, the female's number will soon be up.

Cecropias and other large silkmoths find each other via pheromones released by the female. The male uses highly acute sensory receptors in its elaborate antennae to pick up the trail of the female's airborne scent, and   male moths can supposedly detect female pheromones from a mile or more. Place a fresh female in a paper bag, outside, and watch in amazement as a male or males eventually materialize from the gloom of night and alight on the bag. 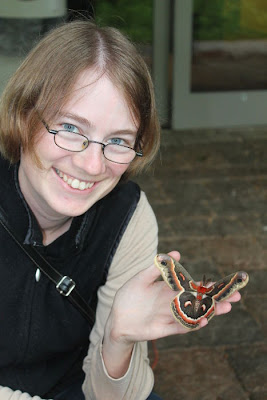 Seabrooke Leckie holds a beautiful male Cecropia; she and others found it recently in Pennsylvania. Her hand provides scale for the massive bat-sized insect. Ms. Leckie would have been especially delighted to see and handle this moth, as they are particularly near and dear to her. 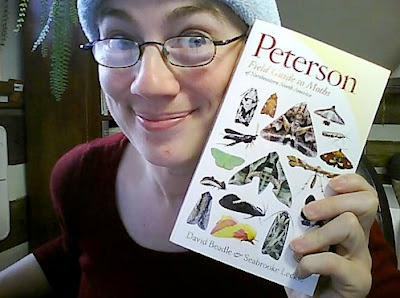 Seabrooke, along with coauthor David Beadle, are responsible for the landmark book, the Peterson Field Guide to Moths. This guide is hot off the presses and is garnering scads of positive attention. Moths are beautiful, complex, and fascinating creatures, and until the release of this book there was no real user-friendly publication for identifying them. 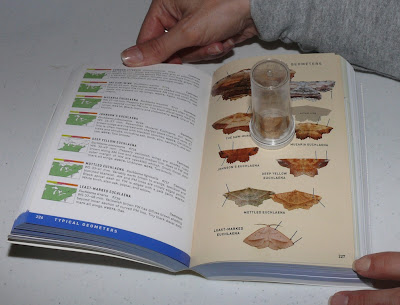 I recently spent time with Seabrooke at the New River Birding & Nature Festival in West Virginia, and we were able to trap moths on two different evenings. Her book was most helpful in determining the identity of the various animals that we captured. In this photo, a temporarily detained deep yellow euchlaena rests in a vial over its image in the field guide.

Moths play an incredibly important role in our various ecosystems. They pollinate, provide food for predators such as bats, and were it not for their caterpillars, many of our songbirds would go extinct. Besides, they are one of the most beautiful groups of all of our insects, and that's saying a lot. If you wish to learn more about the world of moths, I would highly recommend picking up a copy of Seabrooke's book. You can order one HERE, or HERE.

Oh, man. Just what I need, another field guide. Oh well, I haven't bought a new field guide in a few weeks.

About an hour after I posted my previous comment, my husband went out to do a little weeding, and shortly came to the door and said Get the camera! You wouldn't believe this moth! And darned if it wasn't the same moth! Placidly resting on a beautiful frond of lemon mint. And a beauty he is! Finally Mothra took off into the distance, blotting out the sun with his spectacular wings.

One rainy night I drove the entire W Va turnpike. The street lights were swarming with all sorts of giant moths. It was amazing. I rarely ever see large moths. Since then I have seen only one in my neighborhood. I wonder if ever will see something like that again.

I have a hard time believing it has been 19 years since the Lorain County green tailed towhee. I tried to see that bird a couple times without any luck. 19 years ago my yard was swarming with warblers in the spring and fall. Every morning I would wake and open my bedroom window and listen for who had arrived that night. I used to see so many magnolia warblers in my yard I thought everyone must have them like that. Now I never see them.
I once saw about 50 yellow warblers land in a marsh in the Cleveland metro parks together and swarm the trees around the cattails. I haven't seen anything even close to that again. How strange to realize that these things were so special. I assumed that every year must be like that. I was wrong. The past two years I haven't even had good days at Magee.
Maybe its just me but there just aren't as many birds around as there used to be and it is sad.