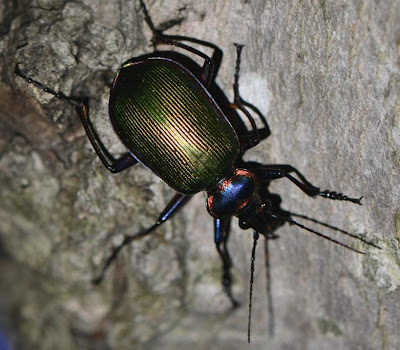 A caterpillar-hunter, Calosoma scrutator, in a rare moment of repose. If you are a caterpillar, this is the last thing you want to see headed your way.

Last Wednesday night, moth expert Seabrooke Leckie had set up her traps outside the New River Gorge Visitor's Center near Fayetteville, West Virginia. Following that evening's program - part of the New River Birding & Nature Festival - the group wandered out to see what Seabrooke had captured. She uses white sheets that are brightly lit, and the lights lure all manner of moths, and other bugs. I was delighted when she returned from a check of the sheets carrying this splendid beetle, in part because they are cool, and also because I had never made any decent photos of caterpillar-hunters. 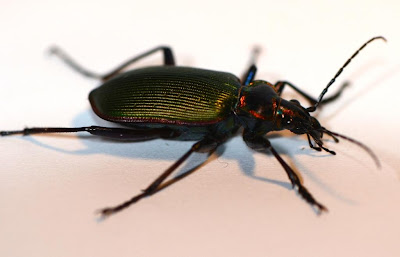 These large (up to an inch and a half!) beetles are almost over-endowed with interesting features. After their hulking size, the observer is drawn in by the beetle's fantastic coloration. The wing covers are an exotic, iridescent green, outlined in purple. The animal's pronotum - that armored plate behind the head - is greenish-blue, and trimmed in shimmering bronzy-gold. And check those legs. Lengthy and stiltlike, these legs can propel the beetle at a fairly astonishing clip. Yes, we've got an exotic bug that meets the highest possible standards of entomological aesthetics. Any caterpillar that is run down, ripped to shreds, and unceremoniously devoured can take solace in knowing that it fueled one of Nature's most beautiful insects. 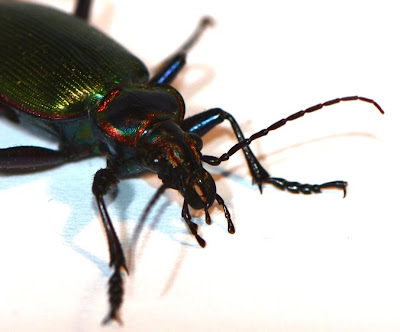 Caterpillar-hunters are glimmering six-legged cheetahs of the beetle world. Active by night - when the vast majority of caterpillars emerge to nosh on tree foliage - the beetles prowl the limbs and branches of the arboreal world. Note those palps projecting from the beast's snout. These antennae-like insectian curb feelers help the animal sense prey. And if you are the sensee, their gentle whisk will be your last good feeling. A split second later the beetle will seize you with its massive pincer-mandibles, and tear you asunder.

One must exercise some caution when handling caterpillar-hunters. They've got two compelling deterrents to would-be predators. One, of course, is those powerful mandibles, which can deliver a painful nip to a person. The other is a chemical defense. A cornered caterpillar-hunter releases a VERY malodorous plume of noxious substances, as everyone who saw this animal can attest. After we worked with the beetle for a bit, the foul smell subsided, fortunately.

After we finished with the photo session, we released the beetle into a nearby tree. This species can overwinter, and individuals allegedly can live for three years. So, many more caterpillars are likely to come face to face with a nightmare on six legs before this animal's run is complete. 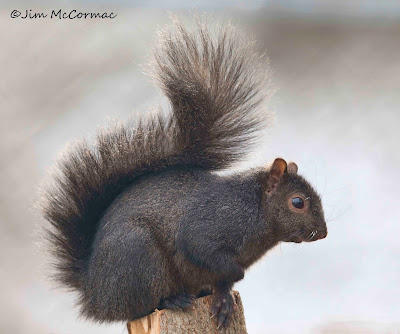