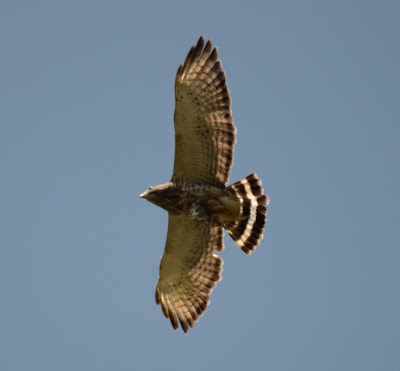 A Broad-winged Hawk soars languidly over Cranberry Glades, West Virginia. We had just been watching a Black-throated Blue Warbler when this raptor arced his way towards us, tracing lazy circles in the blue sky. Closer he came, until the hawk was directly overhead. 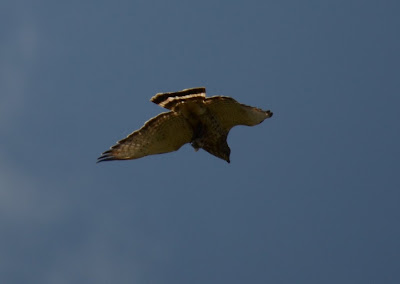 Wait! He has something in his talons! Like a boastful cat that brings his freshly slain mouse to his masters within the house, it was as if the Broad-wing felt the need to show off his kill. 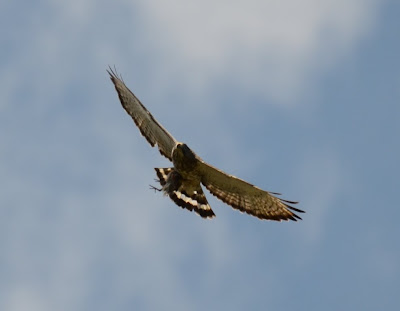 Now we can better see the victim dangling below its vanquisher. Click the photo - as you can with all of the photos on ths blog - and you'll better see the limp feet hanging. A number of us at the New River Birding & Nature Festival carefully examined my series of photos later that evening, attempting to determine the prey's identity. We arrived at the conclusion that it must be a juvenile Ruffed Grouse.

Having eaten Ruffed Grouse, I can attest to their tastiness. This Broad-winged Hawk is indeed a connoisseur of the woodlands' finer fare. A piece on the Ruffed Grouse Society's website states: "Most Ruffed Grouse die a violent death to provide a meal for one of a number of meat-eating predators...". How true it is.