I seldom write about scat. There's a reason for that. In general, scat is not very showy, and frankly it isn't that interesting. I know of people who love the stuff, and gush enthusiastically over every piece found, trying to pin a name on the beast that expelled it. While I don't mind trying to identify the stuff - just another outdoor skill that reveals something of one's surroundings - in general I quickly pass scat by.

However, exceptions must be made, and this is one of those cases. 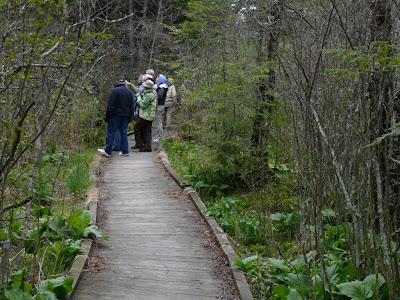 The boardwalk at Cranberry Glades Botanical Area in the Monongahela National Forest of West Virginia. Large mammals are often found here, sometimes flat-footing it right down this very boardwalk. And, yeah boy, these jumbos of the forest produce some awe-inspiring scat! 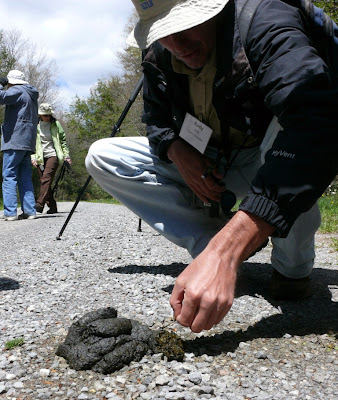 We were up in these highlands last Wednesday, on a foray as part of the New River Birding & Nature Festival. Strolling down the road past Cranberry Glades, we were seeking such feathered lovelies as Canada and Blackburnian warblers, Red-breasted Nuthatch, and Veery. Looking far down the road, I spotted this large pile in the gravelly lane. Briefly considering - and quickly rejecting - the temptation to center the mound of stuff in one of our spotting scopes, we instead rushed rapidly to the scene.

Black bear scat! Oh, what a thrill this was for our participants! And fresh, too! The trained observers among us dated the heaping pile at perhaps a day old.

Now, this is where we enter the psyche of our leaders, and a strange world it is within these brains. I suppose most people would pause briefly, marginally wowed by the sheer volume of the stuff, and hustle onwards. Not us. People dropped to the roadway, the better to get eye level photos, and in a shocking violation of Miss Manners' golden rules, guide Rudy Gelis started poking through the stuff with a stick. 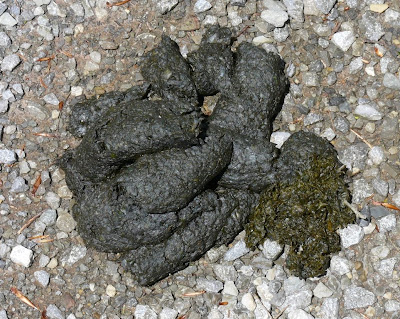 Well, we were glad Rudy had the temerity to dissect this stuff, as we learned a lot about this particular bear's diet. It turned out that we had a vegetarian bear roaming these woods. At least, it's eating plants for now. Black bears are consummate omnivores - they'll eat just about anything that's available, meat or plant. Some thought that much of the green matter in this scat was skunk-cabbage, Symplocarpus foetidus, which certainly abounds in the adjacent bog. That was a fascinating tidbit to me, as I can hardly imagine anything consciously selecting that foul-smelling stuff for salad greens. But then, I'm not a bear. 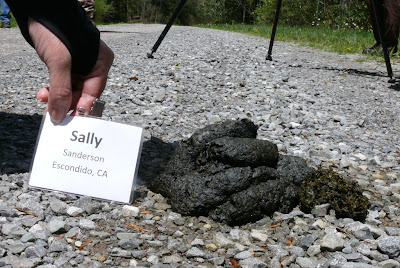 Sally kindly offered her name tag as a size scale. Upon reflection, we weren't sure that was a great idea. I think it was her husband who pointed out that people who see this photo might think she was boasting...

But rest assured, the leafy pile is the product of a bear, and to answer the oft-asked question, it was indeed in the woods.
at May 09, 2011

The last photo with the nametag is classic.

Glad to know Sally loaned the name tag- for a scary moment I thought it was found in the bear scat, along with bells and pepper spray.