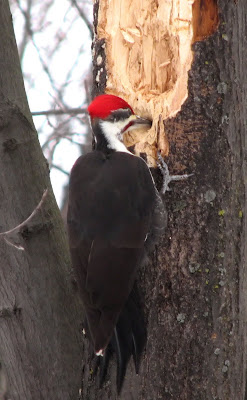 Photo courtesy Wikipedia Commons
A male Pileated Woodpecker caught in the act of deconstructing a tree. These very large, extremely powerful woodpeckers have an exceptional ability to alter ecosystems. They are a true keystone species: an animal whose actions and behavior benefit or at least affect a great many other organisms. In this sense, they could be considered avian counterparts to beavers. Those furry tail-slappers are engineers extraordinaire and their tree-felling and dam constructing have wide-reaching, profound influences on their local environments. 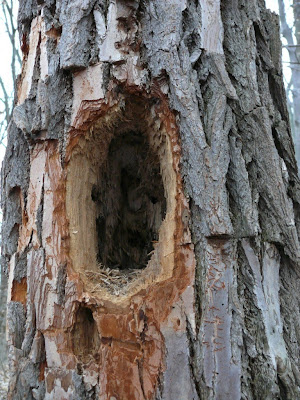 So does the work of the Pileated Woodpecker. Having a few of these chisel-billed giants roaming the forest is aking to turning loose some pathological vandals armed with jack-hammers. Above, the telltale excavations of a Pileated. The large holes above resemble their nest cavities, which are quite large and oval-shaped. However, the creator of these holes was after carpenter ants, a favored food. Click the picture and expand it, and you'll make out the galleries - tubular passages - created by the ant colony. Somehow, Pileateds are adepts at divining the locations of ant colonies, and unerringly boring into even seemingly healthy trees to get at the heart of the colony. This giant pecker of wood is our only bird that is capable of such work; the lesser woodpeckers don't have the wherewithal to excavate such sites. 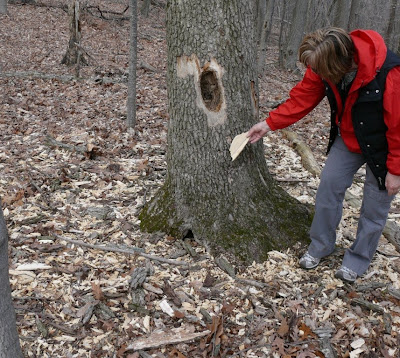 Kathy McDonald provides scale to some recent tree work by a Pileated Woodpecker. We ran across this excavation project on a recent Adams County foray, and all were awed by the woodpecker's chopping abilities. Kathy is holding one of the chips that litter the base of the tree, part of the detritus left by a recent frenzy of drilling. Lots of little things probably happen soon on the heels of a Pileated Woodpecker working over a tree like this. Various insects now have an entrance to the tree's innards, and can begin attacking otherwise off-limits inner tissues. Lesser woodpeckers drop by to glean the exposed inner core, and small mammals may use the large excavation holes. Forest floor decomposers set to work on turning the felled wood chips to dirt, and various fungi begin to grow on the exposed wood. The tree, which was probably already doomed to a premature ending by the ants within, has now had its life cycle greatly accelerated by the Pileated Woodpeckers. Their large excavation holes, especially ones near the base of the tree, can weaken the tree's core severely enough that it's likely to fall before long. 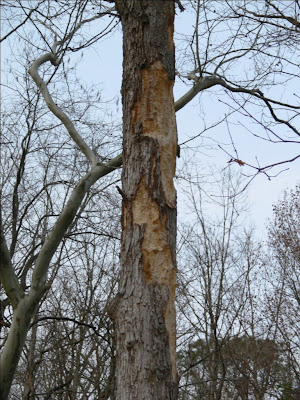 The upper portion of the tree in the previous photos looked like this. Huge areas of bark had been scaled off by the woodpeckers, and when they do this, it's often outbreaks of wood-boring beetles that they're after. So, our poor tree probably was hit by a double-whammy - carpenter ants, and beetles.

The upshot is that the work of the Pileated Woodpeckers probably greatly hastens the demise of the tree, its fate to fall to the forest floor before long. When a large tree such as this one crashes down, a whole new set of reactions follow. Now, a formerly dimly lit forest floor becomes a sunny opening, and pioneering herbaceous plants that are adapted to bright conditions jump into the gap. Thus, botanical diversity spikes, and so do the flowers and nectar available to pollinating insects. As a consequence, numerous flower-seeking insects begin to utilize the forest opening, and on their heels come the predators: spiders, assassin bugs, parasitoid wasps and tachinid flies, etc. For a while, our Pileated-created forest opening will be awash in life - far more species than were present before the tree tumbled down.

Pileated Woodpeckers have been lumbering in our forest for eons; far longer than we've been around, and hopefully long after our demise. And whether they know it or not, theyre true architects of biodiversity.
at April 09, 2011

This was an excellent posting. I knew the concept of keystone species but this write-up really nicely explains the process full circle.

Is it true that when one ant sneezes, he gives the rest of them away?! haha

I love these birds. I have them here. One year I was lucky enough to find him early excavating a hole and waiting patiently I went back and got to photograph them thru the entire breeding season up to fledge. Spent 4 months with them up there in the woods. The male done as much if not more than the female in all duties. Was awesome. Loved this article.

Great post, Jim. I really enjoy it when you're able to explain the full impact of the actions of a species like the Pileated. Thanks for all the info.