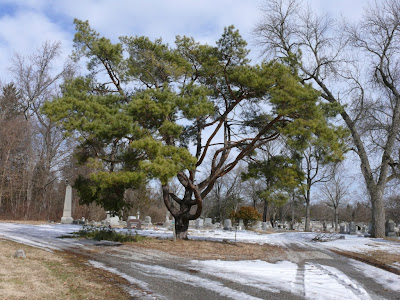 Looking like a giant bonsai, an old Scots Pine, Pinus sylvestris, is a prominent landmark at Green Lawn Cemetery on the south side of Columbus, Ohio. I stopped in last Sunday, and couldn't resist making some photos of this gorgeous specimen. It's by the bridge, and I'll bet three bucks that at least a few of you have seen it, and paused a minute to take in the tree's complexities. Another shapely Scots Pine that is often noticed and commented on is along the northernmost road at Killdeer Plains Wildlife Area. 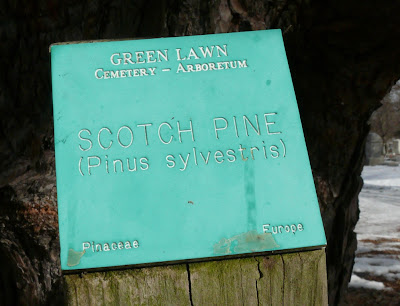 Someone long ago erected an identifying marker, which is a good thing as the tree is so striking that many observers wish to know what it is. One minor quibble: trees, I believe, like birds, should have but one formal common name. And for this pine, it should be Scots Pine. But the moniker is often put forth as Scotch Pine, but not in most serious botany books.
The sign-maker hit the scientific name on the head, though: Pinus sylvestris. And it's this genus - the true pines - that make American botany professors and science teachers blush and mumble, and their juvenile charges chuckle and joke. Pinus = Pee-nus. Dangerously close in pronunciation to that of an appendage best not mentioned in polite company. So we have Pee-nus sil-ves-tris. C'mon, class, repeat after me.
If you've got a bunch of high schoolers or even some juvenile frat boys in the biology class, they'll be suppressing snorts and thinking of jokes. Heck, I still do.
And Pee-nus sil-ves-tris isn't even that bad. Teach 'em the scientific name of the Pitch Pine, Pinus rigida: Pee-nus rij-ih-da. Hilarity is sure to ensue. And if that one doesn't get the kids in stitches, there is always good ole Pinus contorta, or perhaps Pinus flexilis...
But enough of the childish humor. But what if you had six tall pines, and had to state that fact in Latin. Would it be Sextus Pinus erectus?... 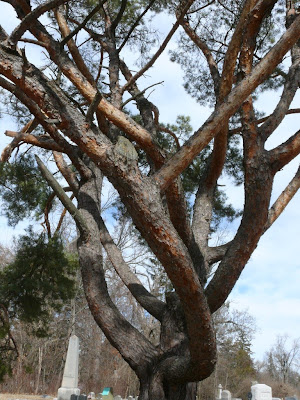 Anyway, this species, no matter what you call it, is a hand's-down favorite of mine. When of the right stock and grown in open conditions, Scots Pine becomes a work of art. The branches are gnarled and contorted, creating complexities that draw in the eye and hold it. 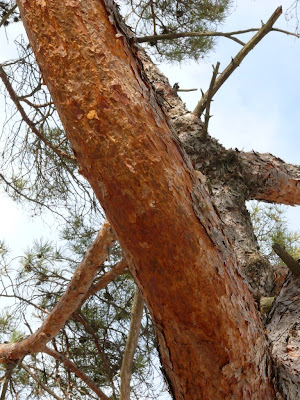 It's not just the alluring form of a well-grown Scots Pine that is so cool - the bark is typically strongly orange-tinted, flaky and papery. The overall effect is nearly magical. Small wonder that this pine, which is indigenous to Europe and Eurasia and ranges broadly across that region, is said to now be the world's most widely distributed pine. People want such a plant, and have transported the Scots Pine far and wide. 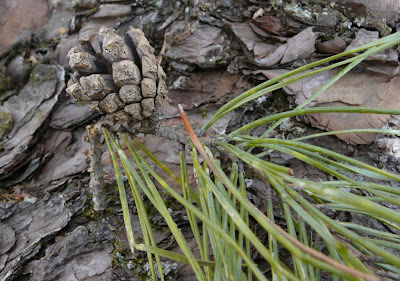 The cones are on the smallish side, with thick wedge-shaped scales terminated with a slightly prickly umbo, or projection. "Umbo", now there's a word for you. I almost named a cat that once. Needles are in pairs, and often take on a slightly glaucous, or bluish-green, tint. 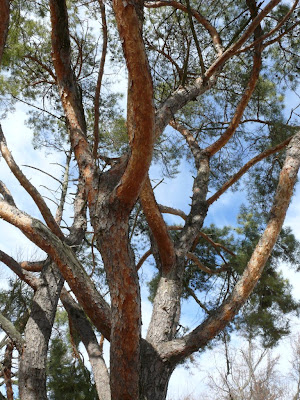 If you find yourself at Green Lawn Cemetery, take a moment to stop by and admire this magnificent Scots Pine.
at February 15, 2011

A very fine, and funny, article!

PS: I sure hope we see your smiling face in NW Ohio when we, Black Swamp Bird Observatory, host "The Biggest Week in American Birding"!

I always thought it was a short i.

Thanks Randy; I always appreciate your comments! And of course I'll be up there in mid-May! I've been going to the bird trail and Magee since before there was a bird trail, and always will no matter what the weekend is called!

On consideration, Cathy, you might want to say "Py-nus"...

Ha! You must have been a pisser in botany class, Jim.