Flowering plants are quickly giving up the ghost, and we're entering a LONG period of dormancy. Those of us with a penchant for botany go through a real dry spell in winter, pining for the return of another spring and flowering things. One of the last groups to throw in the towel are gentians, and they are, as a rule, things of exquisite beauty.

The following photos were all taken in Ohio, and most of these gentians can bloom into October and in at least two cases, November. 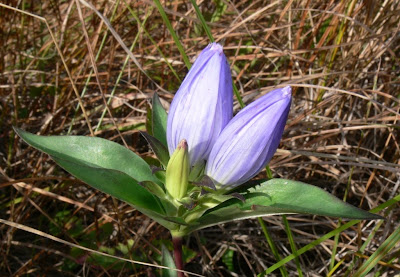 Bottle Gentian, Gentiana andrewsii. Large fuzzy bumblebees pollinate this one. Research has shown that it is the bumblebees of advanced intellectual abilities that successfully enter the flower, as access is a bit of a trick.Dumb bees stick with easier plants (I am not making this up). 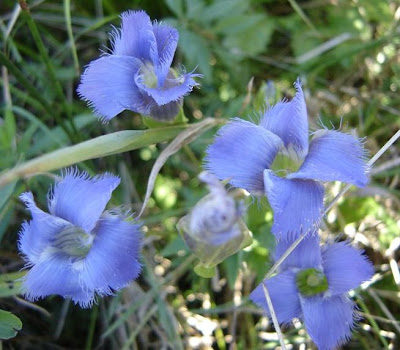 A jaw-dropper by any standard, the Small Fringed Gentian, Gentianopsis virgata (formerly G. procera). This one grows in alkaline prairies and fens, and is one of the most beautiful flowering plants, anywhere. 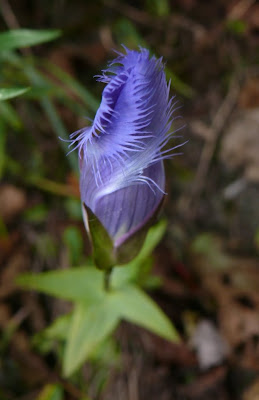 Looking as if spun from a bolt of cobalt silk, a Fringed Gentian, Gentianopsis crinita, unfurls. This one prefers clayey bluffs and banks that are wet and seepy. The above photo was taken at an absolutely spectacular shoreline bluff along Lake Erie in northeastern Ohio. There are several thousand gentians there. 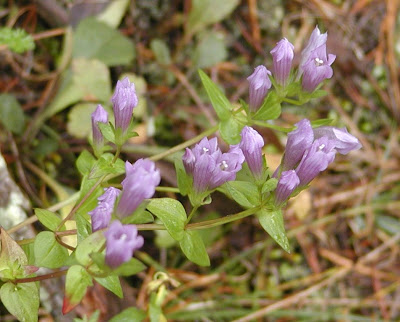 One of my personal favorites is the rugged Stiff Gentian, Gentianella quinquefolia, which prefers dry barren sites. There may still be a few flowers hanging on here and there. The prairies of Adams county in southernmost Ohio are good places to see this species. 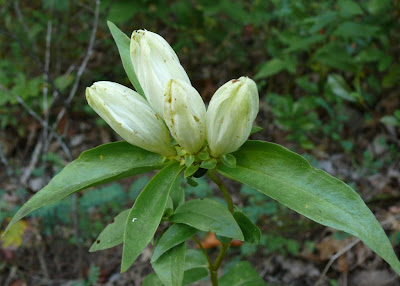 The rather homely Yellowish Gentian, Gentiana alba, is a rarity, known from a handful of scattered sites in southern Ohio. Like all gentians, it has its charms upon close inspection, and what it lacks in looks it can make up for in sheer robustness. I have seen giants towering to several feet in height, and capped with a half-dozen of the odd baglike flowers. 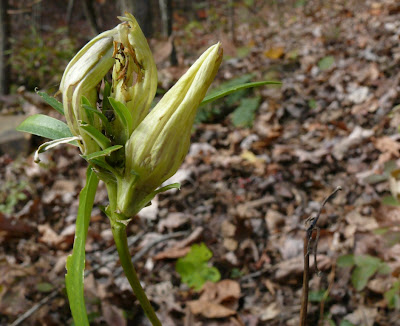 Last, and decidedly least, is the rare Sampson's Snakeroot, Gentiana villosa. This is the last of our gentians to bloom, and I'm sure there are still flowers. I've only seen it a few times, and the first discovery I made of Sampson's Snakeroot was in early November. To be fair, it often does look a little better than the plant in this photo, which was taken a few weeks back in Shawnee State Forest. Droughty conditions seem to have stunted flower development, but even under the best of conditions it really doesn't measure up to the others in the looks department.
at November 10, 2010

Email ThisBlogThis!Share to TwitterShare to FacebookShare to Pinterest
Labels: gentians

I wonder if there are Bottle Gentians here in Georgia - a couple weekends ago when I was up in the mountains I saw a flower that looked just like that and had no idea what it was. Thanks for the clue!

Yes there are, Rebecca, but not the species in my blog post. Probably it was Soapwort Gentian, Gentiana saponaria, that you saw. Google that one up and check it out.

We have a whole field of Fringed Gentian back of our summer place in Michigan's Upper Peninsula growing in a dolomite/limestone environment. I believe they are on the endangered plant list there.