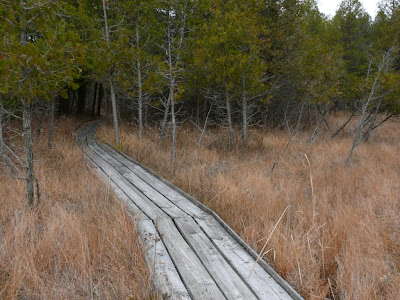 Cedar Bog State Memorial in Champaign County, one of Ohio's most iconic natural areas and a must-see place. I was there briefly on Sunday. It's well past the growing season, but I love to visit all manner of habitats at all seasons. That's how one gets a real feel for plants in all of the various stages of development, and post-mortem stages. 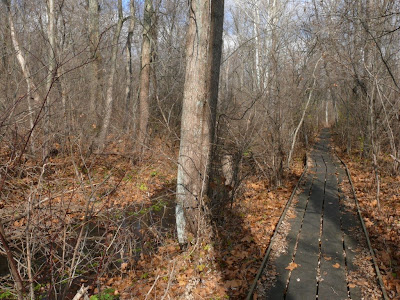 Besides, latest fall and early winter paints places heavy in ochre and sepia; quite attractive and an important reminder of the cycles of life and death. One of the aspects of living in the midst of the great eastern deciduous forest is the prominent change of seasons; something I'd dearly miss if I lived somewhere else. 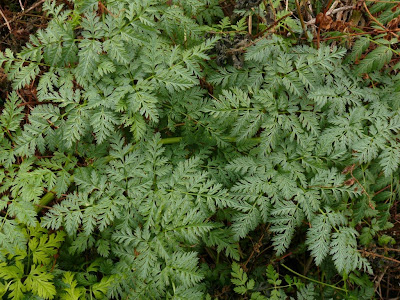 In spite of the lateness of season, there was still greenery to be found. This stuff looked fresh, and if you ate everything in this photo, you'd possibly be killed, dead. The plant is Poison-hemlock, Conium maculatum, and it is the juices of this highly toxic parsley that Socrates was forced to drink as punishment for his impiety. Poison-hemlock is chockful of nasty alkaloids, and even small doses can be fatal.
If you make a habitat of walking roadsides or frequent other open waste areas, you've probably seen this plant. It is quite common throughout Ohio and much of the U.S., yet another example of success of an imported Eurasian weed. 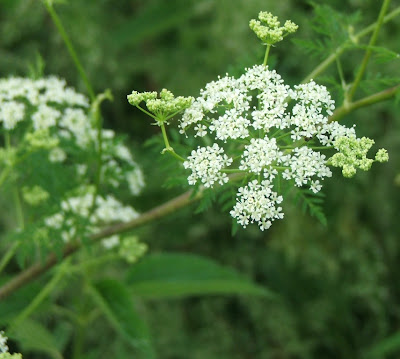 By late spring of next year, the biennial parsley will rocket skyward and develop umbels of flowers that are typical of the parsley family. A good-sized specimen can reach five feet or more in height. 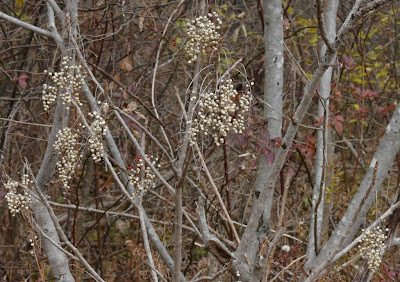 This beautiful treelet is a native, and far scarcer and much more habitat-specific than the previous weed. It is Poison Sumac, Toxicodendron vernix. I have to confess that it is one of my favorite woody plants. One is not too likely to stumble into P-sumac in these parts, as it is quite finicky about habitat choices and for the most part frequents only fens and bogs. As we've managed to thoroughly annihilate about 95% of those wetland types since European settlement, there aren't too many places left to find the sumac.
At this stage, the leaves have fallen, but the showy clusters of porcelain berries remain tightly affixed to their pedicels. That's smart of the plant to hold these fruit firmly until after leaf fall, as it's wintering feathered fruit-eaters such as robins and Hermit Thrushes that snack on them and thus spread the plants.
Don't you try eating Poison Sumac fruit, though! The plants are loaded with urushiol, the same allergen that makes its better known brethren, Poison Ivy, T. radicans, so despised. Brushing up against the plants, even at this season, can cause a nasty rash. 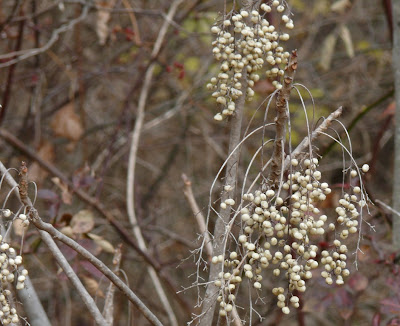 Poison Sumac looks good nearly year-round, and if it didn't have the toxicity issues, I believe it could be plugged to the nursery trade as a landscape plant. Maybe it should anyway; the more daring among native plant landscapers might take a crack at placing it. And, P-sumac would make an outstanding living fence, if your goal is chemically dissuading interlopers from entering the yard. 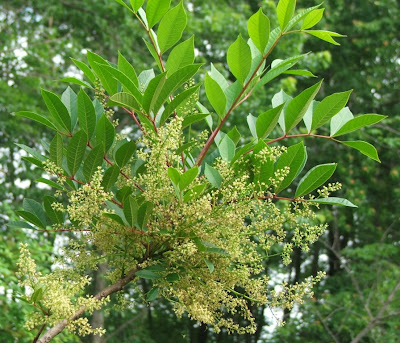 Mid-summer and the plant looks like this: giant, fireworks bursts of greenish-yellow flowers backdropped by big, showy pinnate leaves.
Take a trip to Cedar Bog next year, and see it for yourself.
at November 15, 2010

Jim, I can appreciate your comments about fall color. I am in Bitter Root Mts. of Montana right now and it is beautiful. The green pines mix so well with the cinnamon colored ferns underneath and the white snow on the peaks! Now if I can just find a bull elk and a buck mule deer it will be perfect!!

Burton Wetlands is also a great place to see Poison Sumac, which I agree is a great looking plant. I remember the first time I saw it I almost grabbed a branch to pull down and get a closer look before I realized what it was and enjoyed it at a safe rashless distance.

Hope you enjoyed Montana, Randy! Well, you wouldn't have been the first to inadvertently use Poison Sumac for a handhold while mucking through a fen, Keith, trust me...