A brief trip to Rhododendron Cove

Today was a beautiful Indian Summer finale, presented in glorious technicolor. I spent a few hours outside this morning, at a wonderful state nature preserve known as Rhododendron Cove. It's located at the northern reaches of the Hocking Hills, in southern Fairfield County.

My companions were Lisa Sells, and her husband Steve. Both of them are accomplished photographers, and I wanted to tap their knowledge of SLR cameras and accoutrements. I learned a ton, and believe that I am ready to take the plunge into interchangeable lens. All of the photos that you've seen on this blog - those that I've taken, at least - are made with a Panasonic FZ50. It is a great camera, but I all too often bump up against its limits these days, and want some more sophisticated gear. So, perhaps before long, the quality of photos here will ramp up a notch or two.

Seeing some of Lisa's work, especially with macro subjects, is what finally put me over the edge and on the path to new gear. Check some of her work out RIGHT HERE. 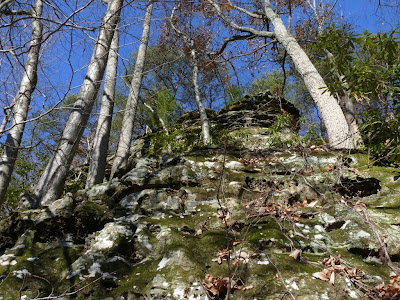 Crisp blue skies provide a rich backdrop to the rugged sandstone cliffs at Rhododendron Cove. The name of this preserve stems from the profusion of Great Rhododendron, Rhododendron maximum, a bit of which can be seen in the upper right of the photo. This is a rarity in Ohio, but not here. Great drifts of the plant cascade through narrow box canyons. 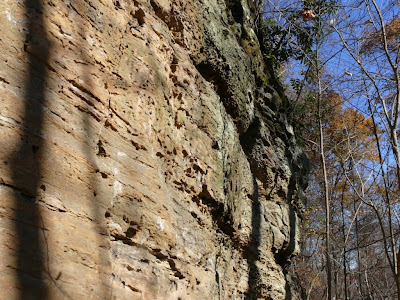 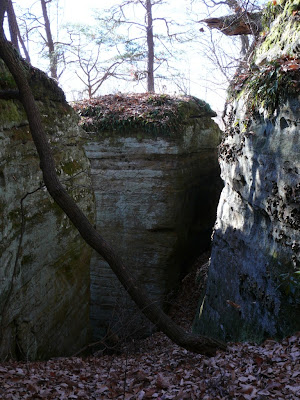 Fracture blocks, many of them the size of small ships, form torturous pathways through the sandstone. Interesting ferns and other saxicolous (rock-loving) plants festoon the rocks. 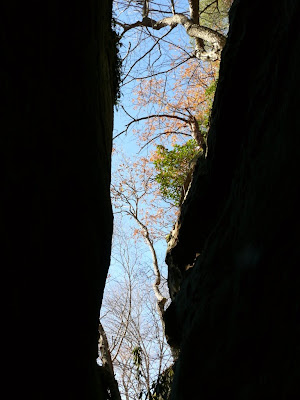 In the abyss, looking out. I'll take these rock canyons any day over those of big city downtowns, polluted and noisy. 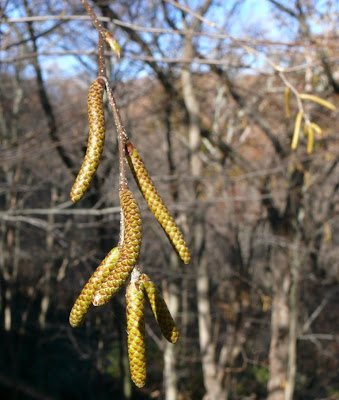 We noted many interesting plants, and paused to make photos of these catkins of Black Birch, Betula lenta. 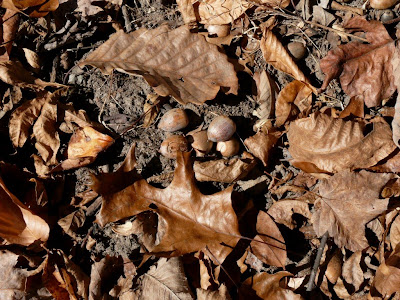 Strolling through the forest was akin to walking on marbles, as the acorn crop is spectacular this fall. Acorns + leaf cover + steep slopes makes one watch their step. Happy were the Blue Jays, though. These crested screamers love a good acorn, and were everywhere. 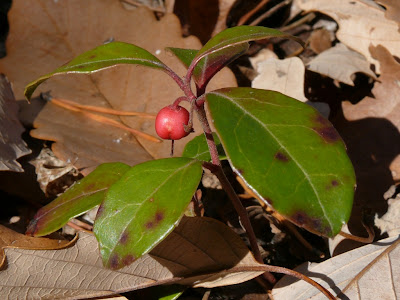 An interesting little member of the Heath Family, Teaberry or Wintergreen, Gaultheria procumbens. You can nibble on this one; it tastes like wintergreen. 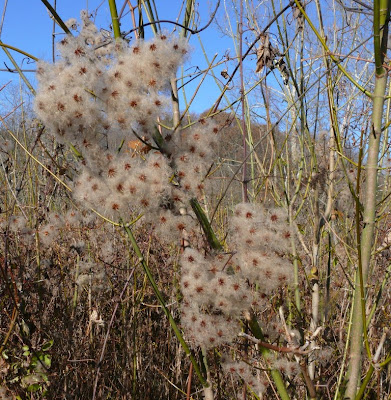 We spent some time in surrounding old fields, which take on a charm of their own in late fall. These orbicular cotton candy-like puffs are the fruit of a vining member of the Buttercup Family, Virgin's-bower, Clematis virginiana. It typically clambers over low vegetation; in this case, saplings of Box-elder, Acer negundo. 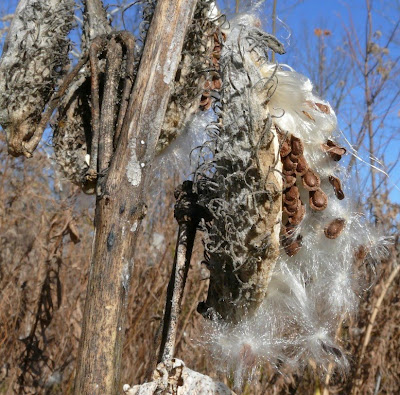 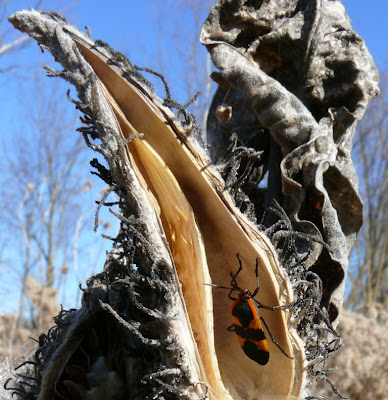 We were pleased to see a number of Large Milkweed Bugs, Oncopeltus fasciatus, still occupying the plants in spite of their advanced senescence. 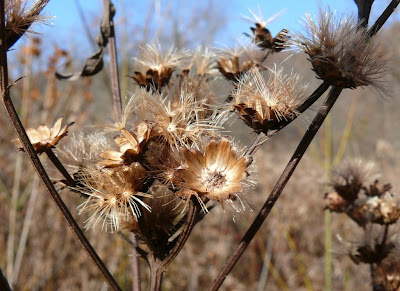 The mostly empty receptacles of Tall Ironweed, Vernonia gigantea. This is the big purple-flowered plant that thrives in old fields and pastures. Good-sized specimens will tower well over your head. There are a few other species of ironweed in Ohio, but you aren't too likely to cross their paths. This one is the default species, found abundantly in every Ohio county. 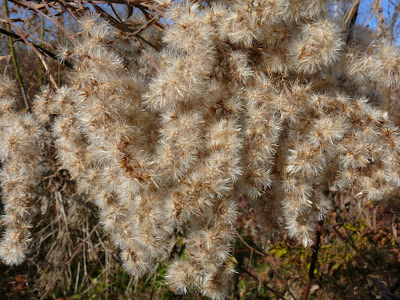 Often derided as a "weed", this Canada Goldenrod, Solidago canadensis, hosts an especially luxuriant plume of fruit. In my estimation, this goldenrod is one of the most important native plants of open successional old field habitats. Those seeds, which the plants hold fast well into winter, are heavily used by many species of seed-eating birds. American Tree Sparrows, winter visitors from the tundra, are especially fond of goldenrod fruit.

I hope that you were able to spend some time afield today. We won't have many days such as this one left.
at November 11, 2010

Jim- You'll love a DSLR! Let me know if you have any questions.

I spent a week in New York's Hudson Valley in October and saw similar cliffs and plants. I got to nibble on Wintergreen, and I also nibbled on Black Birch twigs with the same flavor. I tried some Boylan's Birch Beer and really liked it, so I was happy to discover my local market back in Dayton carries that exact brand in stock.
Brian

You need a DSLR you'll love it although the weight can get annoying at times especially with longer macro lenses. With your interest in bugs I suspect you are going to want a decent macro setup. I use a somewhat similar setup to Lisa and I have some photo's posted up at http://www.thatbugguy.com

It was a privilege to go to Rhododendron Cove with Jim Davidson this past summer on a very hot and humid day. A thunder storm rolled in and we took cover under a rock outcropping overlooking a ravine. That adventure provided some good memories.

Love this post! Sometimes there is almost more beauty in the seed pods/seed than in the flowers themselves.

I can personally attest to the accuracy of your note about acorns, leaves, and steep slopes. Spent quite a few minutes getting up just such a slope. Finally had to scrape away all leaves and acorns to get purchase on the moist dirt slope underneath to finally get up. :-) :-)

You have given the trip to the rhododendron such that you have given us very nice feeling about all of these.