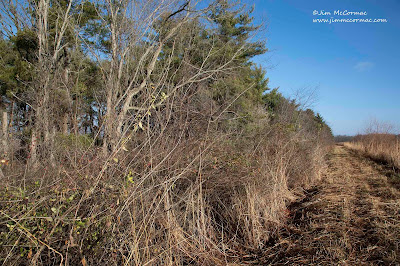 I visited this birdy swath of edge habitat back on December 26, 2021. The first time I stumbled into this place, which is a bit off the beaten track in Slate Run Metro Park, Pickaway County, Ohio, was about a week prior. I wrote a brief piece about that trip, HERE.

Habitat-wise, there is much going on here. Just outside the photo to the right is a large mixed-emergent marsh. Behind me is a fairly mature patch of woodland. Older White Pine (Pinus strobus) can be seen in the photo. Plenty of dead American Elm (Ulmus americana) and Green Ash (Fraxinus pennsylvanica) lured lots of woodpeckers. But the biggest bait of all is prolific growths of Poison Ivy (Toxicodendron radicans), and most of the vines were heavily laden with fruit.

Nonnative Amur Honeysuckle (Lonicera maackii) and Multiflora Rose (Rosa multiflora) was also present, and birds were taking fruit from these plants. Especially American Robins (Turdus migratorius). While I will photograph birds at such plants, it's really not my bag. I do it mostly to document the feathered agents of dispersal that assist such plants in their spread. Not blaming birds for this, of course - many species are opportunistic survivors and will eagerly eat whatever palatable fare we leave in their paths. But I'm far more interested in documenting relationships between birds and native flora.

My main goal here was catching birds in the act of eating berries of the native Poison Ivy. This is a long-running bucket list project for me, and I might have 15-20 species noshing on the much-maligned plant by now.

But I was in for a surprise on this frigid morning and bagged an unexpected species. 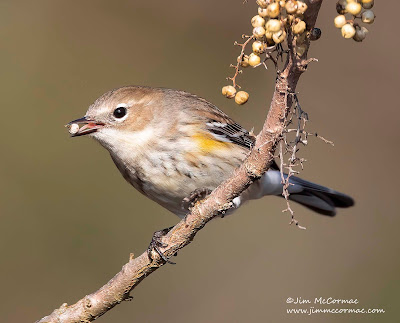 While I have a number of images of Yellow-rumped Warblers (Setophaga coronata) in and among Poison Ivy plants, I had yet to capture a nice sharp image of one with berry in bill. Now I have. At least I think it's nice.
The importance of Poison Ivy to Yellow-rumped Warblers overwintering at northerly latitudes cannot be understated. In fact, I think the plant may be the primary reason that the hardy warblers can ride out cold and snow.
This phenomenon is interesting to me from a long-term perspective. Poison Ivy is very common, now, but it almost certainly wasn't in the not so long ago past. It is an opportunistic successional species, and the large-scale disturbances created by people have unintentionally created tons of habitat for it. I would bet that prior to European settlement, Poison Ivy was much better "behaved" and probably nowhere near as prolific as it is today. 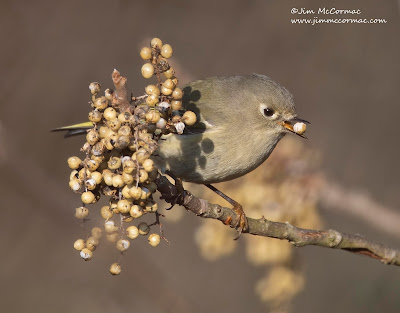 A Ruby-crowned Kinglet (Corthylio calendula) caught in the act of eating Poison Ivy!
ASIDE: Those of you that are interested in scientific names may notice that this kinglet is now placed in the genus Corthylio. It long resided in Regulus, along with the Golden-crowned Kinglet (R. satrapa). Recent studies of kinglet genetics show significant variation between Regulus kinglets and the Ruby-crowned Kinglet. That, along with morphological differences (not to mention behavior) led to the segregation of the genera.
While I was standing quietly watching and photographing fruit-plundering birds, I heard the emphatic jit-jit call notes of a Ruby-crowned Kinglet. This is not a common winter bird in central Ohio, and I wanted to see it. Kinglets are inquisitive and a few crude imitations of its calls brought it raging in through the brush. It was a male, as it made known by puffing its scarlet topknot feathers.
After a bit, the kinglet forgot about me and resumed foraging. I saw it make a few sallies after (presumably) flying insects - probably winter-hardy species like winter stoneflies. It was also grabbing unknown items from branches and bark, these probably insects as well. Suddenly the sprite shot over to a Poison Ivy vine and grabbed a berry! I had read where they will eat small amounts of vegetable matter in winter, but I had never seen this behavior. In the half-hour or so that I watched the kinglet, it made several trips to grab Poison Ivy berries, usually taking a few fruits each time. Like most everything that kinglets do, he was quite speedy and it was tough to get a clear shot of him in the act. This is the only acceptable image that I managed, but it certainly provides proof that Ruby-crowned Kinglets occasionally join the ranks of Poison Ivy-eating birds.
at January 08, 2022

I agree with you about the niceness of the berry-eating warbler image! This sounds like a great winter walk.