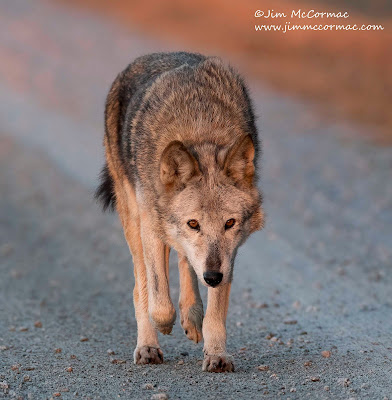 A Red Wolf (Canis rufus) ambles my way. I think this is just about the moment she realized someone/something was watching her.

The highlight of my recent trip through the Carolinas, Georgia, and the Atlantic Coast of Florida was a mammal. In spite of it being primarily a bird photography trip.

The Red Wolf is one of the rarest mammals, anywhere, with perhaps seventeen individuals in the wild. All of them occur in the Alligator River National Wildlife Refuge in North Carolina. I was fortunate to see one, and beyond fortunate to get the looks (and photographs) that I did. 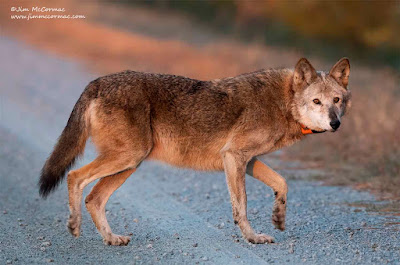 The wolf casts a last glance my way before trotting into nearby woods and melting away. She sports a radio collar - about seven of the wild wolves have these.
I'll tell the story of the Red Wolf in more detail here, soon, as it will be the subject of my next Columbus Dispatch newspaper column. Suffice to say it was an unexpected and thrilling experience. Fortune also literally shined on me as the light was beautiful and golden, and the sun was setting behind me.
A bit about how I came into such proximity to the beast. I had just turned onto a seldom-used gravel lane, headed towards a spot that American Black Bears frequent. Shortly after turning, I saw an object nearly a half-mile down the road, stopped, and glassed it with 10x binoculars. It was obviously a canid, although I could not tell if it was an Eastern Coyote or wolf from that range. But it seemed to be working my way.
I pulled the Jeep off the road, grabbed the 800mm lens/rig, eased out of the vehicle onto my knees, gently pushed the door shut (never slam doors!) and crawled around the back of the Jeep. It would have to serve as my blind, there was no time or opportunity to explore other options.
Amazingly, the animal kept ambling my way, stopping occasionally to look around and test the air. A few times it made brief forays into the vegetation. Perhaps it was hunting rabbits, which often come to roadsides around dusk. Fortunately for me, I was downwind so it couldn't get any scents, and the sidelined Jeep did not seem to interest it. As it drew nearer, I realized what I was looking at, crossed my fingers, and hoped it kept coming.
VEHICLE NOTE: My Jeep has auto headlights - they might have been deployed by this time. Fortunately, I had remembered to turn them off. When working from the vehicle in sparsely peopled areas, I usually keep the headlights off as long as possible. Had they been on when I turned onto the wolf road, the lights might have spooked the animal.
I've been forced to use the Jeep as a blind before, and when doing so rest the big lens butted up against part of the bumper, keep my body behind the vehicle, and thus offer the subject only a view of the lens' working end (the lens body is clad in camo) and a small part of my head and arm. It seems to break up my bipedal profile enough to sometimes keep warier animals from skedaddling.
Nearly everyone into natural history that visits this place knows about the wolves, me included. I just didn't expect to see one. Anyway, the animal eventually got to within 75-80 feet or so and was an easy mark for my big lens. The second shot above was my last, by which point she certainly realized that something was amiss. Her last pose was a beauty, though.
I probably could have just turned around and headed for home after this experience :-)
at January 23, 2022

Wow! What an amazing experience. So happy for you—thanks for sharing.

That had to be an amazing experience!!

Lucky you. As Ah Wang said, "Never underestimate luck". Whether the red wolf is a valid species, a hybrid between the coyote and Algonquin wolf, or ... is still an unsettled question. What is rather obvious is that the red wolf is doomed by hybridization with eastern coyotes -- unfortunately. In any case, that had to be a wonderful experience.

Great photos! Let me know if you want to talk shop about red wolves, I've been working on them for a few years. The very latest estimate from USFWS is 8 collared wolves and a total wild population of 15-17, though even they appear not to believe the 17. They aren't quite all at Alligator River NWR, a few more are at Pocosin Lakes NWR and some other spots. Thinly spread at this point. Despite the commonly held viewpoint that coyotes doom them to extinction, the evidence is good that the DNA from the last few wolves along the Gulf Coast is persisting well in the wild canid population there, and in fact may be expanding over time. Coyotes certainly complicate things, but the real threat over the past 5-8 years has been gunshot and trapping mortality.

Magical! Recently there was an article in the New York Times about coyotes on Galveston Island who have red wolf genes, from past hybridization! You should read this: https://www.nytimes.com/2022/01/03/science/red-wolves-dna-galveston.html