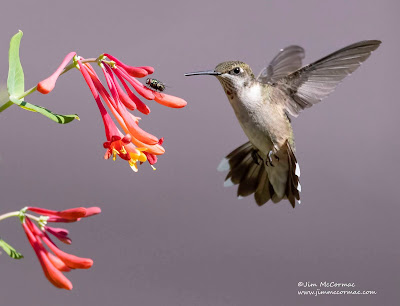 On the long-term bucket list is photographing Ruby-throated Hummingbirds at every major native plant nectar source with which the birds have an intimate co-evolutionary history. Thanks to a friend who lives nearby, I was able to obtain images of this female/immature male Ruby-throat at the beautiful flowers of Trumpet Honeysuckle, Lonicera sempervirens.

NOTE ABOUT NATIVITY: Trumpet Honeysuckle is a southerner, and reaches its northern limits in southernmost Ohio. In my opinion, there is only one indisputably native Ohio population, in Scioto County (and not all botanists would agree with my opinion of that site, but that's another topic). So, this planted honeysuckle patch in Columbus is clearly beyond the species native range, but the hummingbirds don't care.

Anyway, it didn't take long after I set up my rig for the hummers to start hitting the flowers. There was also an adult male, but he didn't visit as often and never gave me a good shot. This bird was pretty easy to work, and I obtained a number of nice images. Of them, I liked this one the best. As I waited for its visits, I noticed that the "greenbottle" fly favored this group of flowers as a perch. When the hummer came in and I made this particular shot, she/he took umbrage at the fly, confronted it accompanied by loud chitters, and sent the fly packing. The bird then proceeded to plumb the deep floral nectaries with its long bill and tongue. While perhaps some larger sphinx moths might visit Trumpet Honeysuckle at night, and be effective pollinators, it's hard to think of pollinators that would be more effective than a Ruby-throated Hummingbird.

Because of their relationship with flowers, hummingbirds come into confrontations with large insects constantly. Bumblebees in the genus Bombus are common rivals, as are larger species of wasps. Sometimes big insects clearly win out, as when a large bumblebee is working a flower - the hummers usually wait for it to depart. This fly was no match though, and the bird quickly drove it away.

PHOTO NOTE: I generally do not like the look of flash on birds, and rarely use it on the feathered crowd. Hummingbirds are an exception. The flash does not seem to bother them at all, and the light makes the feather iridescence really pop. However, on this day light was abundant and well situated, so I did not use flash. This image was shot at 1/6400, f/8, and ISO 3200. While the ISO is beyond what I would prefer, the camera is the (fairly new) Canon R5 mirrorless, and it handles higher ISO ranges pretty well. I made a series of shots - since my little subject was so cooperative - ranging from shutter speeds of 1/1600 clear up to 1/6400 (maximum shutter speed for the R5 is 1/8000). When a hummingbird is really working those wings hard to maneuver around flowers, a speed of at least 1/5000 is necessary to mostly freeze the wings.

Hi Jim-
Love this image! Question for you - why isn’t this a juvenile/immature male? The spotting on the neck (and I think I see a small dark area which could be a red gorget spot) makes me think it’s possible. Thanks! (I enjoy following your blog!)

Thanks Anonymous! And, you're right - it could be a young male.