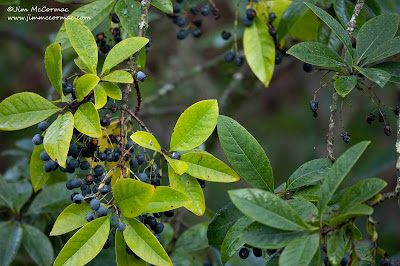 A Fringe-tree (Chionanthus virginicus) heavily laden with ripe fruit. This shrubby (small treelet, at best) member of the Olive Family (Oleaceae) is a close relative of ashes. It flowers in spring, and produces pleasing bouquets of stringy white-petaled flowers. Come fall, the blue drupes (as the fruit are called) also create an aesthetically pleasing appearance. With the added - and more important - benefit of feeding long-haul migratory songbirds.

While the somewhat similar Chinese Fringe-tree (C. retusus) is sometimes used in landscaping, the one featured here is the native. In the interior, it occurs as far north as southern Ohio. The trees in my images were planted at Inniswood Gardens, a metropark in Westerville, Ohio, only 15 minutes from where I live. This site is probably about 80 miles north of Fringe-tree's native range, but who are we to split hairs. The tastiness of its drupes are certainly well known to songbirds engaged in long migrations between Neotropical wintering regions and northern breeding grounds. These birds have undoubtedly long known and utilized this plant's autumnal bounty. 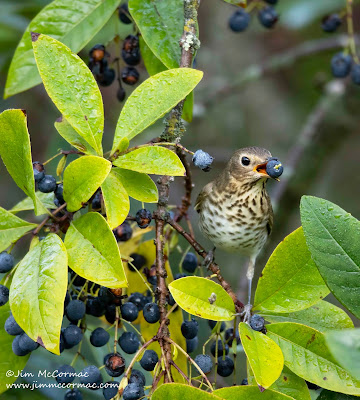 A Swainson's Thrush (Catharus ustulatus) with a freshly plucked drupe. Larger birds like this swallow the drupes whole. Many of these speckle-bellied thrushes were present on this mid-September day. Swainson's Thrush is the most common of our highly migratory thrushes, and they breed across the great expanse of North American boreal forest, from Alaska to Newfoundland, and south at high elevations in the west. Most birds winter from Central America south to western South America, all the way to Peru. 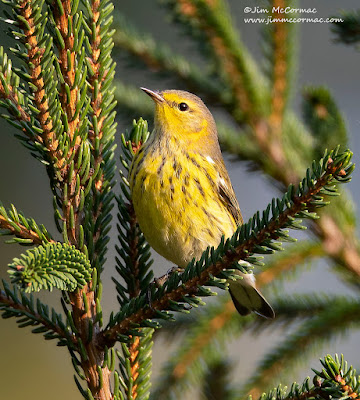 A Cape May Warbler (Setophaga tigrina) perches briefly in a nonnative Norway Spruce (Picea abies) near the Fringe-trees. This warbler is another boreal breeder, and intimately linked to spruce on the breeding grounds. Even migrants seek out spruce, including the nonnative species. Cape Mays breed in a fairly narrow belt of boreal forest, from Alberta to Nova Scotia, and most winter in the Caribbean and the western coast of Mexico and Central America. 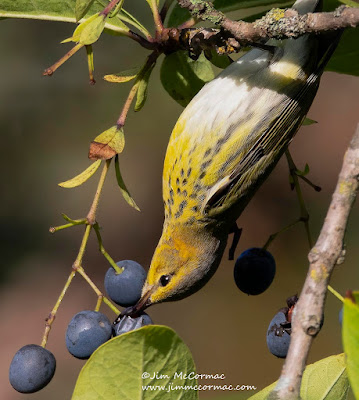 Come fall, Cape Mays often become frugivorous, plundering the bonanza of berries to be found in autumn in the eastern deciduous forest region that blankets much of eastern North America, as far north as southern Canada. Unlike the larger thrushes, warblers such as this typically puncture the skin of fruit with their sharp bills. They then drink the juices and perhaps eat some of the pulp. Many Cape May Warblers regularly visited this small Fringe-tree planting. 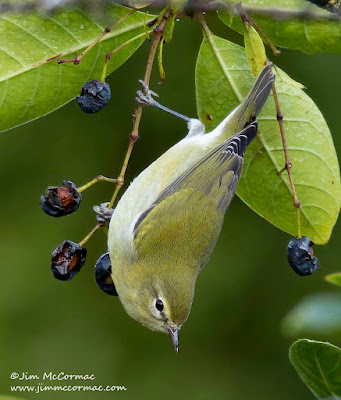 The most frequent frugivorous warbler at the Fringe-trees was the Tennessee Warbler (Leiothlypis peregrina). This one strikes a pose amongst some drupes, all of which bear the tell-tale evidence of feeding warblers.
While warblers are highly insectivorous during the breeding season, some add much vegetable matter in migration and winter. Tennessee Warblers winter throughout the Caribbean, much of Central America, and well into South America. I have seen them by the score in winter in Guatemala, where they avidly take nectar from the flowers of various trees. So much so that their faces are often stained bright colors courtesy of the nectar. 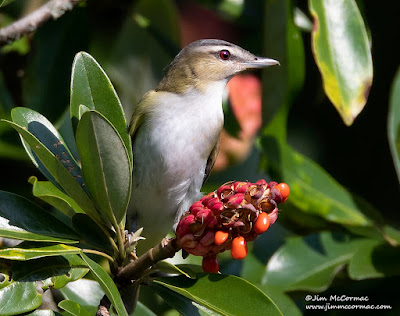 As a bonus, a stone's throw away was a gorgeous Sweetbay Magnolia (Magnolia virginiana) loaded with ripe fruit. Birds galore were taking advantage, including many Swainson's Thrushes, occasional thrushes of other species, especially American Robins (Turdus migratorius), Gray Catbirds (Dumetella carolinensis), and most surprisingly to me, lots of Red-eyed Vireos (Vireo olivaceus, pictured).
Vireos are notorious for the number of caterpillars they take. The raptor-like hook at the bill tip is an adaptation for seizing and tearing open larvae, or so I assume. Vireos are closely related to shrikes, which are highly predatory songbirds and sport even more of a hooked raptor-type bill. In the case of the vireo, this bill also works well when plucking fruit. 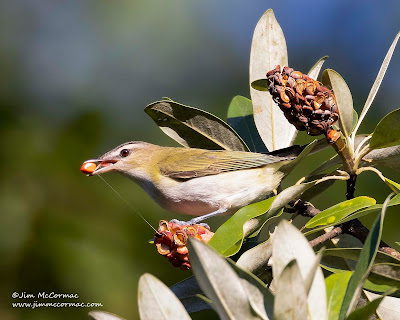 A Red-eyed Vireo, caught in the act of fruit plundering. This does not take long. As soon as a bird freed one, it quickly swallowed it. Something about Sweetbay Magnolia fruit is very attractive to this species, which I did not know prior to this experience. At times there would be perhaps a half-dozen vireos in the tree together, and a few times they were joined by a Philadelphia Vireo (Vireo philadelphicus). As with the Fringe-tree, Sweetbay is a southerner not occurring until 100 miles or south of central Ohio. But in the south and in the Atlantic states it can be common and birds have undoubtedly long used it as a food source. 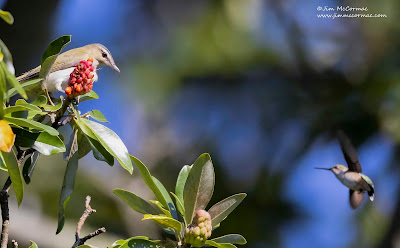 A juvenile Red-eyed Vireo (brown eyes) watches a pugnacious Ruby-throated Hummingbird (Archilochus colubris). A number of hummingbirds had staked claim to the nearby gardens and flowering plants. When they weren't trying to drive each other away, they'd occasionally fly high into the magnolia to have a go at the vireos.
The Red-eyed Vireo is a true long-haul migrant. They breed over a massive swath of eastern North America and extend into northwest Canada and the U.S., mostly using caterpillar-rich deciduous forests. The wintering grounds encompass most of the northern half of South America. Some vireos probably fly 5-6,000 miles, one way. It is fascinating, to me at least, to learn about the intimate connection migrant songbirds have with plants, and to think about the role of native plants and their fruit in helping to stoke these long, hazardous journeys.
at September 25, 2021