A showy snarl of partridge pea, Chamaecrista fasciculata, lines the sidewalk to my front door. This native member of the pea family (Fabaceae) is an annual, and easily grown. My yard - front and back - is full of native flora, as natives greatly spike the fauna, especially insects. Partridge pea is an especially interesting case of coevolutionary relationships between plants and insects. All of these images were shot in the patch of pea shown in this photo, in about a half hour. 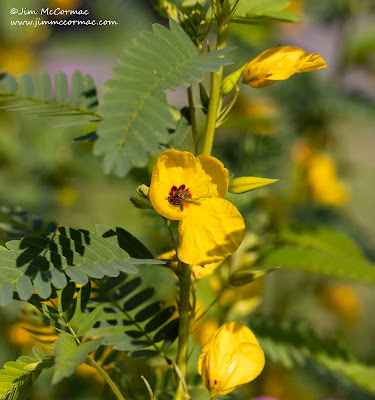 Showy yellow flowers of Partridge Pea, which arise from the leaf axils. They are magnets for certain insect pollinators. 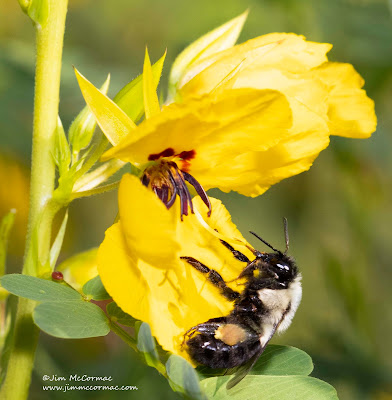 A bumble bee in the genus Bombus approaches a partridge pea flower. Bumbles are certainly the most noticeable and probably most numerous insect pollinator, at least in my flower patch. It's interesting to listen to them "buzz pollinate" the flowers by rapidly and noisily vibrating their wings to cause pollen to fall from the stamens. 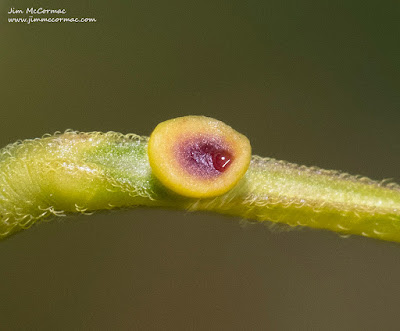 There is another less obvious and arguably more interesting way in which partridge pea lures insects into its foliage. This is an extrafloral nectary (EFN), located near the base of leaf petioles. Extrafloral nectaries are like tiny cups that constantly exude a rich sugary secretion. This substance, which is about 95% sugar, is irresistible to certain insects, especially those in the Hymenoptera (ants, bees, wasps). 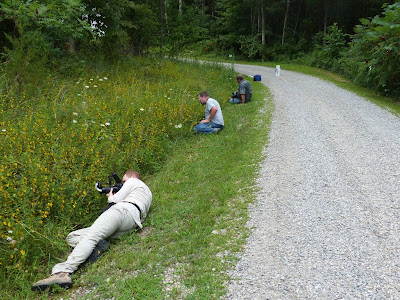 A photo from August 9, 2014, taken by Laura Hughes. From top to bottom, that's David Hughes, John Howard, and your narrator. We're carefully watching a luxuriant stand of Partridge Pea along John's driveway in Adams County, Ohio.
I had recently learned about Partridge Pea extrafloral nectaries, told Dave, John, and Laura what I had learned, and here we are trying to photograph EFN visitors. I like intellectually inquisitive people such as these :-) 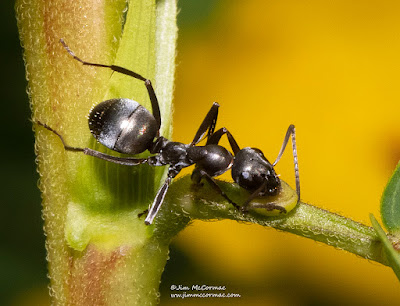 An ant (species unknown to me) drinks from an extrafloral cup. Ants may be the best known visitors of partridge pea extrafloral nectaries. But many other insects visit the sugar cups, on partridge pea and the other 2,000 or so plants in over five dozen families worldwide that have EFN. One theory is that by enticing predatory insects, as many ants and wasps are, into the foliage via extrafloral nectaries, they will discourage herbivory and flower damage by attacking insect herbivores such as caterpillars. 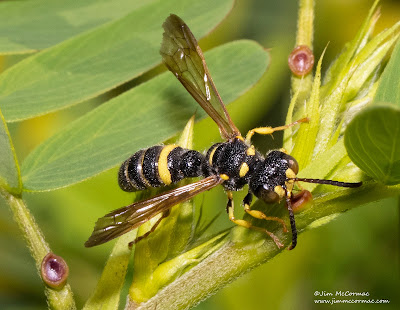 A beetle bandit (Cerceris ssp.) sips from a nectary. It is bookended by two other EFN, on adjacent leaves. Various beetles such as weevils can be major floral consumers, so perhaps beetle bandit wasps - well known to prey on weevils - pay the plant back by controlling these insects. 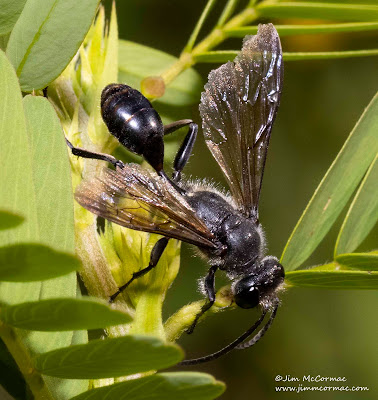 This Mexican grass-carrying wasp, Isodontia mexicana, is looking a bit tattered. Isodontid wasps are one of the more frequent visitors to my partridge peas. They prey on tree crickets and other small Orthopterans, and this group feeds on foliage. 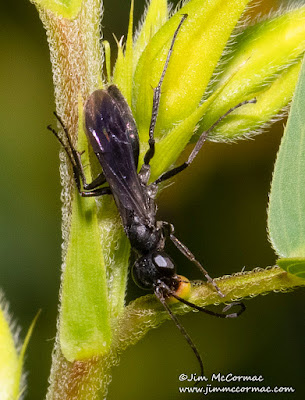 A spider wasp in the genus Auplopus stuffs its face. Many spider wasp species are high strung and edgy, habitually twitching their wings and moving about rapidly as they hunt prey. 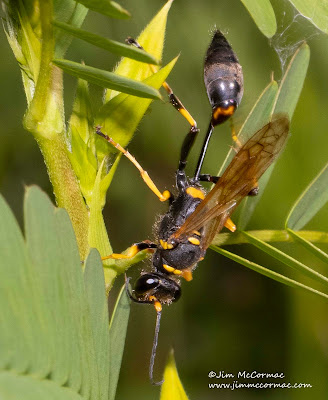 A personal favorite and a spectacular wasp, the yellow-legged mud dauber, Sceliphron caementarium. The insect is the very definition of "wasp-waisted". They make mud nests which are attached to walls, rocks or other structures. These adobe crypts are provisioned with paralyzed spiders for the wasp larvae to nosh on.

I have seen many other insect species visiting the extrafloral nectaries, and hope to spend some more time photo-documenting them. Oh, one might wonder why someone like me would wish to entice wasps and bees into close proximity to my front door and walkway. It's not a problem. These insects are non-aggressive, quite busy with their activities, and pay us no mind. In many years of sticking my camera in the faces of stinging insects, I have only been stung a few times - and those were by bald-faced hornets after apparently approaching their large paper nests a bit too close.
at July 29, 2021

Wow, Jim, this is SO interesting.
We started growing Partridge Peas last summer, and for the first time we had some sort of wasp stuffing grass in the screen tracks of our kitchen window (we don't leave the screen in that one because sometimes we want to open the window and take unimpeded photos). Same thing is happening this year, and we had no idea "who" this wasp was. So thank you for enlightening us!!
You're right about the popularity of the Partridge Peas among a slew of different pollinators. Now we're going to have to look for the extrafloral nectaries, too. What a cool thing!

Jim, that yellow-legged mud dauber photo is quite impressive!