Nature: Gray fox sightings continue to be rare in Midwest 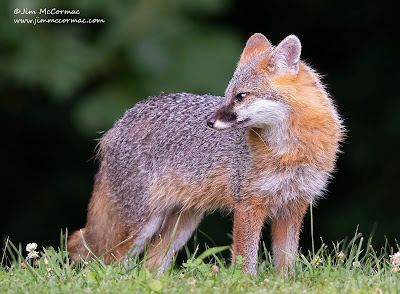 A gray fox vixen strikes a pose in Fairfield County/Jim McCormac
Nature: Gray fox sightings continue to be rare in Midwest
Columbus Dispatch
July 18, 2021
NATURE
Jim McCormac
On March 6, 2011, I wrote a column about red foxes. In conclusion, I issued a plea for fox sightings within the confines of Interstate 270. Fifty-one readers responded with reports.

If I did the same for the lesser known gray fox, the response would likely be… crickets.

While gray fox is poorly known among the general populace, it was easily the most common fox in Ohio prior to European settlement. Indeed, the well-known red fox may have been absent or rare. It is thought that reds began to colonize the Midwest from points north following the opening of the vast eastern deciduous forest.

Adaptable red foxes, which favor open and semi-open country, are now the common fox in Ohio. Heavy deforestation over much of the state reduced gray fox populations.

A big male gray fox tips the scales at 15-20 pounds. Vixens are about half that. The overall length is about three and a half feet, but one-third of that is bushy tail. Most striking is the rich parti-colored pelage. Gorgeous tones of silvery-gray, black, rufous and white form an elegant appearance. Small mammals are their principal prey but birds, large insects and even fruit and other plant matter are eaten.

Perhaps the most interesting behavioral aspect of gray foxes is their arboreal skills. It is the only member of the dog family that climbs well and does so habitually. Sometimes they will nap among the boughs, and there are rare records of dens in tree cavities – some as high as 20 feet! Most dens are ground burrows.

I have had some memorable experiences with gray foxes. Once, while working in southern Ohio’s Shawnee State Forest with a fellow botanist, a gray fox darted onto the forest road ahead of our car. It sized us up, then hotfooted it into a culvert under the road. We got out, looked into the pipe and there was the fox looking back.

Better yet was encountering an active den in the wilds of Athens County about 20 years ago. Five tiny kits, eyes barely open, tumbled and lolled at the entrance to their burrow. Suddenly they snapped to, looked at the burrow and stumbled back in. The vixen had apparently sent them a directive unheard by me.

Gray fox encounters have been rare for me in recent years. Thus, when Tom Sheley told me of a cooperative family group on his heavily wooded Fairfield County property, I begged a visit. Tom is founder and co-owner of the Wild Birds Unlimited store on Sawmill Road in Columbus, and a veteran outdoorsman. He had figured out the foxes, and was able to direct me as to how to best encounter them. I captured my first photos of this furtive species, one of which accompanies this column.

While gray foxes rebounded somewhat from massive deforestation in the 19th and early 20th centuries, they face new, poorly understood threats. The Appalachian Wildlife Research Institute (www.appalachian-wri.com) based in Athens has made the gray fox a priority project. Data shows a sharp decline over the past 25 years.

The Institute speculates that increased coyote competition and a spike in raccoon populations – raccoons transmit canine distemper - are primary ongoing factors in gray fox reductions. Further, there was a trapping run on fox in the early 1980’s due to high fur prices. Some 30,000 gray fox were harvested. The trapping run was about when coons and coyotes began to increase markedly and reduced fox populations may have been more vulnerable.

While fox recovery plans have yet to be forged, one obvious part of the equation lies in protecting large contiguous forests. Tom Sheley and wife Donna are doing their part. They recently added a sizable forested addition to their rural property, largely with fox conservation in mind.

Healthy forests should harbor gray foxes, and scores of other animal species.

Naturalist Jim McCormac writes a column for The Dispatch on the first, third and fifth Sundays of the month. He also writes about nature at www.jimmccormac.blogspot.com.
at July 19, 2021

A coworker and I spotted a large male gray fox about a month ago within the forested area surrounding Lake Rockwell in Kent. He was trotting along a grassy lane well ahead of the truck, just long enough for us to confirm his identity before he darted into some brush. Most certainly a gray fox, not a red fox or coyote. There are plenty of raccoon and coyote in those woods, as well, so I fear he's got some competition!