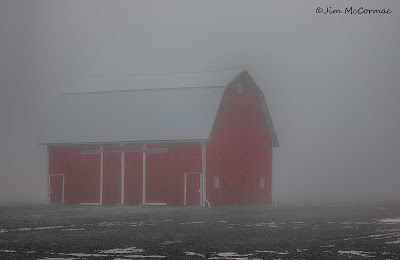 The white roof of a barn melds into pea soup fog so thick you could, as they say, cut it with a knife. The structure sits only 50 feet or so off the rural lane from which I made the photo. Wyandot County, Ohio.

I arose on Christmas Eve day with a yen to shoot short-eared owls. Dense fog blanketed the earth's upper crust, where we humans mostly reside, and that's an atmospheric condition not suitable for photographing owls on the wing, nor most other birds. However, fog in these parts nearly always burns off by mid-morning or so, and with that expectation I left for points north in late morning.

As I headed north along the Scioto River towards Big Island and vicinity, the fog thickened. As the day wore on, its density only increased and at times it made for somewhat risky driving, especially at rural intersections as visibility was greatly reduced.

In short, the fog never did dissipate, skewering owl and other bird photography. On the plus side, I know how and where to find owls and other birds. So those opportunities will arise again. But coastal New England-type fog such as this is a relative rarity here. Thus, it was a grand opportunity to explore the fogscape for interesting targets. As an added bonus, the dense cloaking mist and pre-Xmas prep kept most people inside and I had this little part of the planet nearly to myself. 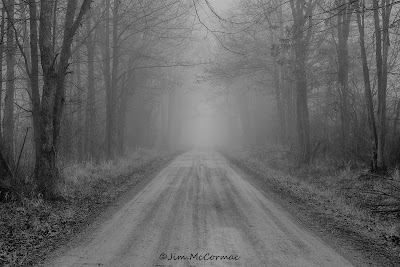 This wooded rural lane stopped me in my tracks. Dense fog created an aura of eerie mystery to this landscape; irresistible for photography. 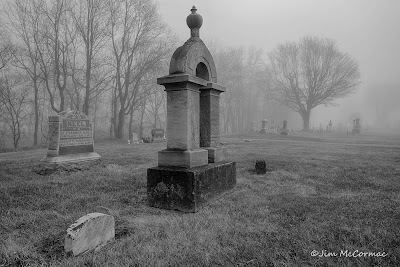 Cemeteries lend themselves to fog, and I kept my eyes open for opportunities. This is Thompson Township Cemetery along the banks of the Scioto River in northern Delaware County. 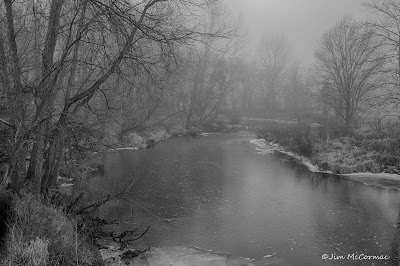 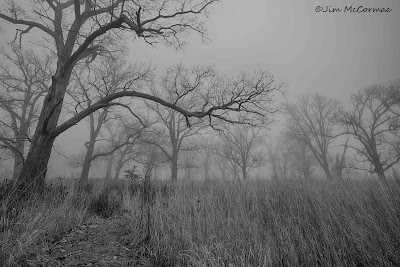 This is Daughmer Savanna in Crawford County, perhaps Ohio's best remaining example of an imperiled habitat, the prairie savanna. These massive bur oaks are fire-resistant and impervious to the frequent blazes that swept the prairie. Daughmer is within the former 200,000 acre Sandusky Plains, a vast prairie that once covered parts of Crawford, Hardin, Marion, and Wyandot counties. Only a fraction of a percent of this former prairie survives. Daughmer is managed by the Crawford Park District and open to the public. The savanna looks good at any time, but the fog created a spectacular moodiness to the site that I'll probably not see again anytime soon.

PHOTOGRAPHIC NOTE: With the exception of the barn photo, I chose to render these images in black and white. Tinges of color take away from the eerie moodiness of fog and the largely black and white world that it creates, in my opinion. I did not shoot these scenes using in-camera black and white settings, though. I never do, as it takes away future options. The images were converted to black and white using the NIK Collection's Silver Effex Pro 2 editing software. It works wonderfully for black and white conversion, and with the original files in color, I can later work with color files should I ever see the need.

Email ThisBlogThis!Share to TwitterShare to FacebookShare to Pinterest
Labels: fog