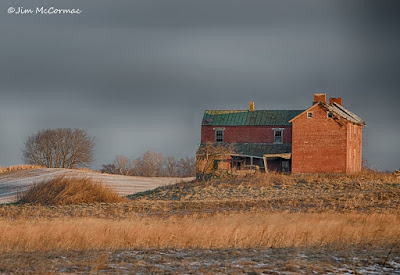 A long abandoned farmstead haunts the Pickaway Plains, a former swath of prairie that covered parts of Pickaway and Ross counties in central Ohio. A meeting today took me to southern Ohio's Adams County, which meant driving right by this place. I couldn't resist a stop in the early morning light for photos. And a quick drive through of the adjoining 1,000 acre conservation reserve program grassland. Didn't see much in the morning due to limited time, but I'd stop by here again on my way home, in late afternoon. 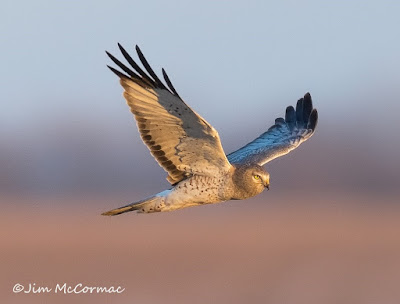 The afternoon visit was much more productive for birds. At least four northern harriers, like the male above, were hunting the grasslands. Harriers are often quite wary of people, and will veer off before getting into effective camera range. This one gave me one pass and I tried to make the most of it.

An immature bald eagle flew overhead, and a lone light-morph rough-legged hawk worked the grasslands. It was later harassed by a peregrine falcon that seemingly materialized out of nowhere. Am American kestrel or two perched on wires, and I saw at least thirty ring-necked pheasants. They reproduce well at this site and are quite wary. It was a productive hour or so, but by the time I left at dusk the mercury was plunging into the high teens.

A reminder: If you want to take lots of birds photos and learn lots of techniques, Debbie DiCarlo and I are leading a trip to a MUCH warmer place: South Florida in late February. A good time to escape frigid northern climes. All the details are RIGHT HERE.