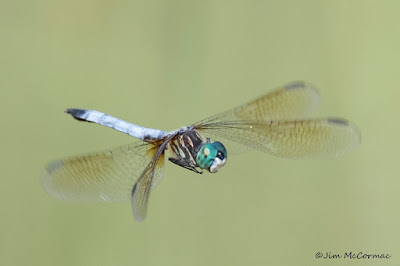 NOTE: I'm just getting around to posting this article on the blog, and sorry for not doing so on the heels of its publication in the Columbus Dispatch. Two events that you may be interested in related to the subject at hand:

1) Dragonfly Workshop, April 26 at Grange Audubon Nature Center in Columbus. A primer for the upcoming 2018 survey season for the Ohio Dragonfly Survey. Several interesting talks are scheduled. I'll be giving one that focuses on dragon/damselfly photography. CLICK HERE for details and scroll down to this event.

2) Odo-Con-18! The annual statewide dragonfly conference, hosted by the Ohio Odonata Society and the Ohio Dragonfly Survey. It promises to be a doozy, with great talks and field trips. Findlay, Ohio, June 22-24, all details RIGHT HERE.

OK, read on for the Dispatch article...


Dragonflies and their brethren, damselflies, are among our most interesting insects.
The class Insecta, which includes all our “bugs,” is remarkably large and diverse. The overwhelming majority of animals belong to this group, including beetles, bees, wasps, flies, butterflies, moths — anything with six legs.
Insects in the order Odonata, which includes dragonflies and damselflies, stand out from the crowd. These creatures are often highly visible and artistically colored and incredible aeronauts. Furthermore, they are high-end predators, snatching lesser insects from the air or foliage and gobbling them up.
Damsels and dragons are a highly effective part of the food chain because of their hunting prowess. They play a big role in keeping mosquitoes and myriad other insect populations in check. Because the larvae of dragonflies and damselflies are completely aquatic, this group serves as an important, easily monitored, barometer of water quality.
Because of the enchanting beauty of these insects, it’s small wonder that people have increasingly turned their eyes and binoculars to the damsels and dragons. This spike in interest has spawned a large series of field guides. Now, it’s easier than ever to put a name to an interesting odonate.
The year 2002 was important in the annals of Ohio dragonfly literature. The Ohio Biological Survey released “The Dragonflies and Damselflies of Ohio,” authored by Robert Glotzhober and David McShaffrey. The 364-page book is a must for dragonfly-watchers.
Also issued that year was “Dragonflies and Damselflies of Northeast Ohio,” published by the Cleveland Museum of Natural History. Author Larry Rosche and colleagues assembled an outstanding, user-friendly guidebook that, although parochial in title, is useful statewide. It has been updated since.
In 2007, the Ohio Division of Wildlife produced a popular booklet titled Dragonflies and Damselflies of Ohio. It covers all the common species that one is likely to encounter, coupled with color photos and useful natural-history information. Copies can be obtained, free, from the Division of Wildlife (1-800-WILDLIFE).

These publications and other work served to provide excellent baseline information on the 167 species of damselflies and dragonflies that have been documented in Ohio. They are informational steppingstones that led to the latest dragon-slaying project: the Ohio Dragonfly Survey.
Funded by the Division of Wildlife, the survey is an ambitious three-year effort to observe dragons and damsels statewide. The project is directed by entomologist MaLisa Spring and operations are housed at Ohio State University. Last year’s inaugural survey season generated more than 10,000 records, and the next two seasons should produce additional data.
The survey depends upon legions of volunteers of all skill levels, and the more helpers the more dragons and damsels will be tallied. We want to make this the most comprehensive survey of its kind.
On April 26, a program discussing the survey will take place at the Grange Insurance Audubon Center, 505 W. Whittier St. The program will begin at 6:30 p.m. and feature talks on dragonfly identification, habitats, survey techniques, photography and more. It’s free, but registration is required by emailing MaLisa Spring at spring.99@osu.edu
For additional information about the dragonfly survey and upcoming events, visit: https://u.osu.edu/ohioodonatasurvey.
Naturalist Jim McCormac writes a column for The Dispatch on the first, third and fifth Sundays of the month. He also writes about nature at www.jimmccormac.blogspot.com.

Dragonflies are of the most interesting and beautiful insects in my opinion! So very happy to hear that Ohio has a survey in the works and is making great strides in the study of these insects and their biodiversity. Thanks for sharing!