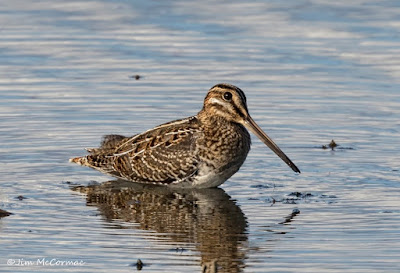 For more than 170 years, people have been duped into “snipe hunting.” A rite of passage for campers and scouts, the mark is led into darkened woods and instructed to remain motionless while holding an open bag. The “snipe” will eventually enter the bag.

Descriptions of the mythical snipe vary but usually involve fantastical creatures, such as a cross between a hare and a squirrel. These have nothing on the real thing.

The Wilson’s snipe is a bona-fide bird that transcends the imagination of snipe-hunting pranksters. A type of sandpiper, the snipe is notable for its Pinocchio-like bill, an appendage that seems to stretch half the length of the body.

Disproportionately huge eyes stare from a striped head, and the snipe’s body is elaborately decorated in ornate vermiculation and cross-hatching. The overall color scheme is browns of varying tones. Camouflaged coloration helps the snipe blend with the grasses and sedges of the wetlands it frequents. If flushed, the snipe rockets off at great speed, zigging and zagging while emitting low rough “Scape! Scape!” calls.

The snipe has long been hunted but is hard to hit; bringing down a fleeing bird takes a crack marksman. Successful gunners were dubbed “snipers,” and that’s the origin of the term sniper for ace marksmen.

Snipes are normally shy and retiring, but the need to procreate brings males out of their shells. Commencing in early spring, males begin an aerial courtship display that must be seen to be believed.

The usually ground-bound male takes wing and climbs so high that he appears to be a speck. Imbued with the euphoria that must come with being able to shoot hundreds of feet into the air, the snipe begins to “sing.” With its tail.

To sing with the wind, the courting snipe whips into shallow dives while flaring its tail. Air distorted by the tail feathers creates an eerie, ethereal winnowing sound like the distant quaver of an amplified musical saw. Smitten with his bizarre sound-making ability, a singing snipe might remain aloft for a half-hour.
Although Wilson’s snipe is one of North America’s most abundant shorebirds, most Ohioans have probably never seen one. Scores pass through in migration, headed to northern nesting grounds, but breeders are very rare here. Most nesting records come from the northern tier of counties.

Thus, while making an Earth Day foray to Glacier Ridge Metro Park, I was pleased to discover two territorial snipes sky-singing over a large wet meadow. I had seen courting snipes here in April 2017, and I suspect that they might nest in the park.

Prior to John Deere’s 1837 launch of his steel plow, Ohio hosted about 5 million acres of wetlands. It didn’t take people long to figure out that wetland soils grew great crops, and Deere’s device offered a way to transform the wetlands into America’s breadbasket.

Today, only about 10 percent of Ohio’s wetlands remain, most of them converted to an alien triumvirate of beans, corn and wheat. Wetland dwellers that probably were historically common Ohio breeders, such as the snipe, suffered accordingly. Glacier Ridge is a green oasis surrounded by crop fields and the ever-encroaching sprawl of suburbia. Thanks to Metro Parks for saving a piece of our wetland past, and the snipes that come with it.