I spent much of yesterday at a place that I've often written about - Cedar Bog, the legendary natural area in Champaign County, Ohio. While I often visit for photographic purposes, yesterday was "work". At the request of Erika Galentin of the Herbal Academy, I was there to help with production of a video about pollinators, along with videographer Ryan Gebura. We spent five hours covering a mile of boardwalk, finding many interesting things along the way and frequently pausing to film narrated vignettes of some aspect of flora and fauna. I do not envy Ryan has task of having to distill all of that material into an hour video!

One of the cool things we stumbled into was a Triangle-bearing Orbweaver, Verrucosa arenata. These charismatic little spiders are quite showy in certain lights and angles; in others, they are a mimic of something quite unpalatable, as we shall see. 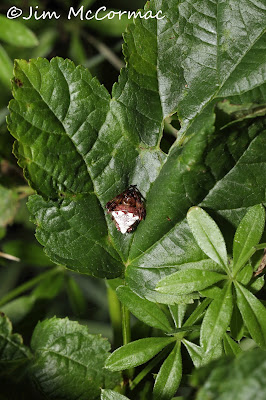 I saw this splotch on a ninebark leaf some ways down the trail, and from afar it looked astonishingly like a bird dropping. Being somewhat wise to the vast pool of organisms that excel in looking like avian expulsions, I investigated more closely. 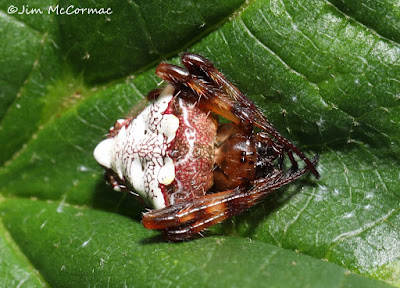 And sure enough, no Blue Jay offal here - it was a huddled Triangle-bearing Orbweaver, hiding in plain sight. The animal's upper abdominal surface is shiny white, as if it was glazed with ceramic. The mixture of pale and dark pigments, coupled with the spider's habit of scrunching into a compact ball, creates an astonishingly good likeness of bird scat, at least at first glance. Why look like a bird dropping? Because, apparently few predators have any interest in such fare, so wearing a fecal disguise allows one to escape the notice of those that might otherwise do harm. 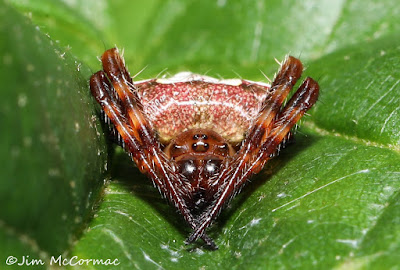 I wanted to gaze into the little spider's eight eyes, and here they are. I love the repeating patterns of triangular geometry in this beast. At least when in repose, nearly every view from any angle produces triangles.

This spider was just one of a great many interesting animals that we found on this day, and most cooperated well enough that Ryan was able to film them, often while I narrated. Although the spider is not a pollinator, we talked much about the web of life that develops around high quality floristically diverse habitats. Lots of flowers draw lots of pollinators. Lots of pollinators attract lots of predators, such as this spider. And up the food chain it goes, with much of this life sparked by flowers and their need to lure pollinators.

We had a trashline orb weaver establish a lair between the hangers of a hanging pot some weeks ago. She is so well disguised as her victims, which she hides out on, that you can't even see her unless she moves. Pretty cool!