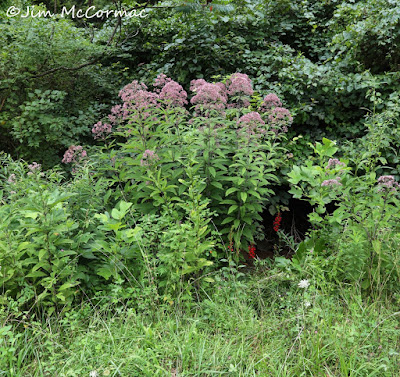 A massive clump of Hollow-stemmed Joe-pye, Eutrochium fistulosum (nee Eupatorium), bursts forth from the moist soil along a small creek in Shawnee State Forest. Some Cardinal-flowers, Lobelia cardinalis, glow like beacons in the shadows. The joe-pyes often attract commentary from botanists and non-botanists alike, due to their stature. The species above can tower 10 feet or more in height.

There are three species of joe-pye in Ohio: the one above, the similar Purple Joe-pye, E. purpureum, and the much shorter flat-topped Spotted Joe-pye, E. maculatum. The latter is largely restricted to high quality wetlands and is the least likely to be encountered. The other two are the conspicuous giants of moist woodland borders, bottomlands, low-lying ditches and thickets, etc. Purple Joe-pye has the broadest distribution, having been recorded in the majority of Ohio's 88 counties. Hollow-stemmed Joe-pye is largely restricted to the eastern half of the state. All of them are botanical goldmines to butterflies, especially swallowtails.

As to the curious name "Joe-pye", the following is cited directly from Mother Earth Living's website: "The origin of the common name is uncertain. The most prevalent theory holds that it refers to a Colonial-era Native American named Joe Pye, who is said to have used one of the species to cure typhus. Another is that Joe Pye was a nineteenth-century white “Indian theme promoter” who used the root of one of the species to induce sweating in cases of typhus. The earliest use of this name dates to 1810–1820." 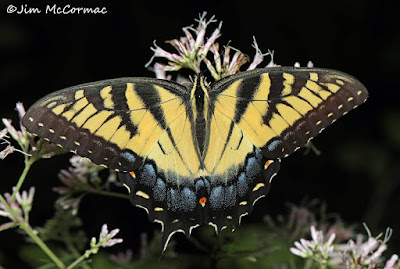 Eastern Tiger Swallowtails, Papilio glaucus, are especially fond of joe-pye. If you want to see lots of swallowtails, just park yourself by a luxuriant patch of joe-pye and watch the parade. I spent the day on August 7 in Shawnee, where joe-pye abounds, and did just that. I had a good time shooting butterflies as they came and went, especially the flashy tigers. The one above is a female, sporting her tell-tale blue crescent.

Photo Tip: To get a black background, as above and in the last photo, use flash. Make sure that any background objects are far behind, and use a small aperture. The background should dissolve into an inky darkness, which often serves to focus complete attention on your subject. This photo was made with the Canon 5D IV and 100mm f/2.8L macro lens, at f/11, ISO 200, 1/200 with flash from a diffused Canon 600 II speedlite. 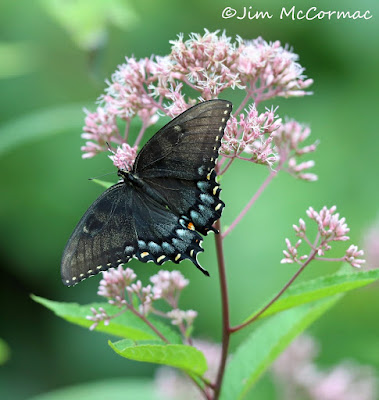 Although the animal above looks quite different than the preceding female Eastern Tiger Swallowtail, it is the same. In areas where Pipevine Swallowtails occur, many if not nearly all female tigers will be of this dark morph. The theory is that the tigers are exploiting the appearance of the Pipevine Swallowtails. The latter species is distasteful due to its sequestration of toxic aristolochic acids derived from its pipevine plant hosts that are eaten by the caterpillars. Visual trickery such as this - an apparently non-toxic animal attempting to mimic the look of a toxic species - is known as Batesian Mimicry. Presumably birds quickly learn to shun distasteful Pipevine Swallowtails, and may avoid anything that looks similar. In Shawnee State Forest, there are plenty of both yellow and dark forms of Eastern Tiger Swallowtails.

By point of photographic comparison with the other butterfly shots, this one was made without flash. Thus, the background is far more obvious, at least in its natural colors. I also used a 500mm telephoto on a tripod, which allowed me to remain some distance away. The aperture was set to f/4.5, which largely blurred the background out. 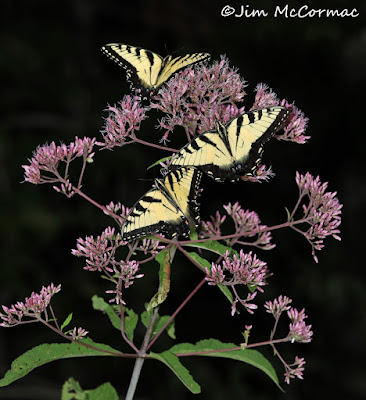 A trio of stunning male Eastern Tiger Swallowtails jockey for position on a favored joe-pye. Competition for the flowers can be extreme at times, with butterflies bumping and shoving for space. Large bumblebees in the genus Bombus enter the fray, too, and I've often seen them run off the big swallowtails. In fact, the day I made these photos, I watched a bumblebee essentially attack a tiger swallowtail and the two eventually spiraled to the ground, the bumblebee apparently trying to sting the butterfly. The pair flopped about on the ground for a bit, before the butterfly shook itself free and fluttered off, apparently unharmed.

The photo above was made with the aforementioned Canon 5D IV, but this time coupled to Canon's amazing 200mm f/2 lens. Flash came from the 600 speedlite, but this time I went into high-speed sync mode with the camera's shutter speed set to 1/250. This mutes the light intensity, providing softer fill light. ISO was at 250, and aperture was f/10. Mostly, it was just a matter of waiting for the butterflies to arrange themselves in a pleasing matter, but when there's lots of joe-pye around one often doesn't have to wait long for excellent photo ops.