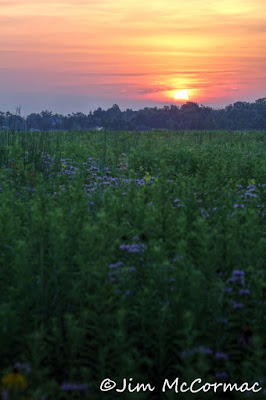 Sunrise over Huffman Prairie, as seen last Friday. This 100(ish) acre prairie patch is located at the south end of Wright-Patterson Air Force Base near Dayton, Ohio.

Dave Nolin, recently retired Director of Conservation for Five Rivers Metroparks, sent me a few photos of the prairie last week. It looked so spectacular, just nearing peak bloom, that I couldn't wait to go see it in person. So, I took Friday off and was there before daybreak. So amazing was the place that I went back for an encore on Sunday morning. Some photos from these excursions follow. 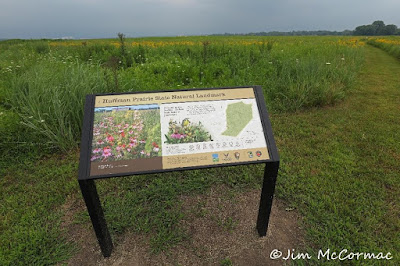 Major kudos go to the management of the giant air force base for their support of Huffman Prairie, which sits on their property. Double kudos to Dave Nolin, who spent the better part of three decades working with the base to provide the best possible management for the prairie. All that long hard work is bearing major fruit today, as we shall see. Even though Dave has left the helm at Five Rivers Metroparks, the staff there continues with the fine work. 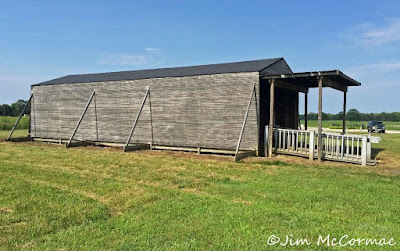 On the prairie's south edge sits this replica of the Wright Brother's original hangar - yes, those Wrights, Orville and Wilbur! This is the site where they researched and improved their aircraft, and where many early test flights took place. By 1910, a mere seven years after their inaugural flight at Kitty Hawk, North Carolina, they had founded the Wright Flying School at Huffman Field. Today, flying machines representing the current pinnacle of aviation routinely fly the skies over the huge air force base just north of this hangar. 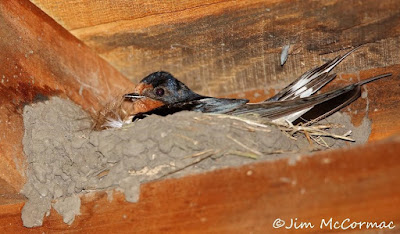 In a delicious irony, Barn Swallows fill the Wright Brothers hangar with their nests instead of artificial flying machines. These feathered speedsters are incredible aeronauts, and one might argue that no manmade flying machine can rival their flight skills. 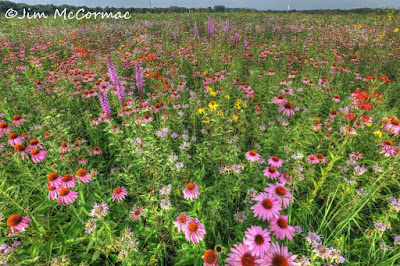 Now, I'm sure, you'll understand why I was in a hurry to get there! A sea of coneflowers, catchfly, blazing-stars and scores of other prairie plants create a fantastic palette of color. 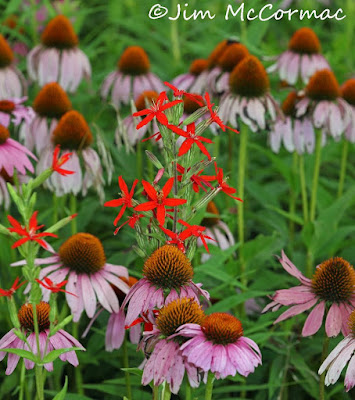 Standing out like crimson beacons is the Royal Catchfly, Silene regia, this one embedded in a cushion of Purple Coneflower, Echinacea purpurea. The catchfly is a pure prairie plant, and never have I seen so much of it in one locale. 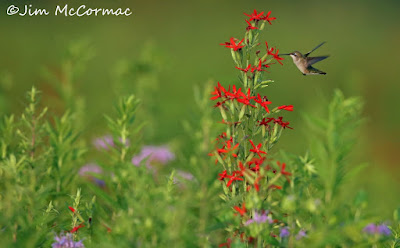 To Ruby-throated Hummingbirds, Royal Catchfly is irresistible. If there are any hummers about, you can be sure that sooner than later the catchfly's brilliant blossoms will draw them over. On Friday, I guesstimated (an accurate estimate is probably impossible) that at least 100 hummingbirds were present, and likely far more than that. At times, I would see 6 or 8 birds from one spot, and that's a big prairie with scads of catchfly. 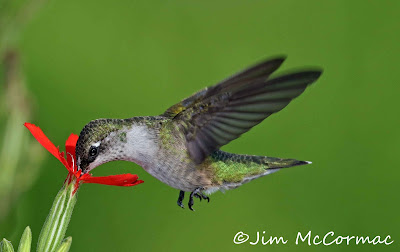 A female hummingbird dips deep into the flower's corolla, seeking nectar rewards. The catchfly has coevolved with long-billed hummingbirds. The flowers do not have stiff petals (landing pads) and thus the core of the flower is inaccessible to many insects, other than swallowtail butterflies. Furthermore, the sticky gluelike calyx (the green and white striped tube below the flower) prevents access to climbing insects. But these little feathered helicopters have no difficulty at all in dealing with catchfly flowers, and work them speedily and efficiently. The birds are probably their most important pollinators. 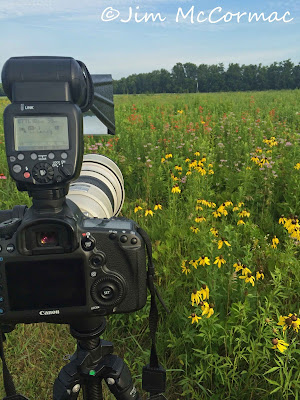 A camera's eye view of the prairie. I picked a prime spot with many catchfly plants in fairly close proximity, including several "signal tower" plants - catchflys that were much taller than most of the surrounding vegetation and thus great lures to feeding hummers. The flash rig atop the camera allowed me to send soft fill flash out to about 50-60 feet, giving me a good radius to work in.

Once I had my spot picked, I just stayed there. Five hours on Friday, and about four hours on Sunday. Obtaining crisp photos of feeding hummingbirds is no easy task. I find it is best to stay quietly in one spot, and let them come to me. Which they did, on a regular basis. About a dozen times, a nearby hummingbird would suddenly take notice of me and the camera, shoot about ten feet straight up in the air and move closer, and hover for a few seconds obviously checking me out. About half the time, they'd decide they didn't like the large invader and shoot off to some more distant flowers. The other times, they'd seemingly decide I was OK and drop right back down and commence feeding.

I have little problem remaining immobile for long periods when the surrounding environment is as interesting as this prairie. A Blue Grosbeak made the rounds, serenading me with its forceful finchy warble. Two local Common Yellowthroat males routinely delivered their fabulous aerial flight songs at close range. Bobolinks occasionally darted overhead, issuing their pleasing musical pink! pink! call notes. Young Eastern Cottontails nibbled on succulents just down the path. Giant Swallowtails coursed by, and one female paused nearby to deposit eggs on a wafer-ash. And on went the wildlife parade, nonstop. Plus, it was a great opportunity to observe the habits of the hummingbirds. They are easily among our most feisty animals, and if a Ruby-throated Hummingbird was the size of a swan, we'd be in serious trouble. Were they that big, I'm sure I would have been impaled and tossed aside for my transgressions into their turf. As often as not, a hummer would just have set up perfectly for a photo, when another would whir by and the fight would be on! The birds would chase one other at top speed across the prairie, sometimes shooting high into the sky. At one point, an American Robin had the temerity to attempt to wing over the prairie, and a hummingbird (outmassed by 25 times by the comparatively huge thrush) immediately launched skyward and sent it packing. 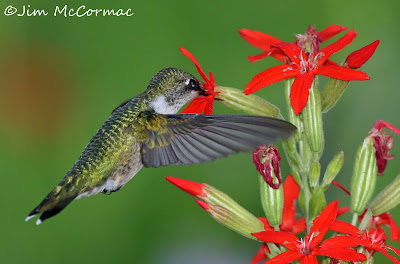 From a photography perspective, trying to capture hummingbird photos is fun and challenging. The birds are often rather unpredictable, and usually don't remain at any given flower for more than a few seconds. One must learn to be fast on the trigger and smooth and accurate in tracking the fast-moving quarry. When all goes reasonably well, photos such as this one can result. I FAR prefer shooting the birds on native wildflowers than feeders, too. 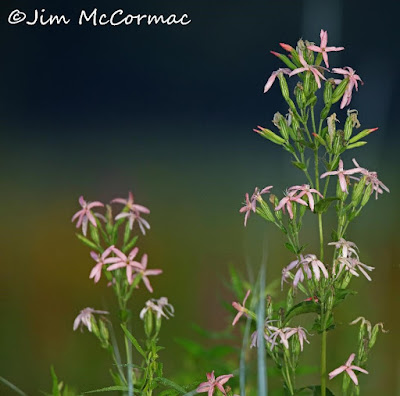 Interspersed with the typical catchfly plants were a number of specimens of this variant, a salmon-colored form. This is a decidedly rare type, and I've only seen it in a handful of spots, and always in very low numbers. One of the reasons that I picked the stakeout spot that I did was because an exceptionally large and striking salmon plant was within close distance (the plant in the photo). To capture a hummingbird nectaring at one of these flowers would be exceptional, probably the best trophy photo one could get in this place. So, I kept an exceptionally close watch for hummers moving in on the salmon catchfly. 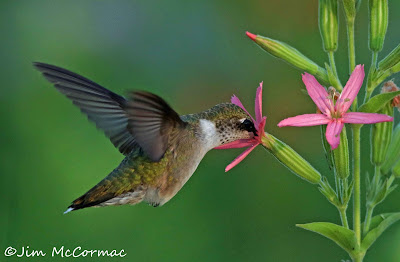 Yes! After several hummer visits to the salmon catchfly and an equal number of missed photo opportunities, I finally managed this one image. While not technically my best effort, the photo is OK and can (and will) be improved upon later. The image above is a quick edit of the jpeg. I shot this with my Canon 5DS-R, and the RAW file of this shot is about 70 megabytes and that allows for some wonderful tweaking of imperfections.

If you get the opportunity to visit Huffman Prairie in the next week or two, do it. The prairie will still be looking magnificent, and you're sure to see plenty of hummingbirds and other critters.

Thank you for sharing!

Thanks for a great post Jim, your pictures are jaw-droppers! There is plenty of thanks to go around on the restoration out there. Special kudos go to Mary "Queen of the Prairie" Klunk, Ron and Liz Cramer, Terri Lucas, and Base Natural Resources Manager Darryn Warner.

Thanks for the info on the pink/salmon variant. I have some but could not find any info on it.