A trip through Boch Hollow 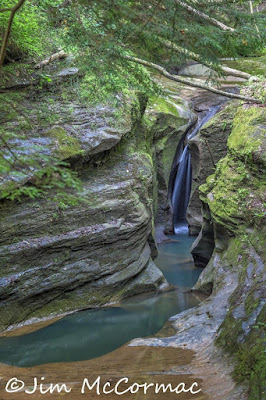 A stunning piece of scenery, even by Hocking Hills standards. I'd had a visit to Boch Hollow State Nature Preserve on the to-do list for a long time, and finally, last Saturday, the trip materialized. Boch is at the extreme northern edge of the Hocking Hills, in northern Hocking County, and it's a relatively recent acquisition by the Ohio Division of Natural Areas and Preserves, or at least parts of it are.

Boch Hollow encompasses about 570 acres, and all of it is interesting, but the scenic crown jewel is the gorge above. PLEASE NOTE: This section of the preserve is permit only. A permit is available through the Division of Natural Areas and Preserves. I'd long known of the magical falls in these first two photos, and this was my main photographic quarry on this mission. I was there soon after sunrise, and made a series of images before moving into the larger, publicly accessible part of the preserve. 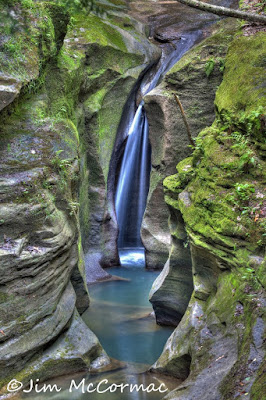 A tighter view of the mini box canyon, which is now known as Robinson Falls. Looks can be deceiving. While the narrowness of the chasm gives the illusion of depth, it's probably only 10-12 feet from the water to that log in the upper right corner of the photo. No matter, the rock and water still create a stunning palette of shapes and colors. I was fortunate in that there had been a good shower within a day of my visit, and a decent volume of water was flowing over the falls. Nonetheless, I hope to return in April at time when the water volume is greater. 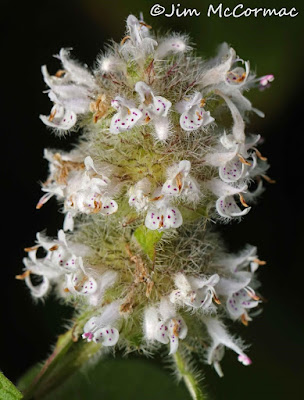 After the falls shoot, I hopped in the car and drove around to the main parking lot. After some deliberation, I decided to travel light and hunt mostly SMALL THINGS. So on went the 100mm macro lens, and off I went. Hairy Wood Mint, Blephilia hirsuta, was frequent along the main trail, sometimes forming sizable patches. 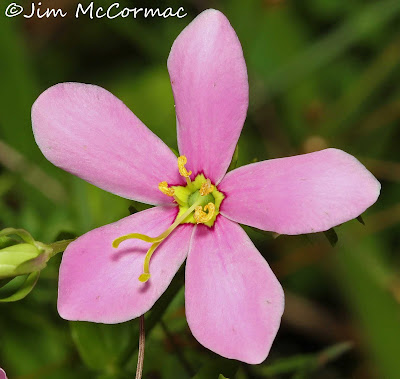 Scarcer but as conspicuous as any flower out there was the Rose-pink Gentian, Sabatia angularis. The caterpillars of a beautiful moth, the Short-lined Chocolate, are known to feed on the gentian's foliage. 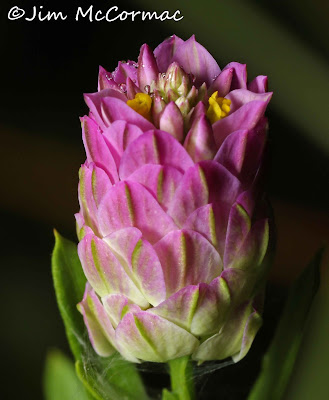 While you might not know it from this photo, Field Milkwort, Polygala sanguinea, is rather easy to miss. It is often elfin in stature, and grows intermixed with more overpowering plants. The rose-colored "shingles" are actually bracts (modified leaves); the true flowers are the tiny yellow structures at the summit. 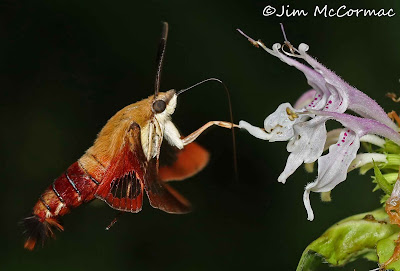 Hummingbird moths are sphinx moths, and active during the day. Photographing them is a bit tricky, but generally not nearly as tough as shooting real hummingbirds. The moths are pretty consistent in their foraging patterns, and the photographer can pretty well predict their movements and be ready. Then it is just a matter of knowing how to use your camera effectively. 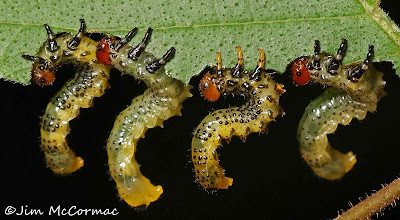 A quartet of Elm Argid Sawflies, Arge scapularis, dangle rather artistically from a leaf. When threatened, they and other sawflies adopt this curious S-shaped posture, for reasons unknown to me. While they resemble caterpillars, sawflies are actually the larvae of a type of wasp - quite unrelated to moths and butterflies, which produce true caterpillars. 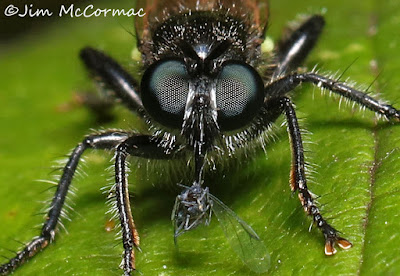 Ferocious, but fortunately on a wee scale. This is a robberfly known as Laphria canis (one of the species within this complex. Thanks Benjamin Coulter for the ID expertise). Note the withered husk of a tiny fly dangling from the robberfly's proboscis. Tip to the reincarnation crowd: Don't come back as an insect. You're liable to meet your end at the hand of something like this. 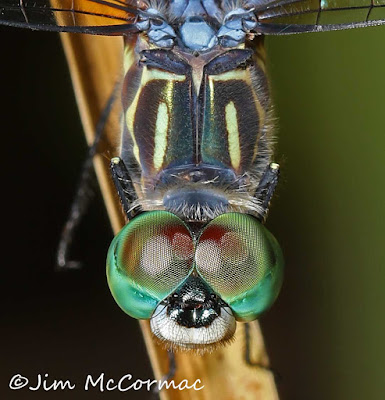 A ways up the main trail from the parking lot is a small pond. Even though it isn't large, the pond was loaded with life and I spent some time there attempting to create images of the creatures around it. One of the most common dragonflies was the Blue Dasher, Pachydiplax longipennis, which is always a favorite photo subject. 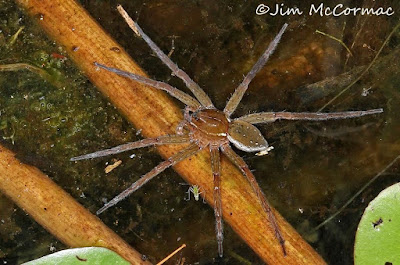 I spotted this mammoth Six-spotted Fishing Spider, Dolomedes triton, hunting along the edges of some cattails. Small Eastern Amberwing dragonflies, which usually skim low over the water's surface, came dangerously close to the spider on occasion. When they did, the spider would come to life with a lightning fast leap in their direction. Alas for the spider, it never got one. I was hoping it would, as what a shot that would make and I was ready for it. 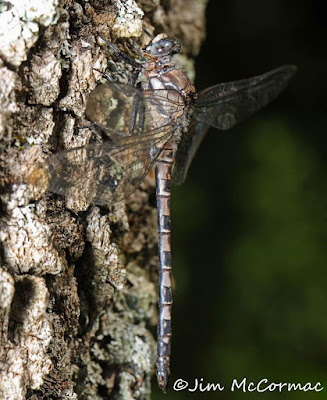 A huge bonus was this Gray Petaltail, Tachopteryx thoreyi. These huge dragonflies are never common, and occur around damp marshy seeps in wooded habitats. Typically perching posture is as seen - head up on the side of a tree trunk. But they are noted for their propensity to land on people, and sure enough, at one point it did dart out and land on my arm. They mean no harm, and aren't threatening - we just make good perches.

All too soon, it was noon and the temperatures on this incredibly steamy, muggy day had already reached the 90's and it was time to pack it in for the day. Not a bad assemblage of biodiversity for a morning's ramble, though.