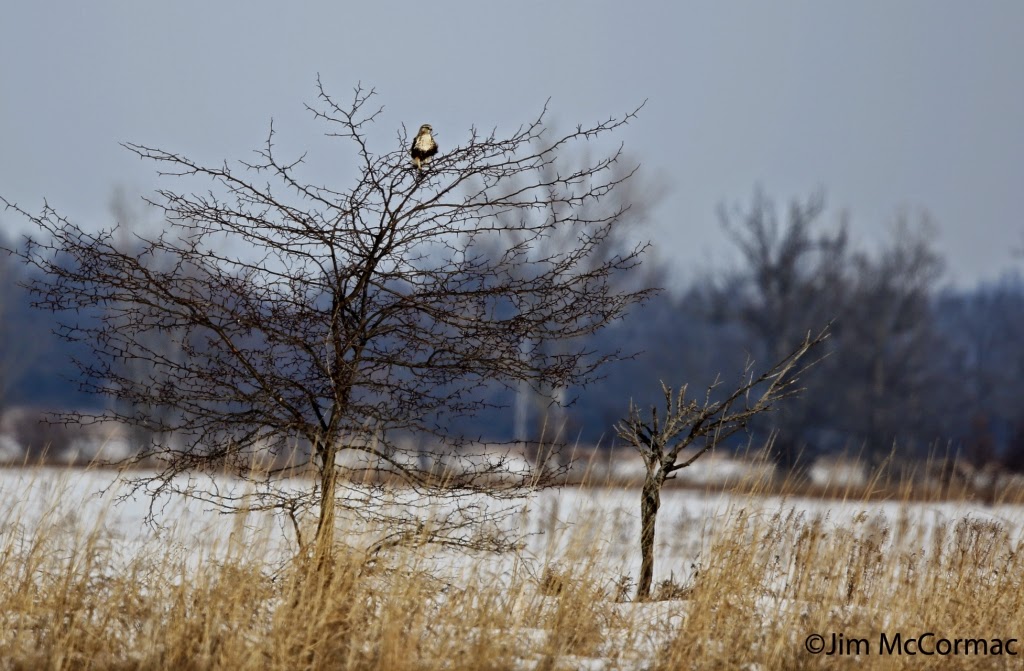 Teed up like an angel ornament crowning a Christmas tree, a Rough-legged Hawk surveys its surroundings from atop a scraggly locust at Killdeer Plains Wildlife Area in Wyandot County. Students of raptors soon learn of this hawk's propensity for perching at the very tip of whatever surveillance point the hawk chooses, often mounting impossibly small twigs. Such perching behavior can give the observer a strong idea as to what species is involved, long before any field marks can be seen. Years ago, I had a new birder in my car, and as we drove through the wintry Ohio landscape, I espied a raptor perched on the extreme uppermost branches of a large oak in the middle of an otherwise barren field. "Rough-legged Hawk!" I proclaimed, even though the bird was very far off and just an undefined speck. She was stunned, and demanded to know how I could possibly be sure of its identity. I launched into an utterly - but unbeknownst to her - fanciful description of how the legs were feathered to the feet, the small bill and delicate facial features, blah blah blah. By now she thinks I must have Superman vision, and soon we were close enough to the bird to stop and and admire it through our optics. Sure, enough, light morph Rough-legged Hawk.

I was just playing the odds in order to have some fun, relying on the treetop perching habits of this beautiful raptor to prove me right. As we admired the stunning raptor, I of course came clean and divulged why my guess was what it was. And why such knowledge can make for a good party trick when with newer birders. 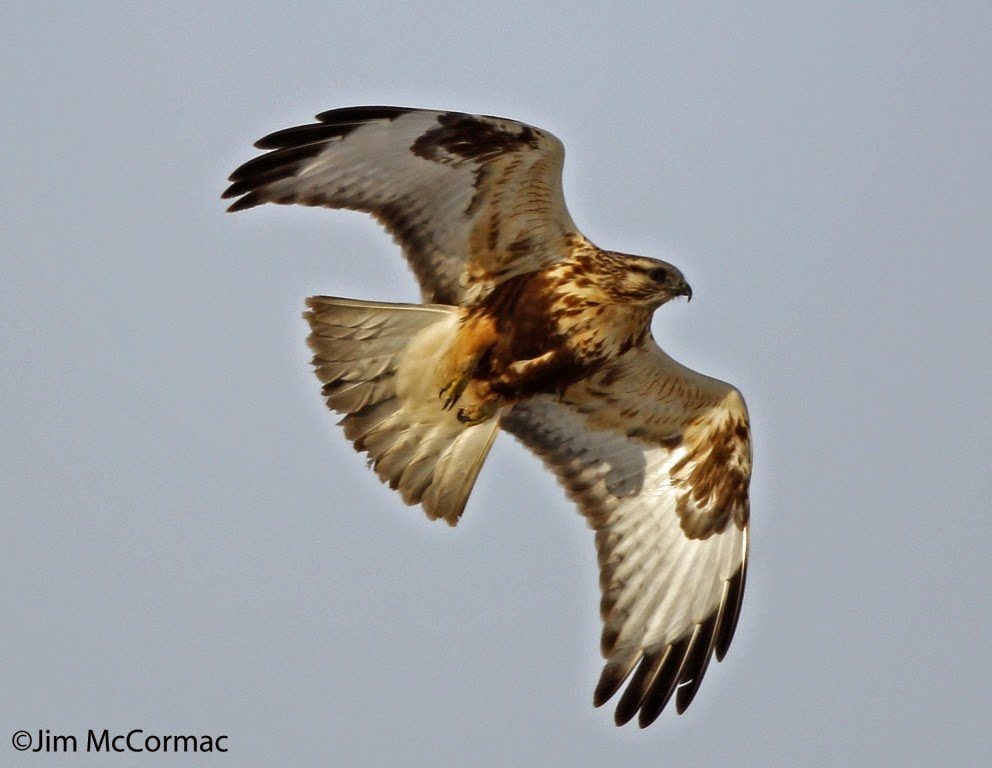 A closer view of a Rough-legged Hawk in flight, as seen yesterday at Big Island Wildlife Area in Marion County. A stunning bird indeed, with a complex pattern of white, black, and brown. In addition to their habit of treetop perching, Rough-leggeds excel at "wind-kiting": facing into the wind and hovering in place for sometimes extensive periods. They do this when prey is seen below. A favored food is meadow voles, and these little rodents often dash in and out of the snow or grass clumps. The raptor remains tethered overhead, as if attached to a string, awaiting an opportunity to pounce.

The bird in this photo is a light morph individual. There is also a striking dark morph of the Rough-legged Hawk that is mostly black. The color forms of Rough-legged Hawks - and other animals with distinct morphs such as Snow Geese - are often mistakenly referred to as "phases", as in "Did you see that beautiful dark phase Rough-legged Hawk?". Sorry to mount a nerdish, mildly pedantic soap box, but such forms are decidedly not phases and shouldn't be referred to as such. A phase is, according to Webster's: "a particular appearance or state in a regularly recurring cycle of changes".

The appearance of the moon at any given time is a phase. It'll change appearance in successive days, but it is still the moon, albeit with very different looks as it progresses through its phases.

Rough-legged Hawks do not change form. They are either light morphs (which most birds that appear in Ohio are), or they are dark morphs. If the bird changed appearance from a light type to a dark type over its development, then one might say that the first stage of color form was a phase. But since they don't, one cannot accurately apply the term phase in this case. Again, from Webster, the definition of morph, as the term relates to biology: "a phenotypic variant of a species". And that's what light and dark morphs of the Rough-legged Hawk are - variants of the same species, but stable variants that do not change appearance over time, or phase into other plumages.

Enough of that. A person could easily be bowled over by the dashing good looks of a Rough-legged Hawk even if they didn't know its name, let alone whether the bird should be correctly termed a phase or morph. Also of interest is that the closest breeding Rough-legged Hawks to Ohio are about 1,200 miles to the north. To these hardy raptors of the far north, wintering in Ohio is their Floridian vacation.

this bird can also be easily aged and sexed

These are such beautiful hawks. I have only seen one up close at a wildlife rehab center in Kirkland, Ohio -- at Penitentiary Glen in Lake County. I stood and looked at it for a long time. The hawk was probably wondering if I was a bit loony. But, its markings were just beautiful.

Maybe you were showing off a bit when you made the ID of the hawk from afar. But, that is part of learning to ID birds, right? You learn where they live, how they fly, how they act, etc.

I think I can tell a flying crow from a flying hawk at a distance. You learn wingbeats/flapping, flight characteristics and shapes of birds. It is just part of being out and learning. I'll bet you could tell a robin from a blue jay that is flying by at a distance. They just fly differently. (And, the robins do that tail flick thing when they land.)