Given the oddity of this post's title, and the strange behavior documented below, one might be excused for thinking this to be an April Fool's Day prank. Especially since it is indeed April 1st, and because your narrator is in large part Irish, and we of the Emerald Isle are known for our love of prankery.

But a childish prank this is not. The inimitable Chuck Slusarczyk, Jr., captured the following amazing series of images at Wendy Park in Cleveland. Chuck's images show an Eastern Phoebe dive-bombing into Lake Erie and snaring an (apparent) emerald shiner, Notropis atherinoides. SIDEBAR: Don't come back as an emerald shiner in Lake Erie, or if you must, STAY AWAY from the surface, for Poseidon's sake! Everyone, even adventurous songbirds, wants to eat you!

While a number of general bird-related websites casually make mention that phoebes will take small fish, the actual concrete evidence seems rather sparse. The scientific literature does not seem to teem with documentation. There is a mention of fishing phoebes in a 1926 account in the former journal Bird-Lore. A more robust accounting of this behavior can be found in a 1957 edition of the Auk (74:264-265), in a paper entitled "Eastern Phoebe fishing" by the legendary Laurence C. Binford, who was once a major player in California birding and an ornithological tour de force.

In his paper, Binford describes two phoebes capturing minnows along Lake Michigan at Chicago on the date of - no kidding - April 1st, 1956. Binford and his fellow observer noted the birds capturing a total of seven "small, silvery fish" (also very likely emerald shiners). His description of how the phoebes snared and ate these fish is remarkably similar to the sequence shown in Chuck's photos that follow.

The phoebe is our toughest flycatcher. They're early to return, late to linger, and will often attempt to tough it out in northern winters.This hardiness is in large part due to their adaptability. The favored food are insects in the order Hymenoptera (bees and wasps - told you they're tough!), but no insect is safe near a phoebe. Push comes to shove, and they'll tackle odd fare such as ticks, spiders, and millipedes. And fish... 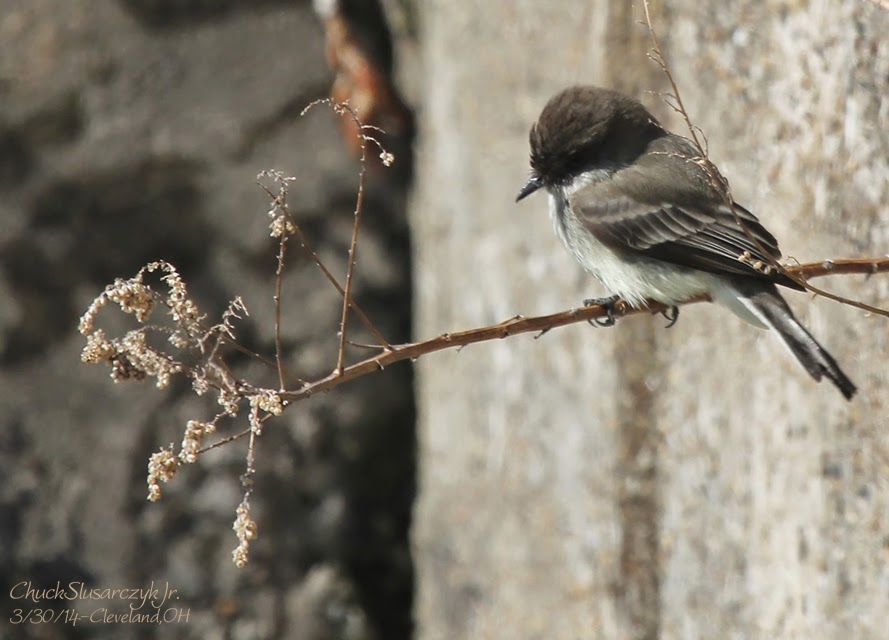 Our piscivorous phoebe scans the waters from a withered stalk of Canada goldenrod, Solidago canadensis. 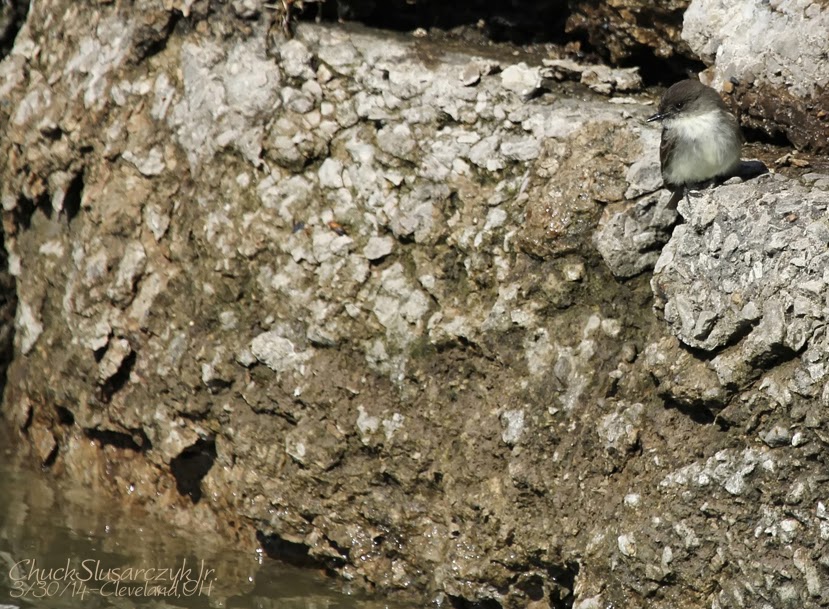 Its interest piqued, the phoebe drops down to a ledge on the cement pier, the better to get a bead on the unsuspecting shiners. 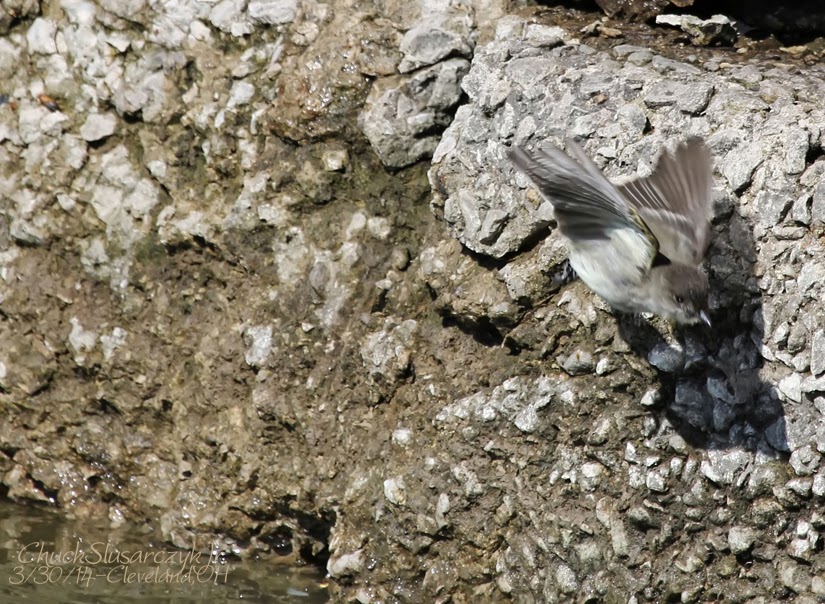 Ah! A target in the sights, the phoebe dive-bombs toward the water. 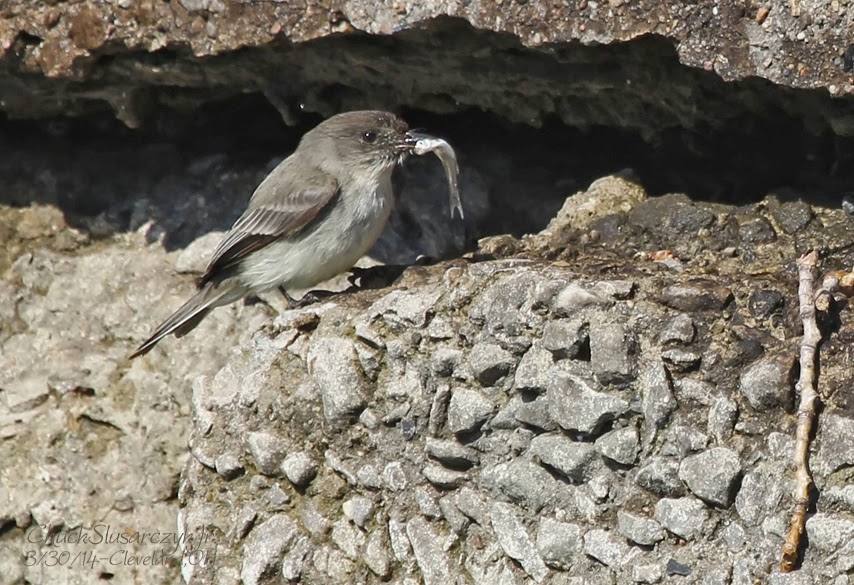 Success! An emerald shiner is pulled from the depths and taken to a convenient ledge for consumption. 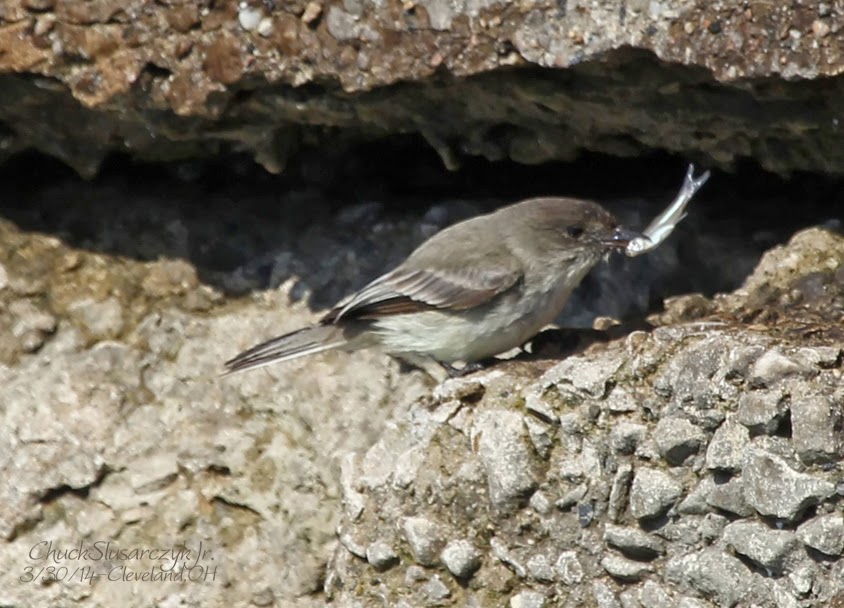 A bit of shaking and tossing, and the flycatcher has the fish turned around and ready for swallowing, headfirst. Somehow the phoebe knows to ingest the shiner headfirst, just as all veteran fish-eaters such as Osprey do. Try this in reverse, and the scales are likely to catch in your throat. 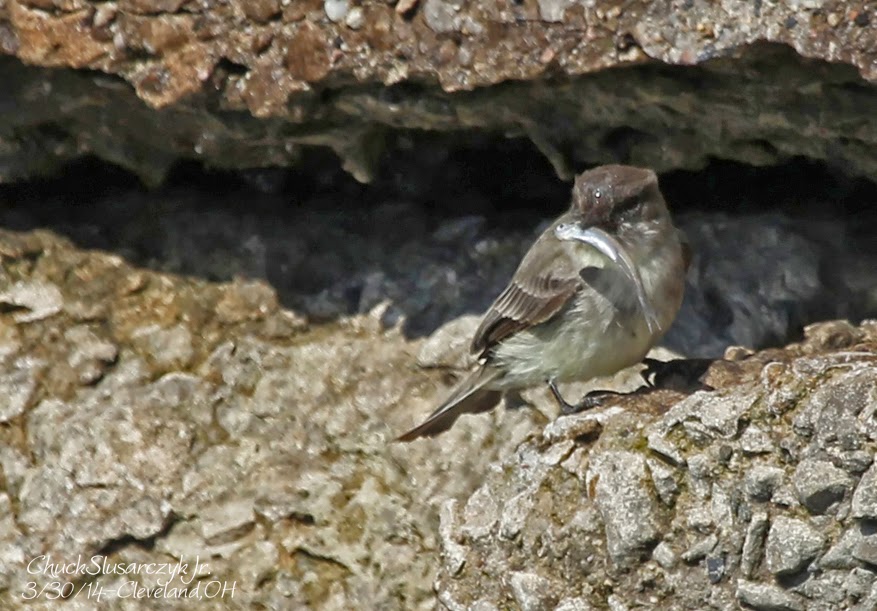 The phoebe holds its prize. This photo probably should have preceded the one above, but I'm feeling too lazy to switch them around. The hapless shiner looks a bit goggly-eyed shocked, but they always look that way, phoebe or not. 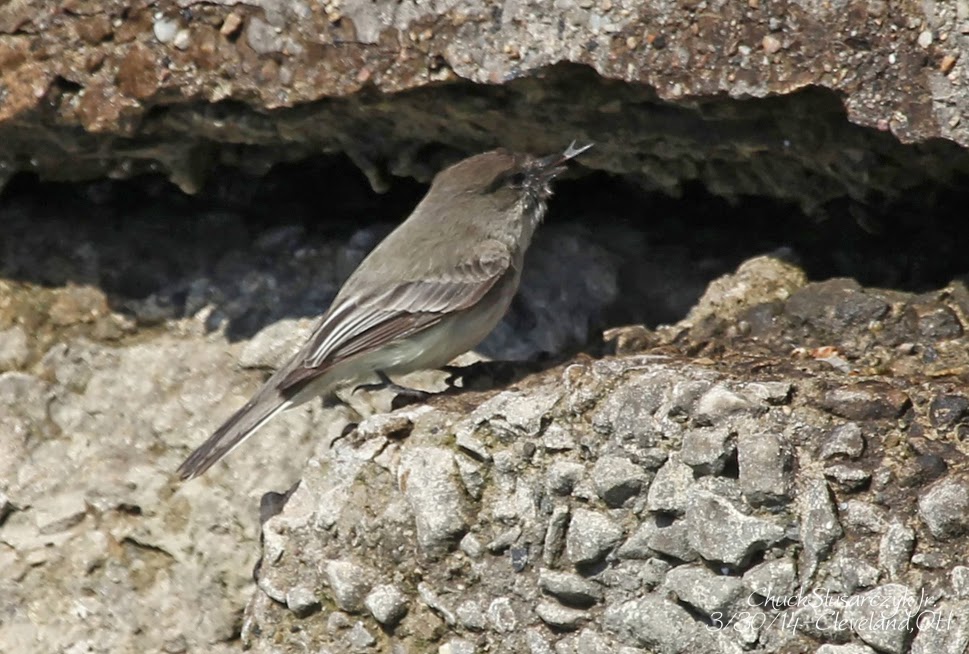 Down the gullet it goes. A bit of sushi can't be bad for the phoebe - certainly more protein there than a beakful of midges.

Kudos to Chuck for expertly photo-documenting this behavior, and sharing his images with us. Who knows, come back in a couple hundred thousand years and there might be phoebe-kingfishers stalking our waters.

I happened on your blog, researching "giant clams olentangy" tonight! Apologies for the off-topic inquiry, but I was delighted to find your space, and thought you might be able to answer my question: My kids (6 and 9) and I were at Highbanks, this afternoon, and my 9 y.o. son picked up a "giant" clam, from the water. We were surprised and tickled to find it alive! We're native Seattlites, in Ohio 5 years, and fairly sure this is no geoduck :) However, it's the first time we've found any clam close to this size--at least 6 inches long, 3-4" across, and 2-3" thick--in Columbus, Olentangy or otherwise. I wonder if you could help us identify it?
Thanks!
Molly

PS: We own and love your Great Lakes Nature Guide! Bought it when we first landed in Ohio.

Fabulous photos. I had no idea Phoebes would eat fish.