A rare plant and Google Earth 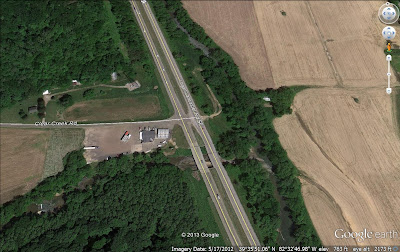 An aerial view, courtesy Google Earth, of the intersection of U.S. Route 33 and Clear Creek Road in Hocking County, Ohio. I recently met someone here for a field trip, and suggested the gas station on the corner as a rendezvous point. Not remembering which type of gas station it was and wanting to tip them to the name, I ducked into trusty Google Earth. 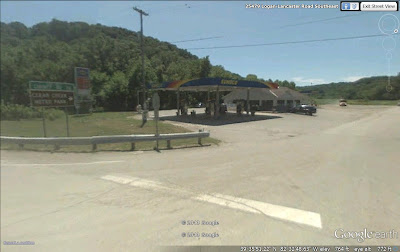 Google Earth has made great strides since its introduction eight years ago. Motorized Googleians have driven nearly every road in the Americas, it seems, and this has allowed for an extremely cool feature known as "Street View". Clicking that allows us to come down to the ground and see relatively high resolution images of the roadway and its roadside attractions.

By entering Street View, I quickly saw that the gas station rendezvous site was a Sunoco, and could pass that info to the other party. I was also interested to see that the imagery, which is probably a year or few old, was made in summer. 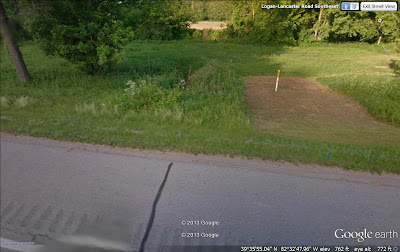 Knowing that a rare plant, Glade Mallow, Napaea dioica, grew directly across from this intersection, in the ground between U.S. 33 and the Hocking River, I toggled the Google Earth Street View camera in that direction.  They make these images with a car-mounted camera that shoots in all directions, and you can scan in any direction from the roadway. So I aimed it into the ditch, and Voila! There was my rare plant. They are the plants capped with white flowers, just left of that area of bare dirt.

Now we're on the ground and your blogger is taking up the camera duties. This image looks north on U.S. 33, and the Glade Mallow grows in profusion between the mowed verge and the trees.

Glade Mallow is a stunner by any botanical standard, and we caught it just as it was entering peak bloom. It is a massive member of the Mallow Family (Malvaceae), and luxuriant stems might stretch six or seven feet skyward. The leaves are roundish and deeply cleft; suggestive of Marijuana on steroids.

The crystalline flowers with pinkish stamens grow in densely capitate clusters. Individually, they seem too small for the robust plant that supports them, but massed in unison all seems in harmony. I personally think Glade Mallow would be an awesome plant for the adventurous gardener, but I rather doubt anyone has taken it into captivity and is cultivating it.

This rather innocuous tubular green bag of goo is one of the reasons why I'm so interested in Glade Mallow. About 20 years ago, I made a collection of Glade Mallow in Pickaway County, Ohio, and upon returning to the office with my material, I dumped it out to sort things. When I handled my Glade Mallow specimen, a beautiful caterpillar just like this jumped from the foliage. I was interested enough that I took it to a lepidopterist who specializes in moths, and he raised it to adulthood. 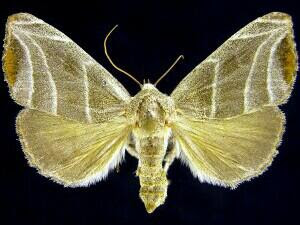 Darned if it didn't turn out to be a major rarity, Bagisara gulnare (a type of noctuid moth; I know of no common name). David Wagner was exceptionally keen to find caterpillars of this species, as no one has reared them or studied the life history. We made attempts to find some last year when Dave was here, but failed. This year, following Mothapalooza, he and I stopped and worked a giant stand of Glade Mallow in Ross County, and within 20 minutes had secured 13 caterpillars. Dave has these livestock in his lab back at the University of Connecticut, and most of them have entered the pupal state. His photo, two images up, is of one of the caterpillars that we captured back on June 16. 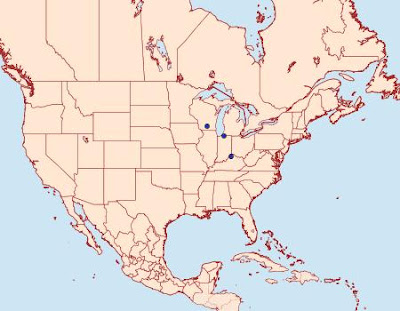 This map needs updated a bit; at least two Ohio dots are necessary. But you can see that Bagisara gulnare is a great rarity, hence our interest. When I found the caterpillar back in the 1990's, the host plant was unknown, so my discovery cracked that code. Now that we know what the caterpillars eat, and when they are out, it should be possible to find additional sites. I'll probably try and get out and check a few places in early August, when the moths should be on the wing, and see if I can find and photograph them.
at July 19, 2013

Awesome post, Jim! I stopped by this very area on my way in to Athens for the weekend. I'd never seen it in bloom before and wanted to check it out for myself. I couldn't agree more it is severely under utilized. Your blog past a few years back on its cousin, Sida hermaphrodita, made me want to experiment with it. This is the third year I've had a transplanted rootball in my backyard and this year the dozen or so stalks I kept are in gorgeous bloom and all nearing 8-9 feet tall. It's such a gorgeous plant; especially early on when it's maturing. I think when it's 3-4 feet high and shrubby is when it's at its most aesthetically pleasing. Maybe ill dig up a rootball of this next early spring and add it to my wildflower garden to compliment the Sida!

I saw some of this stuff growing along US 36 just west of Uhrichsville. I didn't immediately recognize it as a mallow, but your description is very accurate. My first impression was, "Wow, that's a lot of pot."

We have Glade Mallow in our prairie at CJ Brown by the visitor center, it is blooming well this year. In dry years, the deer mow it down. Ours was from Huffman Prairie stock originally the best I could find out. I have seeded it from the original ppatch and have several patches now. Andrew, stop by and see me if you want some closer to home.
That was one I didn't think to show you the other day
Brian Menker

What I learn from reading your blog, which you reinforced most wonderfully at Cedar Bog last week, is that there are wonders before our very eyes everywhere, if we only slow down and take the time to look.

I think this is a really clever way to use Google Earth/Maps' Street View.

I read about a hawk researcher in the Midwest who successfully used Google Earth/Maps to locate good sharp-shinned hawk nesting areas. I think he was in Minnesota. I can't locate the website right now. I know he searched for certain types of conifer forests.

I also know of a local birder in NE Ohio where I live who used Google Earth/Maps to locate possible woodcock staging areas.

I do enjoy your blog a great deal. You post a lot of wonderful articles on a lot of different subjects.

I see that anonymous has already told you what I was going to tell you. I just saw this plant for the first time last weekend at Buck Creek State Park by the visitors center in the planted prairie!!

Jim, I used Google Earth/Maps Street View earlier this year to track down some Burrowing Owl sites in Florida. You could easily see the T shaped perches that were placed near the suburban burrows.