You, I trust, would not want to look like a bird dropping. But plenty of organisms do. Well, they don't really "want" to look like goop that was just expelled from the aft end of a Blue Jay, but they do anyway. Evolution has wrought all manner of fantastic camouflage over the eons, and the suite of bird dropping mimics are but one small facet of the myriad masters of disguise in the animal kingdom. If you're small and edible, it can pay big dividends to look like something so nasty and unpalatable that even a cockroach might pass you by.

A recent experience with this spring-legged little critter steered me into blogging about the admittedly weird subject of bird dropping mimicry. I exited my house the other night, and as always, cast an appraising eye over the walls in the vicinity of the porch light. Lots of moths and sometimes other interesting insects are lured to the light's sphere, and I never know what I'll see. On this night, it was this thing. At first blush it appeared to be a small moth, but as I moved in I saw that it was a leafhopper. As I would later learn, a leafhopper with no formal name other than Norvellina seminuda. And it seems apparent to me that N. seminuda is out to look like a bird dropping. It's certainly got the coloration and pattern down; morphology it shares with other quite unrelated species, as we shall see. 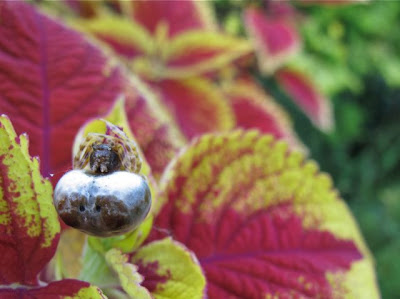 If this creature, which is straight out of bizarro-land, isn't a bird dropping mimic, nothing is. No one in their right mind would attempt to eat it. If you can't even tell what it is - forgiven. I wouldn't have known either, not so long ago. We're looking at a female Bolas Spider,Mastophora hutchinsoni. During the day, she'll rest motionless and out in plain sight on the upper surface of a leaf, relying on her unsavory appearance to discourage would-be predators.

At night, the spider stirs to action and employs one of the wildest hunting strategies of any animal, spider or otherwise. Read about the Bolas Spider's amazing predatory tactics on Julie Zickefoose's blog, HERE.

John Howard pointed this little beast out to me on a field trip last August. He had learned about the curious caterpillars of the Rose Hooktip moth, Oreta rosea, some time ago and knew to carefully scan the foliage of viburnums, such as this Arrowwood Viburnum, Viburnum dentatum. Instead of hiding somewhere during the day, as most caterpillars do, the Rose Hooktip larva just curls up in plain view, looking all the world like a freshly deposited bit of nastiness. It'd be quite easy to pass right by this animal without it even registering.

We move in closer, and can now easily see that the "bird dropping" is clearly a caterpillar. The Rose Hooktip follows about every rule in the bird dropping mimic playbook. It's in plain view, curls its body into a J-shape, and has dull irregularly patchy mottling.

This is an adult Rose Hooktip moth - a beauty that doesn't even remotely resemble the ugly duckling from which it was spawned.

David Wagner pointed this one out to me on another field trip this summer, and it stumped me. This is an early instar of the fabled Hickory Horned Devil caterpillar, and I had no clue that these cats were bird dropping mimics in their early stages. Yet here it is, and it's doing everything that a good bird dropping mimic does.

This is the last instar, or growth stage, of the Hickory Horned Devil. After molting out of its shy and retiring bird dropping mimic younger stages, the by now hotdog-sized caterpillar of the Regal Moth, Citheronia regalis, adopts a shock and awe predator deterrence strategy.

Perhaps the most accomplished of the butterfly caterpillar bird dropping mimics are the Viceroy, Limenitis archippus, and this crazy looking critter - the larva of the Red-spotted Purple, Limenitis arthemis. It looks astonishingly similar to the expulsions of a grackle oozing down the twig. Distinctly untasty in appearance. Ironically, it will eventually morph into one of the most stunning butterflies in North America.

It isn't just caterpillars that adopt the look of bird poo - plenty of adult moths also take on this look. This is a Beautiful Wood-Nymph, Eudryas grata, a common moth in these parts. They rest on leaf surfaces during the day, and can fool even the sharpest eye from afar. The icing on the bird dropping mimicry cake is the wet shiny sheen to the moth, as if it had just been voided from the bowels of a songbird.

Seen from another angle, the Beautiful Wood-Nymph is indeed beautiful - cute, almost.

Even the best bird dropping mimics don't fool everyone. This moth - I'm unsure of the species - had fluttered to the blossoms of a teasel, seeking nectar. Unfortunately for it, an assassin bug lurked within the flowers, and instantly seized the moth, apparently not at all put off by its unsavory appearance.

Terrific piece, Jim! I too dig the "shiny surface" ploy. Even when the highlights are white markings. Blows my mind. Thanks for the link!

A few minutes ago I discovered one of these on my screen door in Asheville in Western NC mountains -- wondered at first what bird had that kind of aim, but then noticed how symmetrical the "dropping" was. Had never known of this kind of disguise and found your article so interesting. Thank you. Air F.